Get Out Of Jail Free Cards 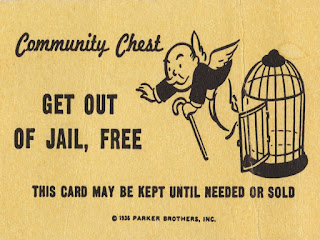 We were told for decades that Investor Settlement Dispute Mechanisms were essential in the new globalized economy, because they spurred economic growth.  But, after thirty-five years, the evidence is in. Murray Dobbin writes:

He points out that "…ratios of world trade to output have been flat since 2008, making this the longest period of such stagnation since the second world war. According to Global Trade Alert, even the volume of world trade stagnated between January 2015 and March 2016…"

In addition, says Wolf, "The stock of cross-border financial assets peaked at 57 per cent of global output in 2007, falling to 36 per cent by 2015." Foreign direct investment has also declined.

So if global trade isn't going to pull the world economy out of its persistent doldrums, why are countries putting so much political energy into signing these agreements? They do little or nothing to enhance growth in global trade -- trade is driven by global demand -- also flat. Amongst the countries primed to sign these agreements trade is already virtually tariff free.

Even the government's Global Affairs department's recent analysis estimates the Pacific Rim deal, the TPP, would increase GDP by a minuscule .127 per cent ($4.3 billion in a $2 trillion economy) -- but not until 2040! In short, we will gain virtually nothing.


So, if they don't catalyze growth, why do governments keep insisting that IDSMs be included in trade deals?

Over the past 10 years ISDS provisions in literally thousands of agreements have become tools for criminals, greedy law firms, and "investors" in ISDS cases.

In an excellent four-part series, Pulitzer Prize-winning investigative journalist Chris Hamby reveals that: "Companies and executives accused or even convicted of crimes have escaped punishment by turning to this special forum."

Hamby cites several cases: "… an Egyptian court had declared a foreign company's purchase of a factory corrupt and nullified the deal, court records show. But after the company filed an ISDS claim, the government agreed to pay $54 million in a settlement…"

In another, two financiers had been convicted of embezzling $300 million from an Indonesian bank but used an ISDS finding to force Interpol to back off, protect their investment, and "…effectively nullify their punishment."

Hamby found more than 35 cases where "…the company or executive seeking protection in ISDS was accused of criminal activity, including money laundering, embezzlement, stock manipulation, bribery, war profiteering, and fraud." One ISDS lawyer admitted privately: "You have a lot of scuzzy sort-of thieves for whom this is a way to hit the jackpot."

If it's it not criminals escaping justice, it's corporations gaming the system, perverting it so that the profit comes not from a planned or existing investment but from the increasingly enormous settlements demanded of governments if they win an ISDS arbitration.


As in the old board game, an ISDM  is a Get Out Of Jail Free card.

Image: clipartbest.com
Posted by Owen Gray at 6:01 am

Whilst "trade" agreements may have some value the ISDM clauses being built into them have no value except to multinationals who wish to subvert a country's regulations. That they pressure a country to avoid putting environmental rules in place that may impact such companies or to use domestic suppliers even if the cost is a little higher is a further insult. Why governments sign such clauses is beyond my understanding.

I suspect they have been well paid, Rural. After all, they spend a lot of time raising money.

I wrote a post this morning on free trade deals, Owen, and one of the things I discovered is that the CETA 'enhancements' that Trudeau poodle Chrystia Freeland has been extolling are nothing more than empty rhetoric and motherhood statements. She and Trudeau clearly believe that Canadians are either to apathetic or too somnolent to discern the truth.

The investor class may change parties, Lorne. But they get the same benefits.

why do they care and we dont? Brainwashed by the corporate media? Apathetic to the max, or just given up?
http://www.zerohedge.com/news/2016-09-18/300000-join-massive-protests-germany-against-us-eu-corporate-trade-deals

Lorne said, "She and Trudeau clearly believe that Canadians are either to apathetic or too somnolent to discern the truth."

Most are. Worse, they don't want to hear it.

Apathy is the enemy of democracy, Toby.