Confronting It Head On 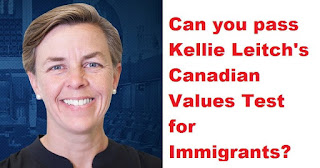 Kellie Leitch has caused a great deal of controversy with her suggestion that we screen prospective immigrants for "Canadian values." Actually, she's touching a nerve which predates Confederation. Desmond Cole writes:


Many have criticized Leitch’s proposal by saying it is impractical, since no one person or group can define or determine Canadian values. That’s a nice idea, but in practice we know the values our politicians attempt to sell us are a reflection of our colonial, white, British, monarchical heritage. There are such things as Canadian values, and they explain how our politicians have been peddling a fear of foreigners for the last 150 years.

Suspicion of all immigrants who are not white, or are not members of the former British Empire, is a Canadian value. Canada’s founding prime minister, John A. Macdonald, argued that Chinese immigrants to Canada were unfit to vote because they exhibited “no British instincts or British feelings or aspirations.” Macdonald didn’t need to cloak the authority of the state in the language of wanting a “conversation” about immigrants, as Leitch does today. In his time, there was no conversation to be had.

That's an inconvenient truth which we would much rather forget:

Of course, all of this is only possible because of another fundamental Canadian value: erasure. Our modern mythology suggests that indigenous people were never here, or that if they were, their values and customs gave way to a superior British way of life. Our history books and our educational resources for prospective new Canadians have little to say about the values and traditions of indigenous people. British colonialism made outsiders of people who had been here for thousands of years, and cast their values aside.

That’s how a white man in a red coat who carries a weapon and patrols stolen land has come to symbolize the enforcement of Canadian values. We are taught to honour the force Mounties used to Anglicize this land, to view the guy in red as a symbol of honour and patriotism, no matter what despicable crimes he carries out. The values of dominance and separation enforced by the modern RCMP, and the Canadian Border Services Agency, are not universal or self-evident — they are steeped in centuries of racism, colonialism, and white supremacy.

Leitch is not allowing us to forget our past. The question is, "Do we have the courage to confront it head on?

Image: thebeaverton.com
Posted by Owen Gray at 8:29 am

A very good point, Owen, although I am still waiting for Leitch to use the term 'old stock Canadians, as her former master did.

That term "old stock Canadians" captures the prejudice exactly, Lorne. It tells you a great deal about the man who used it.


Leitch revealed a little more of her Trumpian nature yesterday when she denounced her critics as "elites." I wonder if she has calculated that, if only she can dig in on the values issue and keep her leadership candidacy intact long enough, she'll turn her party, force them to fall in line. Already that moron, Tony Clement, has shown himself willing.

What is truly amazing about these folks, Mound, is that they are so incredibly dense.

We can tell the degree to which people's rational powers have declined by this fairly simple fact: a shocking number of average people see nothing anomalous or ironic when rich politicians condemn their opponents as elites. Leitch is a wealthy surgeon and Trump was born a billionaire yet they condemn others as elites. Our society is becoming irony impaired.

That's a good phrase, Kirby -- irony impaired. The pot calls the kettle black and no one notices.

"irony impaired" - I love it. Kudos to Kirby

You see all those bad dispicable barbaric people, thats us.

Unfortunately, Steve, Leitch doesn't see things that way. For her, that's them.

What is truly amazing about these folks, Mound, is that they are so incredibly dense. What do we say about those that vote for them? I live in Clements riding and during the election campaign not a word was spoken by Clement yet he was voted right back in by those very supporters whose intelligence must be questionable.

Appealing to ignorance -- in many of life's aspects -- can be highly profitable, Anon.