The Reincarnation Of P.T. Barnum 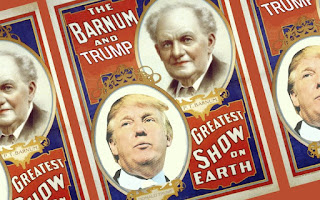 Yesterday, Donald Trump walked away from his claim that Barack Obama was not born in the United States and, thus, not qualified to be president. He then took no questions and walked out of the room. The vociferous lie which he has repeated for five years went down the Memory Hole. And the polls tell us that Trump and Hillary Clinton are running neck and neck. Andrew Coyne asks, "Who's to blame?"

Who should we fault for this disaster? Should we blame his enablers in the Republican party? But which ones? The aging opportunists like Newt Gingrich or Rudy Giuliani, who see in Trump their last chance at power and can’t be bothered to worry about what he represents? Or the equivocators, the odds-checkers, once-respected figures like Paul Ryan or Marco Rubio, who know that Trump is the death of everything they claim to care about but sign on anyway, though only after weeks of contemptible public agonizing — as if the choice were truly difficult? As if they were not weak men following their desires, but good men trying to do right? As if their eventual decision were ever in doubt?

Should we blame Trump’s rivals in the Republican nomination race? They who might have stopped him early, but chose instead to parley with him, thinking his support would prove fleeting, preferring to turn their guns on each other. Even when it became apparent that Trump’s support was real, each calculated he could be the one to face him one on one — each thinking he need only outrun the others, not the bear. Until the bear consumed them all.

What about the media? Should they wear this? For granting him such easy access to air time, all those “phoners” to friendly hosts, when he had nothing to say? For devoting vast hours to his inane rallies in the hopes, often gratified, that someone would get beaten up, but in the certainty that large numbers of public would be attracted either way? For succumbing to Trump’s months-long war of attrition on human reason — the insults, the craziness, the elemental errors, the literally hundreds of lies, by which Trump advertised his Olympian disdain for any of the usual standards of behaviour, and so made it impossible for anyone else to hold him to account? For failing to break out of the trap of journalistic balance, when the alternatives are a flawed but quotidian candidate on the one hand and a sociopathic, race-baiting manchild on the other?

Should we blame the excesses of identity politics, the obsession with racial and sexual differences to the exclusion of individual rights or common human values, the assertion that society is a zero-sum conflict between ceaselessly warring groups, providing the opening for Trump to emerge as the champion of white male identity politics? Should we blame the stratification of society by class, class defined not by income or birth but by education and culture, the higher educated and the less so separated by a widening gulf of mutual resentment, such that whichever candidate the former are for the latter are against?

Is it the fault of the Democrats, for nominating a candidate as unelectable as Clinton? Should we blame the Clinton campaign for its inability, notwithstanding the millions of dollars and masses of manpower at its disposal, to put away a candidate as monumentally beatable as Trump? Do we blame the voters, for not doing their homework, exercising judgment, or just basically paying attention?


Coyne's last suggestion is the most telling. We should blame what increasingly seems to be a majority of American voters, who can't -- or won't -- recognize the reincarnation of P.T. Barnum. Trump knows how to manage a circus. But he knows nothing about being president.

Image: the dailybeast.com
Posted by Owen Gray at 8:25 am

I think we should blame the masters of the Universe represented by Hillary Clinton. If Bernie Sanders was the canditate, he would be leading by 30 points.

The Powers That Be weren't Bernie's friends, Steve.

I agree with Steve. "The Powers That Be" are only friends with themselves. The rest of us get to play the game but the game is rigged; we don't get to win.

Yes it is called that and who better to be potus than a casino owner. Lotta frickin' idiots around, Owen.

Barnum was credited with saying, "There's a sucker born every minute," Dana. I'm not sure he said that. But I am sure the statement is true.

He didn't say it actually. Someone said it of him. Someone who was unaware at the time he said it that Barnum had just made him a sucker twice over.

An even more perfect analogy perhaps.

" Mr. Trump has reaped at least $885 million in tax breaks, grants and other subsidies for luxury apartments, hotels and office buildings in New York, according to city tax, housing and finance records."

That's only for NYC. Everywhere else he has any properties there's certain to be more subsidies and breaks.

And he's the hero who's going to make all the problems go away according to so many simple minded idiots.

What a fucked up age we live in.

When politics become entertainment, Dana, the protaganists become actors. And a good actor hides his or her true nature.

Its a race to see who has gotten more ill gotten gains from the American Taxpayer, Trump not yet at a Billion , Hillary got a couple on him, but the game is not yet done.