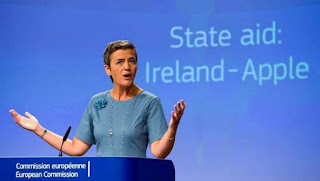 Last week, the European Commission slapped Apple with a $14.5 billion bill for back taxes. Apple CEO Tim Cook said that Apple had worked out a deal with the Republic of Ireland. He even got the U.S. Treasury to complain on his behalf. But, Alan Freeman writes, no one should shed any tears for Apple:

So Apple has been able to shift billions of dollars of sales and profits to Cork in Ireland, rather than pay taxes in the countries where their products are actually sold.

Apple wasn’t satisfied with paying 12.5 per cent, though, so it cooked up a deal with the Irish government which has allowed it to avoid virtually all corporate taxes. According to the Commission, Apple paid just 1 per cent of its European profits in taxes in 2003 and an infinitesimal 0.005 per cent in 2014.


For the last thirty-five years, that's how the game has been played:

Apple, like all corporations, aims to make as much money as it can, and pay as little in tax as it can get away with. The company’s executives may dress casually, it may sponsor hip advertising and fabulous design, but it’s fundamentally no different than the railway and steel monopolists of a century ago. If only they would admit it.

What’s infuriating about Apple and Tim Cook is their habit of insisting that they’re playing on a higher moral ground. “When you’re accused of doing something that is so foreign to your values, it brings out an outrage in you, and that’s how we feel,” Cook said this week. “Apple has always been about doing the right thing. We haven’t done anything wrong and the Irish government hasn’t done anything wrong.”

Now, we’ve all been told by accountants and lawyers that tax avoidance is legal while tax evasion isn’t — but what Apple and its ilk are doing is taking advantage of every possible loophole and extracting every concession they can from governments to make sure they pay as little as possible in taxes. Is that “doing the right thing”?

As of June, Apple was sitting on $215 billion in cash and assets outside the U.S., where the money can remain tax-free indefinitely as long as it’s not brought home. Cook says he would love to return at least some of this money to the United States — but he doesn’t want to pay the 35 per cent tax rate. “I don’t think that would be a reasonable thing to do,” says Cook.


So, just was is reasonable?

Image:scoopnest.com
Posted by Owen Gray at 8:47 am

It appears many multi nationals have been using Ireland as a Maytag. Whats crazy is the Irish goverment is fighting the ruling. I estimate they could get a $100 billion windfall. Whose side are the politicians on anyway?


Ireland seems to have become Europe's Cayman Islands. It's more cosmopolitan that Jersey or the Isle of Man and English-speaking (well sort of) unlike Luxembourg. My daughter works for Oracle at its Dublin offices. Same story.

The place has changed a great deal since my great grandfather left -- at the age of twelve -- and settled in the Eastern Townships, Mound.

Remember, Steve, what doesn't get paid in taxes winds up in somebody's hands.

If Apple owes The European Union back taxes Owen, why can't the EU go after Apple legally, just like they do when a regualar individual doesn't pay their taxes.

I assume there must be some kind of legal remedy available to them, Pam. But I suspect they're trying to send a message to other Apples.

Former cons in Alberta wrote in some state aid for their buddies, now the NDP is calling thier bluff.

Thanks for the link, Anon. The chickens have come home to roost.