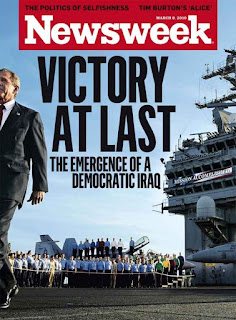 The War on Terror began on this date fifteen years ago. Tony Burman writes that, fifteen years out, some lessons are crystal clear:

First, it was preventable:

The former president, George W. Bush, will be mentioned often in anniversary ceremonies. People will speak of the surprise of the 9/11 attacks and the resolute way that Bush responded. But not mentioned will be that Osama bin Laden was already a known threat when the Bush administration took over. On Aug. 6, 2001 — a month before 9/11 — an intelligence memo to the president was headlined, “Bin Laden Determined To Strike in U.S.” Bush was on holiday at the time and he remained on holiday after the briefing.

In response, the Bush administration decided to go after bin Laden by invading Afghanistan and then, in 2003, Iraq. It was a colossal blunder that must have fulfilled bin Laden’s dreams. Immediately after 9/11, the U.S. had the support of most of the world, including the major Middle Eastern powers. Had the U.S. acted in moderation, bin Laden himself would likely have become marginalized in the region, shunned by the very people whose support he sought. Instead, a series of military adventures not only cost billions of dollars and thousands of lives, but also bolstered bin Laden’s reputation in the region.

By pursuing an unwinnable military response, America’s cause was lost. And the implications of this debacle are still being felt. The focus was on the battlefield — wherever that might be in an era of terrorism. Left neglected were the root causes of terrorism’s appeal in the Middle East: the failing education systems, rampant government corruption, endemic poverty and the oppression of women at a time when their skills and talents were so desperately needed.

Fourth, the costs have been astronomical:

Sunday’s ceremony will celebrate the 2,977 innocent people who lost their lives on 9/11. That is an awful toll resulting from a heinous crime, and that should be stated. It actually has been, often, but it is easy to lose perspective. In the U.S. last year alone, 13,286 people were killed by gun violence. As a result of the military response to 9/11 in Afghanistan and Iraq, hundreds of thousands of innocent civilians were killed, as well as more than 5,000 American soldiers.


And, lastly, the war has given birth to the surveillance state:

The ferocious military action, not only by the U.S. but by governments everywhere, had a catastrophic impact on human rights. Governments used 9/11 as a pretext to curtail freedoms, squash political dissent and create a mushrooming surveillance state that is with us to this day.

After all the flag waving and drum beating, it's clear that the War on Terror has been just another chapter in The March of Folly.

Email ThisBlogThis!Share to TwitterShare to FacebookShare to Pinterest
Labels: The War On Terror

And I think it is safe to add, Owen, that the Americans will have learned nothing from these blunders. After all, when you are 'the greatest nation on earth,' humbling introspection is hard to pursue.

The fact that Donald Trump is the Republican nominee underscores that fact, Lorne. Last week one of Trump's biographers appeared on PBS. Asked about Trump's business acumen, he said that Trump was not like John D. Rockerfeller or Steve Jobs. He was more like P.T. Barnum -- the man behind the "Greatest Show on Earth."

I wonder if we will ever recover from 911? IMHO it all started with the Treaty of Versilles.

A lot of the problems in the Middle East stem from the way that part of the world was divided up after World War I, Steve.


I think Steve has the wrong treaty. It was the treaty of Sevres in 1920 and the follow on treaty of Lausanne three years later that created the foundation for much of the Middle East chaos of today. These instruments ignored the ethnic, sectarian and tribal realities of that region and instead carved out nations to suit the convenience of France and Britain. This is one key reason why many insist partition is essential to achieve lasting peace in Iraq and Syria.

Hubris often comes with a pricetag of hundreds of thousands if not millions of lives lost. The First World War was sparked by hubris. So too was Hitler's Operation Barbarossa, the invasion of the Soviet Union. The Bush/Cheney regime's decision to conquer Iraq as a lesson to the other nations of the Middle East was pure hubris. And what follows Hubris? Nemesis.

That pattern is as old as the human race, Mound. And we keep repeating it.

I understand, Steve. I merely point out that the present problems there stem from the aftermath of that War.

Mustn't forget the oft forgotten Sykes-Picot Agreement. ISIL often talks about reversing the effects of this.

It seems odd that people insist on treating 'the War on Terror' as if it were anything but 'The War of Terror'. When police and 'security' have activities characterized by ginning up suckers to be charged as 'terrorists' after being incited by those very departments, a rat should definitely be designated as smelled. Saddam Hussein was put inplay by the C.I.A. as a stabilizing force to repress dissent - and to war on Iran for having the alleged temerity to overthrow their puppet ruler. I say alleged vecause there is reason to suspect the religious leadership of Iran is another sectarian smoke screen. Certainly for nations retooling their WMD the prospect of other nations protesting their presence is cause for representing them asw 'the real danger' - a ridiculous proposition wherin people without WMD are penalized as if they were misbehaving. The State Department very clearly planned thge Iraq invasion as a means to 'decapitate governments in an arc of oil bearing regions of the Middle East and Afgrica' as per the 1999 War Game 'Post Saddam Iraq'. Nor has there been adequate coverage of Bremer's 100 Orders dissolving the Iraqi constitution and imposing foreign rule over resources. The PNAC has hardly been subtle - but the effects of its policies are plain to see.

Precisely, opit. The effects are plain to see.

An important piece of history, Dana. The conflict is all about redrawing lines that are one hundred years old.

" The conflict is all about redrawing lines that are one hundred years old." Colonel Lawrence would recognize those ideas.

He understood precisely what would happen, opit.