That's When It Gets Tough 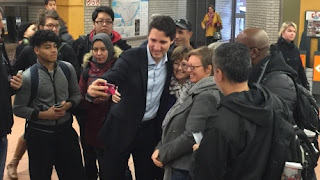 The pundits are increasingly sceptical about Justin Trudeau. Nevertheless, Gerry Caplan writes, the public's love affair with him continues. Even columnists for The Toronto Star -- which generally supports his initiatives -- are beginning to show their cynicism:

Take a column this past weekend by the scrupulously non-partisan Susan Delacourt. Like so many of her peers, Ms. Delacourt did not at all appreciate Stephen Harper’s open contempt for the press gallery. So for most reporters, Mr. Trudeau’s openness and accessibility was a breath of fresh air. Now his shtick has turned to hot air.

Mr. Trudeau’s press conference last week, Delacourt wrote in last Saturday’s Star, “was a remarkably answer-free encounter with the parliamentary press gallery, in which one had the sense the Prime Minister was trying to prove that he could smile and speak for 20 minutes without saying anything.” She offers this warning to the PM: Voters can “take only so many platitudes and winding, wordy detours around hard truths.” Harsh stuff.

And, likewise, for Tony Burman, the bloom is coming off the rose:

Similarly, Tony Burman, former head of CBC News, ridicules Mr. Trudeau’s speech at the UN last week (to a hall two-thirds empty, it was not often enough noted). Mr. Trudeau was peddling his usual “We’re Canadian and we’re here to help” rhetoric. Mr. Burman comments acidly: “If only life were that easy.” And a Globe cartoon shows Mr. Trudeau as all sizzle, no steak.

Smiling images will only get you so far:

These scornful and disappointed observations seem to me to encapsulate much of the reaction these days to Mr. Trudeau’s endless sunny days. Nothing is as easy as Mr. Trudeau always implies, from pipelines to reconciliation with our indigenous peoples. Yet he must produce something, indeed many things, in the next few months, or he’ll be a laughingstock. But of course he risks being a laughingstock if he fails to live up to his own hype. This is a man who increases expectations every time he speaks, who can’t seem to distinguish between aspiration and reality, and he’s doing himself no favours.


All political honeymoons come to an end. And that's when it gets tough.

If he is smart he should do a dumpster dump. Unlike Harper his cabient can run policy. Do all now.

There are quite a few things that will take a lot of time and effort to accomplish, Steve.


I think Justin has painted himself, his government and his party into a corner of his own choosing. He's just never had the spine to become the prime minister he promised Canadians although he still likes to present himself as such. He's riding a wave of celebrity without a commensurate demonstration of the talent we expect to accompany it. Liberals exalt in his popularity but I reckon there's plenty of them nervous about the Dauphin's mid- to long-range prospects. Harper with a certain photogenic flair.

He's had an easy ride so far, Mound. From here on, he'll have to do more than control his image.

The more Trudeau will not be able to articulate his justification of his neoliberal policies, the less he will want to speak to the media, or to the public." All political honeymoons come to an end. And that's when it gets tough." So True Owen.

Trudeau does not understand the ideas his policies rest on, so he will not be able to explain
to Canadians why he has chosen these policies. Platitudes won't do.

I think the more he realizes that he just doesn't know and people start to comment on his lack of knowledge the more he'll remain out of the public eye.He and his government will go underground and that underground will be where they govern from.

When the going gets tough and it will get tough, I think he will turn and run. Sadly , courage is not genetic.

There is no lack of knowlege with someone who becomes PM. The art is to take your vision and apply it to Canada. Chretien chose just to be a good manager,and I think JT is in his mold.

I have to say that I still hold out hope for him, Pam. But I am disappointed.

Wonder whether the Lib. supporters who were upset when some of us had referred to Trudeau as Harper-lite in his policies (though obviously not in his personality) will still try to defend him? Yep, the fossil fuel community is high fiving this decision (approving the Petronas pipeline).

Recall that Trudeau had once said that the only difference between his government and Harper's will only be in tone (tried to look for the exact link to post here but it was long ago so I am not pulling it up; however, I distinctly remember thinking, boy, will those progressives who voted for him and his party be surprised (I have always regarded him as a Blue, not Red, Liberal).

Well, he does still have time to pretend to be a progressive: more pipeline decisions coming up soon.

Failing that, he can always vote with the ex Harper party to forestall electoral reform and maintain the FPTP system and bet that voters are still angry enough at the other natural governing party to give him another 4 years. With the FPTP, he might even pull off another majority with 39% of the votes. Lol.

His decision on electoral reform will show his true colours, Anon.