Words To The Wise 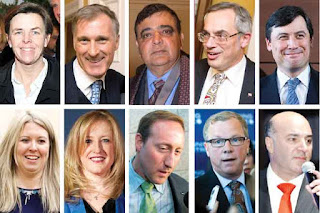 The Conservative Party, Lawrence Martin writes, is at a crossroads. But they seem to be tempted to offer more of the same:

Although they lost the last election, there are few indications our Conservatives are bent on major change. The leadership candidates who appear to have the upper hand are vigorous right-siders. Anyone thinking Tony Clement lacked hardline credentials need only look at his security platform laid out this week. Throw people considered to be potential terrorist threats behind bars without trial, he said, if they cannot be monitored 24/7.


The problem is that what they offer only appeals to their base -- which admittedly is unshakable. And party moderates don't seem to have strong voices:

Peter MacKay, who wasn’t really moderate to begin with, has backed away. Michael Chong has talent and integrity but is too mild-mannered to mount a strong charge. Deepak Obhrai is well-meaning but won’t get to first base in the balloting.The wets might consider Cape Breton, N.S., native Lisa Raitt one of their own. Now that Mr. MacKay is out, Ms. Raitt, who performed capably in cabinet, will enter the race. As a Maritimer she’s a more compassionate conservative and may be the best hope for change.


Certainly they need a change in tone. But they need more than that. Martin warns:

If they stay on the wide right flank, if they don’t make a concerted effort to broaden their appeal, they’re taking a big risk. With the New Democratic Party shipwrecked, the Liberals can draw on major support from the left. Leave them the centre as well and it’s game over.


Words to the wise.

If you lock up enough voters you can win elections with the base that is not touched.

But locking them up, Steve, means that you have to leave your own backyard.