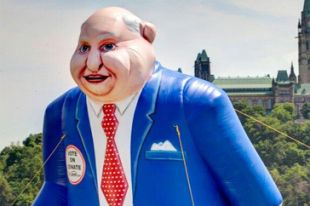 Last week, two of the movers and shakers in the Prime Minister's Office announced that they were giving back part of the money they had received to move from Toronto to Ottawa. They were followed by two other staffers -- for Ministers Dion and Bains -- who refunded another $55,000 to the federal coffers. Michael Harris writes:

After asserting that they had broken no rules, the PM’s prodigal aides followed a step further in [Mike] Duffy’s shoes. They both claimed that there were elements of their relocation expenses that made them feel uncomfortable at the time, just as Duffy had testified in his own defence.


But then they went further:

Butts and Telford expanded the Duffy Doctrine. In their ‘mea culpa,’ they said they now felt strongly that the rules they followed in filing their moving expenses were so utterly, egregiously, and inherently wrong that they voluntarily returned a portion of their jammy reimbursements.


The Conservatives, of course, were cackling -- forgetting that it was they who made the rules:

If the rules are, as Conservative MP Candice Bergen claims, a personal ATM for the current government and its minions, it was Stephen Harper who handed out the debit cards. In fact, Harper’s PMO approved nearly $325,000 in relocation expenses during its tenure, including $93,000 in moving expenses for one senior ministerial aide. In court, they call that a precedent.


But arguing over who made the rules is pointless. Since Senator Duffy's trial, things have changed. Our age is still officially recorded as "A.D." But, in Ottawa, that acronym has taken on new meaning. From henceforth it will mean "After Duffy."

Image: orleansstar.ca
Posted by Owen Gray at 8:32 am

I was at Word On The Street yesterday, Owen, and the issue of moving expenses came up at the Star tent political discussion. For what it's worth, Chantal Hebert was of the opinion that they likely never saw the costs. Based on her own experience years ago, at a time when the CBC was covered under the same rules as apply to government moves, she said that she was asked to get three quotes and choose one of the companies, after which she simply signed something to get things moving. She never saw what the total expenses would be.

That's interesting, Lorne. The Conservatives, as was the case for ten years, are unashamedly hypocritical. But the Liberals would be wise to remember that, in the wake of the Duffy trial, things have changed.

It's still a picayune teapot, with or without Harris.

I agree, Dana. But in an age when politics is about personal destruction -- and Duffy stands as Exhibit A -- it's wise not to suffer wounds that are unnecessary.

I don't know, Owen. Duffy was an attempted assassination that blew up in the assassin's face.
As I understand it, he's still collecting the out of town living allowance. So too are others in precisely the same situation such as Carolyn Stewart Olsen.