His Word Is Not His Bond 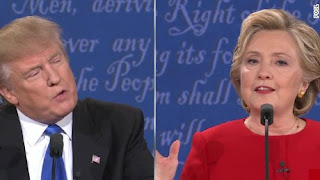 Following last night's debate, NPR fact checked the statements of both candidates. It should come as no surprise that much of what Donald Trump says is patently untrue. Consider just a few examples:

Trump said, "You look at what China is doing for country in terms of making our product, they're devaluing their currency and there's nobody in our government to fight them."

According to Anthony Kuhn, NPR's International Correspondent, "In fact, over the past two years, Beijing has been selling off some of its roughly $4 trillion in foreign exchange reserves to prop up the value of its currency, the Renminbi or Yuan. This has contributed to a lower U.S. trade deficit with China. Beijing allowed the RMB to appreciate against the dollar for about a decade until 2014, leading the IMF to judge the RMB as fairly valued in May of last year."

Marilyn Geewax reports, "Unemployment in Michigan is 4.5 percent; Ohio rate is 4.7 percent. Both are better than the national average of 4.9 percent."


Trump said, "Under my plan I will be reducing taxes tremendously from thirty five percent to fifteen percent for companies, small and big businesses."

Danielle Kurtseblen writes, "The conservative Tax Foundation estimates that his plan would reduce federal revenue by $4.4 trillion to $5.9 trillion over the next decade, which is a lot, but down from $10 trillion in his original plan.

Some of that could be offset by economic growth, but even using “dynamic scoring,” the foundation says the plan cuts tax revenue by $2.6 trillion to $3.9 trillion over 10 years. (The higher figure is if the 15 percent business tax rate is applied to “pass-through” entities.) The biggest beneficiaries of Trump’s tax cuts are the wealthy. The top 1 percent of earners see their after-tax income rise by between 10.2 percent and 16 percent. Overall savings would be less than 1 percent.


Trump claimed that he never called climate change a "hoax."

According to NPR, "Actually, Trump has called climate change a "hoax" on several occasions. He said on Meet the Press that he was joking about China's role. As PolitiFact noted: "On Dec. 30, 2015, Trump told the crowd at a rally in Hilton Head, S.C., 'Obama's talking about all of this with the global warming and … a lot of it's a hoax. It's a hoax. I mean, it's a moneymaking industry, OK? It's a hoax, a lot of it.' "

The original source for the “hoax” quote was a tweet Trump sent in 2012. He said the concept of global warming was created by the Chinese to make U.S. manufacturing noncompetitive.


Take a look at the NPR link. Trump is a serial fabricator and a serial bankrupt. His word is not his bond.

No doubt Trump fabricates. Hillary matches him, and lead with the whopper that she did not support the TPP. Thats the big lie.

I dont see it that way. The number of lies is not important, its what you are lying about. Free trade is a extisential disaster IMHO. Lying about that Trumps the birther movement, now global warming thats a similar sized whopper. The truth is that Hillary and the neocons created the world we live in today. Trump needs to make her wear it, and I thought with ISIS he did a make a few flesh wounds. Now if he told the truth about Syria, Ukraine and the USA it would be fatal. Either he would be shot or Hillary would lose all credibilty.

You're right to feel that -- economically -- you've been unfairly treated, Steve. But, from what I can gather, Trump would make things worse, not better.

Owen, you're responding to Steve in precisely the same way most of the US media have responded to Trump and his supporters. You might want to think about that.

Regardless of how Steve sees it, the debate was fairly well fact-checked and it became inescapably obvious that the liar of the evening, of the primaries, of the presidential campaign was, and continues to be, Donald J. Trump.

What Trump says or what he might do if elected doesn't matter. This election has nothing to do with reason; it an emotional roller coaster. As such, the polls can't tell us anything useful because those who vote will make up their minds as they walk into the booth. I won't bet on the outcome.

I won't bet on the outcome either, Toby. But I do marvel at how such a blatant liar has come this far.

I guess the lesson, Mound, is that you can go a long way if you tell people what they want to hear -- regardless of whether it is true or false.

The problem is, Dana, that -- as Trump's Republican opponents discovered -- when you sink to Trump's level, it just becomes a shouting match. The only response to The Big Lie is a big "NO!"

Owen Gray said, "I won't bet on the outcome either, Toby. But I do marvel at how such a blatant liar has come this far."

Trump has come this far only because Clinton represents the establishment. Trumps support is the protest vote. There are American voters who would happily elect Charlie Manson if they could; such is the anger.

Think Brexit: it's the same motive for essentially the same reasons. If you can't influence the leaders by acting within the system then you overthrow it.

There is plenty of reason for anger, Toby. But I should think that being lied to consistently would really make the protesters boil.

Trump is a world class liar, but I feel Hillary is worse because she is a total phoney where Trump assumes we all are in on the con. Both will bring disaster, Hillary will bring Neo Con highway and Trump Chaos. I vote chaos.