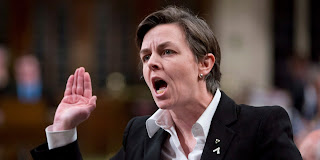 Bob Hepburn warns that those of us who think that Kellie Leitch is on the political fringe, whipping up wing nuts, should think again. Xenophobia is gaining political traction all around the world. After his recent visit to Britain, Hepburn reports that:

In Oxford and Portsmouth, well-educated middle-income people, the type of voters I thought would see the advantages of being closely linked with other European nations, talked to me about why they voted to leave the EU.

Their main reason? Too many immigrants in recent years from the continent, many of whom they felt didn’t want to “be British,” who didn’t respect “British culture” and “British traditions” and who could be potential terrorists.

They also wanted to “send a message” to the political elite in London, who they felt ignored their concerns about immigrants working in jobs that once were filled by old-stock Brits.

The same thing is happening throughout Europe and the United States:

Similar anti-immigrant sentiments are rampant across Europe and are altering the political landscape from Greece to Germany, France and on to the United Kingdom.

The same xenophobia is a driving force behind Donald Trump’s campaign for the U.S. presidency, with his rallies fuelled by crowds roaring their approval whenever he vows to build a towering wall along the Mexican border to stop illegal immigrants.

In Europe, countries such as Turkey, Romania and Bulgaria are fed up with other nations demanding they take in more refugees fleeing the conflict in Syria. Greeks are trying to prevent migrant children from attending schools with their sons and daughters and talk about “a different look” now in Greek schools.

And, in Canada, the same sentiments are just under the surface:

The lone public poll on Leitch’s proposal found 67 per cent of Canadians, including 87 per cent of Tory voters, like the idea of screening newcomers for “anti-Canadian values.” The Forum Research poll for the Toronto Star also found 57 per cent of Liberals and 59 per cent of New Democrats like it.

It doesn't matter that potential immigrants are already heavily screened. What matters is that xenophobia is the handmaiden of political ambition.

Its a question like banning pit bulls. I have traveled the world and lived many cultures. We are all very similar but like dog breds have differant instincts and ways of processing. I think the Northern European culture is the best. If you dont fine, but do not try and destroy what works. I think deeply religious people intolerance is not part of the solution.

We know it's happening. We know it's spreading. What do we propose to do about it? Watching a global train wreck doesn't sound helpful.

I really don't know what to say any more Owen. When I was growing up in the US, I watched the progression of the War in Vietnam and the protests against it and I really thought that though things were difficult we were slowly moving toward a more peaceful and enlightened time. I certainly never imagined that we would one day see a return to the racism and fascism of the 1930s. Unfortunately, I will no longer be surprised at anything, even the return of death camps in Europe or America. I am so glad my father didn't live to see this, it would have destroyed him and brought a sadness to his life that I think would have countervailed his very happy last years. Unfortunately, we have lived to see it, and speaking for myself it has tinged my life with a melancholy that I sometimes feel will never be lifted.

I spent some time as a graduate student in North Carolina in the late 60's and early 70's, Kirby. The shooting in Charlotte reminded me of some of the violence which erupted over school busing there and in Mecklenburg County back then.

As Twain said, history doesn't repeat itself. But sometimes it rhymes.