What You Do To Lose 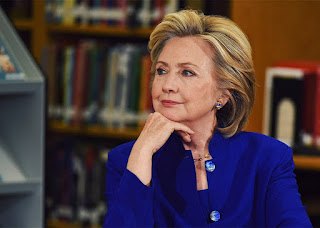 
He is a serial bankrupt who, during his career has left customers and suppliers alike high and dry.

His take-no-prisoners approach to immigration, combined with his remarkable rudeness, has alienated entire voting blocs, including women, Hispanics and Muslims.

Even for a politician, he is singularly untruthful. PolitiFact, a project of the Tampa Bay Times, has rated 35 per cent of his statements as flat-out false and an additional 18 per cent as “pants-on-fire” whoppers.

His platform contains some content. But much is a hodgepodge of braggadocio and bluster.

Yet the polls are getting tighter because Hillary Clinton keeps stumbling -- literally, as she did on Sunday -- and figuratively as well:

Alas for the Democrats, the answer seems to be that Clinton — while perhaps able as an administrator — is a terrible presidential candidate.

Her friends insist she is warm and personable in private. But on television, she comes across as strident and defensive.

She is so wary of the press that it became news around the world last week when she finally allowed reporters onto her campaign plane.

Her platform is more comprehensive and nuanced than Trump’s. But I suspect few American voters would be able to tell you what’s in it.

And like Trump, she is not entirely truthful. According to PolitiFact, she tells fewer whoppers and flat-out falsehoods than Trump. But she makes many more statements that are rated “mostly false.”

Indeed, when the three categories of “mostly false”, “false” and “pants on fire” are added up. Trump and Clinton almost tie. Some 71 per cent of his statements are rated untruthful compared to 69 per cent for Clinton.

It's on the notion of truthfulness that both campaigns are faltering. Hillary's refusal to acknowledge her battle with pneumonia plays into voter doubt more than anything Trump could say about her.

Hillarys medical disclosure has more holes in it than the Warren Commision and 911 Report combined.

Political trust is a very fragile thing and once it is gone, it is very difficult to reclaim. We saw how this had happened with Harper.

Many polls have shown that a majority of independent voters distrust and dislike both, suggesting that only their own respective partisan supporters and sympathizers are still supporting them.

And, interestingly, each side seems very convinced that they have to hold their noses and vote for their own candidate, but only because they are voting for the lesser evil to stop the greater evil. Lol

The same folks, BTW, who then lament that the government they had voted in is often gridlocked and dysfunctional. Lol again.

The fact that Americans have reached this point -- where both candidates are not seen as truthful by a majority of voters -- indicates how badly their system has been damaged, Anon.

It's an object lesson for us.

Keillor knows how to laugh at the silliness of Americans, Dana. Bur perhaps he's onto something when he writes:

She doesn’t do dreaminess. What some people see as a relentless quest for power strikes me as the good habits of a serious Methodist. Be steady. Don’t give up. It’s not about you. Work for the night is coming.

Thanks for the link.