On The Edge Of Insanity 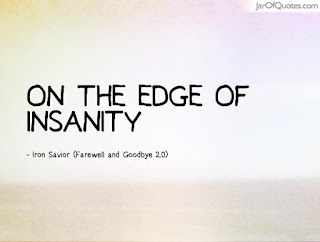 The "American Dream" used to be summed up in two words -- upward mobility. And, after World War II, almost everyone in the United States was upwardly mobile. Ben Fountain writes in The Guardian:

The biggest gains occurred in the post-second world war era of the GI Bill, affordable higher education, strong labor unions, and a progressive tax code. Between the late 1940s and early 1970s, median household income in the US doubled. Income inequality reached historic lows. The average CEO salary was approximately 30 times that of the lowest-paid employee, compared with today’s gold-plated multiple of 370. The top tax bracket ranged in the neighborhood of 70% to 90%. Granted, there were far fewer billionaires in those days. Somehow the nation survived.

Democracy’s premise rests on the notion that the collective wisdom of the majority will prove right more often than it’s wrong. That given sufficient opportunity in the pursuit of happiness, your population will develop its talents, its intellect, its better judgment; that over time its capacity for discernment and self-correction will be enlarged. Life will improve. The form of your union will be more perfect, to borrow a phrase. But if a critical mass of your population is kept in peonage? All its vitality spent in the trenches of day-to-day survival, with scant opportunity to develop the full range of its faculties? Then how much poorer the prospects for your democracy will be.

“America is a dream of greater justice and opportunity for the average man and, if we can not obtain it, all our other achievements amount to nothing.” So wrote Eleanor Roosevelt in her syndicated column of 6 January 1941, an apt lead-in to her husband’s State of the Union address later that day in which he enumerated the four freedoms essential to American democracy, among them “freedom from want”.


the numbed-out, dumbed-down, make-believe world where much of the national consciousness resides, the sum product of our mighty Fantasy Industrial Complex: movies, TV, internet, texts, tweets, ad saturation, celebrity obsession, sports obsession, Amazonian sewers of porn and political bullshit, the entire onslaught of media and messaging that strives to separate us from our brains. September 11, 2001 blasted us out of that dream for about two minutes, but the dream is so elastic, so all-encompassing, that 9/11 was quickly absorbed into the the matrix of FIC. This exceedingly complex event – horribly direct in the result, but a swamp when it comes to explanations – was stripped down and binaried into a reliable fantasy narrative of us against them, good versus evil, Christian against Muslim. The week after 9/11, Susan Sontag was virtually crucified for pointing out that “a few shreds of historical awareness might help us understand how we came to this point”. For this modest proposal, no small number of her fellow Americans wished her dead. But if we’d followed her lead – if we’d done the hard work of digging down to the roots of the whole awful thing – perhaps we wouldn’t still be fighting al-Qaida and its offspring 15 years later.


And, so, the Middle East is worse -- much worse. And the United States is teetering on the edge of insanity.
Posted by Owen Gray at 9:01 am

John LeCarre from 2003: "America has entered one of its periods of historical madness, but this is the worst I can remember: worse than McCarthyism, worse than the Bay of Pigs and in the long term potentially more disastrous than the Vietnam War."

And now it could also be said of much, much longer duration.

Insanity isn't anything new for Americans, Dana. But Trump has taken it to an entirely new level.

Insanity, as the saying (often wrongly attributed to Einstein) goes, is doing the same thing over and over again and expecting a different result.

Yet we hear the justification from some that, for whatever reason, there is no choice but to vote for the lesser evil.

And then expect a different result (i.e., that either candidate will truly work for the good of the electorate and not for the interests of the groups that had been funding/ supporting their candidacies).

Insanity? Lack of critical thinking? Certainly looks that way, no?


It's a powerful, even poignant essay, Owen, but what does it mean for the world and especially for us to the north? What awaits us from being lashed so tightly to this remaining remnant of a once great nation?

As you know I focus heavily on climate change, one aspect of which entails adaptation. What can we expect from a neighbouring people, many of whom, as Fountain notes, don't know what's real anymore? America is going to be very hard hit by climate change, especially along its eastern seaboard and across the south. The American people will have to deal with stresses such as a general retreat from the sea and an internally displaced population migrating northward. That's difficult enough but a negative synergy occurs when the society is riven, so deeply and angrily divided, so deficient in essential cohesion. Factor in inequality, racism and a host of other social ills and it's a recipe for disaster from which we Canadians cannot pretend to be immune.

"We live in two Americas. One America, now the minority, functions in a print-based, literate world. It can cope with complexity and has the intellectual tools to separate illusion from truth. The other America, which constitutes the majority, exists in a non-reality-based belief system. This America, dependent on skillfully manipulated images for information, has severed itself from the literate, print-based culture. It cannot differentiate between lies and truth. It is informed by simplistic, childish narratives and clichés. It is thrown into confusion by ambiguity, nuance and self-reflection. This divide, more than race, class or gender, more than rural or urban, believer or nonbeliever, red state or blue state, has split the country into radically distinct, unbridgeable and antagonistic entities.

"There are over 42 million American adults, 20 percent of whom hold high school diplomas, who cannot read, as well as the 50 million who read at a fourth- or fifth-grade level. Nearly a third of the nation’s population is illiterate or barely literate. And their numbers are growing by an estimated 2 million a year. But even those who are supposedly literate retreat in huge numbers into this image-based existence. A third of high school graduates, along with 42 percent of college graduates, never read a book after they finish school. Eighty percent of the families in the United States last year did not buy a book."

"...Political propaganda now masquerades as ideology. Political campaigns have become an experience. They do not require cognitive or self-critical skills. They are designed to ignite pseudo-religious feelings of euphoria, empowerment and collective salvation. Campaigns that succeed are carefully constructed psychological instruments that manipulate fickle public moods, emotions and impulses, many of which are subliminal. They create a public ecstasy that annuls individuality and fosters a state of mindlessness. They thrust us into an eternal present. They cater to a nation that now lives in a state of permanent amnesia. It is style and story, not content or history or reality, which inform our politics and our lives. We prefer happy illusions. And it works because so much of the American electorate, including those who should know better, blindly cast ballots for slogans, smiles, the cheerful family tableaux, narratives and the perceived sincerity and the attractiveness of candidates. We confuse how we feel with knowledge."

"Political leaders in our post-literate society no longer need to be competent, sincere or honest. They only need to appear to have these qualities. Most of all they need a story, a narrative. The reality of the narrative is irrelevant. It can be completely at odds with the facts. The consistency and emotional appeal of the story are paramount."

"The core values of our open society, the ability to think for oneself, to draw independent conclusions, to express dissent when judgment and common sense indicate something is wrong, to be self-critical, to challenge authority, to understand historical facts, to separate truth from lies, to advocate for change and to acknowledge that there are other views, different ways of being, that are morally and socially acceptable, are dying. Obama used hundreds of millions of dollars in campaign funds to appeal to and manipulate this illiteracy and irrationalism to his advantage, but these forces will prove to be his most deadly nemesis once they collide with the awful reality that awaits us."

Regarding the problem of widespread poverty, Owen, at the risk of sounding a tad simplistic or perhaps even 'binary,' my opinion is that there is little prospect of remediation given that the legislative agenda of western democracies are essentially set these days our corporate overlords.

Regarding the absence of critical thinking, all I can say is that as teachers, I'm sure we both did our best during our time in the classroom to cultivate thinking skills. The rest is up to the individual.

I taught grade 13 English with a good friend several years ago, Lorne. The whole course was built around 1984 and Politics and the English Language. These days, we both shake our heads and despair.

Hedges has given us insight into the hollow existence of the majority of Americans, Mound. It's more than tragic. It's frightening.

It usually takes about ten years before what happens in the United States drifts our way, Mound. We have a bit more time. But I'm not convinced we're any wiser.

This is not a year when the choices are stellar, Anon.

I differ with Hedges that the images are "skillfully manipulated." Sometimes that is true but we have reached a stage that people swallow any sort of tripe no matter how shallow.

We, as a society, have yet to come fully to terms with the effects of television. Already we are into the digital age and ignorance is exploding everywhere. McLuhan was right, the medium is the message, or at least a large part of it.

Where to start? We recently joined a group of about 200 people on a tour in Russia. Most of these folks were American and it was interesting to hear them talk about their upcoming election. We tend (as Canadians) to keep our opinions to ourselves, especially when we spend time in the US during the winter, so our response was usually along the lines of "we understand your choices are getting more difficult, it seems", and that we've just come through a rather interesting election ourselves.

Without a doubt, most felt they are currently in a position of voting for whose the least of the worst! One fellow, a retired doctor, told us he had seen Justin Trudeau interviewed on 60 Minutes and he wondered afterward, why can't we find anyone like that in the US?

I watched Barack Obama's speech to the UN and it was hard not to be impressed by what he had to say. It's as if he was speaking to what he thought he was elected to do when he achieved the Presidency, however, was thwarted every way possible by the Tea Party Republicans as well as his own party who were more worried about getting re-elected in their own constituency rather than what was good for their country's citizens.

We truly have moved from democracies to governments of the corporations and oligarchs in both countries.

I believe Trudeau was put over the top by millennials, Lulymay. They have supported Sanders -- not Clinton or Trump. They will make the difference this time. If they vote for Clinton, she'll win. But, if they stay home, I fear that Trump will win.

What McLuhan said in the 60's still applies, Toby. Unfortunately, television does not encourage critical thinking. It has spawned Jerry Springer and his wannabes.