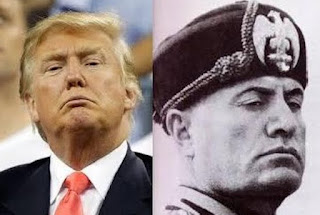 It's true that there are differences between the European fascists of the 1930's and the fascism Donald Trump is currently selling. Douglas Kellner writes:

Unlike classic dictators who are highly disciplined with a fixed ideology and party apparatus, Trump is chaotic and undisciplined, viciously attacking whoever dares criticize him in his daily Twitter feed or speeches, thus dominating the daily news cycles with his outrageous attacks on Mexicans, Muslims and immigrants, or politicians of both parties who dare to criticize him.


However, Trump's followers are very much like those who supported Hitler, Mussolini and Franco:

Like followers of European fascism, Trump's authoritarian populist supporters are driven by rage: they are really angry at the political establishment and system, the media, economic elites and other elites. They are eager to support an anti-establishment candidate who claims to be an outsider (which is only partly true as Trump has been a member of the capitalist real estate industry for decades, following his father and has other businesses as well, many of which have failed). Trump provokes their rage with classic authoritarian propaganda techniques like the "big lie," when he repeats over and over that immigrants are pouring across the border and committing crime, that all his primary opponents, the media and Hillary Clinton are "big liars," and that he, Donald Trump is the only one telling the truth -- clearly the biggest lie of all.

It is Trump's use of the big lie which links him to the authoritarian leaders of the thirties:

Trump thus presents himself as a superhero who will magically restore the US to greatness, provide jobs and create incredible wealth, and restore the US to its rightful place as the world's superpower. In this fairy tale, the billionaire king will fight and destroy all the nation's domestic and foreign enemies and the superman will triumph and provide a happy ending for people in the US.

While Trump plays the role of the Ubermensch (superman or higher man) celebrated by the Nazis and embodies their Fuhrerprinzip  (leadership principle), Trump is a very American form of the superhero and lacks the party apparatus, advanced military forces and disciplined cadres that the Nazis used to seize and hold power. Like other right wing American populists, Trump bashes the Federal Reserve, the US monetary system, Wall Street hedge fund billionaires and neoliberal globalization, in the same fashion as Hitler who attacked German monopoly capitalism. But even as he ranted against monopoly capitalists, Hitler accepted big donations from German industrialists -- a fact brilliantly illustrated in the famous graphic by John Heartfield ," The meaning of the Hitler salute," which showed Hitler with his hand up in the Nazi salute to receive money from German capitalists. Just as Hitler denounced allegedly corrupt and weak party politicians in the Weimar Republic, Trump decries all politicians as "idiots," "stupid," or "weak" -- some of the would-be strongman's favorite words. In fact, Trump even attacks lobbyists and claims he alone is above being corrupted by money, since he is self-financing his own campaign (which is not really true but seems to impress his followers).

This is a rewrite of an old movie. But it has the same ending.

Another differance is that people do not believe in magic anymore. I doubt more than 20% of Trump voters expect he will fix things. What they hope for is he will change the status quo and in that there is a chance life will get better, or be "like it used to be"

That's what he's selling, Steve. But the answer isn't in the past -- like it used to be.

I think the most important difference here is the simple fact that European fascism was distinctly nationalist, and though Trump uses a nationalist narrative, his business practices demonstrate very conclusively that he has no real interest in nationalism at all. He has long supported the globalizing, neo-liberal agenda and there is no reason to believe that he would actually take up any of the anti-free trade pro-American business stances he has voiced so far in this election process.

Steve, I think a number of people do believe in magic. So far, every time Trump makes one of his ridiculous proclamations, such a promising to create a wealth of jobs, and is asked how he will do it, his usual response is "Just watch me." An equivalent of the prestidigitator's "abra cadabra," no?

Given that his positions on issues changes almost daily, Kirby, it's hard to believe anything he says.