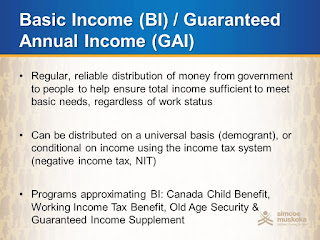 It's noteworthy that Andrew Coyne has come out in support of an Annual Basic Income Program. He admits that present studies are highly speculative. Nonetheless,

the results, speculative as they are, are intriguing. The PBO puts the cost of a nationwide rollout of the Ontario program, guaranteeing every adult of working age a minimum of $16,989 annually ($24,027 for couples), less 50 per cent of earned income — there’d also be a supplement of up to $6,000 for those with a disability — at $76.0 billion.


What would it cost? That, too is highly speculative:

The PBO estimates the cost of current federal support programs for people on low-income (not counting children and the elderly, who already have their own guaranteed income programs) at $33 billion annually. Assuming a federal basic income replaced these leaves a net cost of $43 billion. That’s still a lot — one seventh of current federal spending.


However, there would be savings in other areas:

But suppose we stick with the Ontario model. If implemented, it would replace Ontario Works (social assistance) and the Ontario Disability Support Program. The total savings: about $8 billion. Supposing equivalent savings were achieved in the other provinces — and federal transfers reduced accordingly — that would knock about $20 billion off the national pricetag.


These savings are based on the premise that the provinces would buy into the scheme. And, given provincial turf wars -- currently on display in the Kinder-Morgan standoff -- it's hard to imagine some kind of national unanimity. However, medicare faced the same hurdles.

Something tells me that if Doug Ford becomes the next premier, Ontario's basic income pilot is dead. But it is interesting to see that Conservatives like Hugh Segal and Andrew Coyne have come out in support of a National Basic Income.

Each man, however, is not currently revered in Conservative circles.

Image: SlidePlayer
Posted by Owen Gray at 9:12 am

Email ThisBlogThis!Share to TwitterShare to FacebookShare to Pinterest
Labels: Conservatives For Basic Income

I recall reading that Ford has already said he will nix that program. Not going to pay people NOT to work. Marc

That's the usual argument, Marc. On the other side of the argument, a gauranteed income could replace already existing income programs and it would be easy to administer.

I know the Dauphin study in the 1970's showed great improvements in both educational and health outcomes, Owen. Those surely need to be factored into the equation.

I agree, Lorne. The old adage of "pay me now or pay me later" seems to apply. And, when we pay later, it always costs more.


James Galbraith explores guaranteed minimum income in the context of robotics and automation. He sees it as rooted in wealth redistribution in the guise of taxation of those who use automated means of production. You hire someone you pay $X tax. You automate that work, you're taxed at $X-plus.

As he explains this is in the interests of both sides given that we exist in a consumer economy and want to avoid large scale social unrest. Your robot can make no end of goods but your robot cannot provide a market for your production. Automation, unchecked, destroys the essential market. Hence the economic advantage of automation must be partly redistributed to maintain the market.

In Canada we address the issue of guaranteed income without the more controversial but integral component - redistribution.

There is a simple economic axiom which classical economics ignores, Mound. Economies work better when wealth is shared. Zero sum games are self destuctive.