We Don't Need No Education 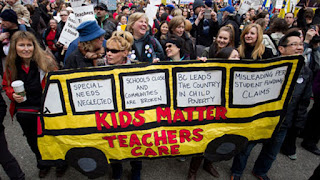 That's the title of Paul Krugman's column in this morning's New York Times. This spring, in several states, teachers strikes are springing up like dandelions. Krugman explains what's been happening:

So what happens when hard-line conservatives take over a state, as they did in much of the country after the 2010 Tea Party wave? They almost invariably push through big tax cuts. Usually these tax cuts are sold with the promise that lower taxes will provide a huge boost to the state economy.

This promise is, however, never — and I mean never — fulfilled; the right’s continuing belief in the magical payoff from tax cuts represents the triumph of ideology over overwhelming negative evidence.

For a great majority of states are required by law to balance their budgets. This means that when tax receipts plunge, the conservatives running many states can’t do what Trump and his allies in Congress are doing at the federal level — simply let the budget deficit balloon. Instead, they have to cut spending.

How, after all, can governments save money on education? They can reduce the number of teachers, but that means larger class sizes, which will outrage parents. They can and have cut programs for students with special needs, but cruelty aside, that can only save a bit of money at the margin. The same is true of cost-saving measures like neglecting school maintenance and scrimping on school supplies to the point that many teachers end up supplementing inadequate school budgets out of their own pockets.

At the national level, earnings of public-school teachers have fallen behind inflation since the mid-1990s, and have fallen even more behind the earnings of comparable workers. At this point, teachers earn 23 percent less than other college graduates. But this national average is a bit deceptive: Teacher pay is actually up in some big states like New York and California, but it’s way down in a number of right-leaning states.


Ontario, during the Mike Harris years, lived through the same phenomena. My family and I lived through two strikes. Harris was himself a failed teacher and his Minister of Education was a high school drop out. I suspect that, if Doug Ford is elected premier, history will repeat itself. Mr. Ford and his brother Rob are and were not noted for their stellar educations.

I have an obvious bias on this issue. But it seems clear -- at least to me -- that when the uneducated attain power, education is not a priority.

Here's what DoFo's bio said when he was running for Toronto mayor: "Doug Jr. grew up in the Toronto suburb of Etobicoke and attended high school at Scarlett Heights Collegiate Institute." Note that it doesn't say he graduated. His bio on the PC website doesn't mention education at all.

We don't need no education, indeed.

Thanks for the link, Cap. Ford's comment that he wouldn't know Margaret Atwood if she walked by him says a great deal.

Rob was known as the smart one. He at least spent a year warming the bench for the Carlton Ravens football team.

I was aware that Rob spent a year at Carleton and then dropped out, Cap. I wonder how far Doug went. I'd like to know.


There are some industries that need a highly educated workforce, aerospace for example, but for many it's enough if the machinery is intelligent. The drone labour can be easily trained to push a button when it glows green. We can even do that with monkeys.

Boeing tried to split its manufacturing between Everett, Washington and a new operation in Macon, Georgia. It seems some international customers told Boeing they would order their jets but only those made in Everett, Washington. The Georgia plant closed in 2016.

Car plants, however, thrive in Dixie. Chuck Thompson, in his book,"Better Off Without'Em," discusses how workers from the south are more complacent, willing to accept what their employer offers, less likely to strike. Volkswagen ran afoul of the authorities in, I believe, Tennessee when it encouraged the workers to form unions.

What better way to engineer a neo-feudal order than to restrict access to education to kids from families that can afford it.

I was a young man (@20) when I lived in London. A couple of the lads we partied with were employed at some sort of apprenticeship/internship with major banks. I think they were in a 3-year arrangement. Their affluent parents were picking up all their expenses - housing, food, clothes, etc. The idea was that kids from less affluent families simply could not afford to work for nothing in London for three years. In this way the banks ensured they only had the new management types they wanted and kept out the riff-raff. Apparently after their term in cleansing penury was over these guys knew they would step right into well paid positions.

For generations, immigrants to this country knew that a good education was a way up and out, Mound. That was certainly true in my wife's family. My father's family had no money for a university education for any of the six children. Luckily, my father was a World War II vet. He never expected to go beyond high school. But he became a mechanical engineer, with the government footing the bill.

I am currently reading a book called The Death of Expertise, Owen, in which the author posits that we live in times where many people feel that their opinion is at least equal to, and sometimes superior to, the views of experts. With the ascendancy of Doug Ford, I suspect Ontarian are soon to be reminded of the far-reaching consequences of the kind of 'expertise Ford espouses.

I am mystified daily, Lorne, how genuine ignorance is espoused without embarrassment. Obviously, we don't know what we don't know.

Owen, did you see this? "The Internet Apologizes …"

Thanks for the link, Toby. I was struck by this passage:

"What we’re left with are increasingly divided populations of resentful users, now joined in their collective outrage by Silicon Valley visionaries no longer in control of the platforms they built. The unregulated, quasi-autonomous, imperial scale of the big tech companies multiplies any rational fears about them — and also makes it harder to figure out an effective remedy."

We're like Dr. Frankenstein, horrified by the creature we've created.

During my time in Vancouver HiTech, we valued educated workers, even in positions that did not require much of an education to function.

The reason we valued education, to the point of broadly funding it for all our employee's, was because it allowed our employee's to innovate, invent, adapt and have tasks delegated to them with minimal supervision. It also allowed us to create a "work culture" and promote from with in.

When I was sent to our subsidiary in Milwaukee, to fix major issues that rendered it unprofitable and unreliable, the work culture was the biggest obstacle I had to over come. Managers micromanaged, Engineers lived in a world of their own, and most of the employee's, were drones.

Empowering employee's, getting them to take advantage of the educational opportunities, were key parts of turning that Division around.

On the otherhand, there has been a great increase in "Educational Inflation", with out a matching increase in knowledge or wisdom. With many "professional" certification programs, to maintain your cert, you have to take a new course every year, which is all too often, a subset of chunks of earlier courses repackaged under a new title. This provides an annual supply of income to the Certifying Organization, beyond membership fees.

When education becomes paint by the numbers, Jay, creativity and self management go out the window. You're right. Truly educated workers can solve problems and think for themselves. For truly educated people, the world keeps getting bigger.