Not Believed, Not Trusted 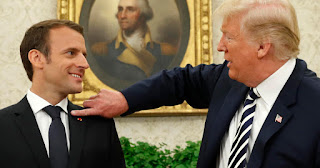 Donald Trump has a cluttered and chaotic brain. Nowhere is the chaos more evident than on the question of nuclear weapons in North Korea and Iran. On the one hand, Trump wants to do a deal with Kin Jung Un. On the other, he wants to tear up the agreement with Iran. Jonathan Manthorpe writes:

Trump foresees — fantasises might be more accurate — that when he meets Kim in May or June “we have a chance of doing something very special with respect to North Korea. Good for them, good for us, good for everybody.” Trump was blue-skying about Kim after a meeting with Emmanuel Macron. The French President had travelled to Washington on behalf of much of Europe to try to deter Trump from junking the 2015 multi-national agreement by which Iran agreed to end its nuclear development program.


However, on Iran "Trump re-iterated on Tuesday that he considers the deal 'insane' and 'ridiculous,' and that 'it should never have been made.'"

His quarrel with the deal is not clear. He has never moved from bluster to detail. This leaves the inference that the problem is that the agreement was made by President Barack Obama, and a central mission of the Trump regime is to destroy all vestiges of the Obama administration.


In fact, when you look at everything Trump has tried to accomplish -- ending healthcare, deporting DACA recipients -- the motive seems pretty clear. Like the reports of the "golden showers," Trump wants to get rid of any vestiges of Obama -- including the bed he slept in when he visited Moscow.

But anyone who deals with Trump -- including Emmanuel Macron -- understands that Trump is a nutjob. In Washington this week, Macron laboured hard to save the Iran Deal and the Paris Climate Accord. Trump gave him no assurances.

Surely, Macron must know that Trump can't be trusted -- because he can't be believed.

Email ThisBlogThis!Share to TwitterShare to FacebookShare to Pinterest
Labels: Trump The Dealmaker

Putin and Xi have said they have no intention of reopening the Iran deal. Trump seems a little slow on the uptake here. Maybe Putin needs to wave that tape around a bit to focus Comrade Trumpov's attention.

Mr. Trump appears to live in his own world, Cap. Donald is delusional.


Trump seems bereft of logic and incapable of critical thinking. He wants to tear up the Iran deal, against the wishes of America's partners including Russia and China, and yet he thinks he can get an agreement of even greater scope from North Korea. He is the president but he knows nothing of leadership, diplomacy or statesmanship. Not only does Trump lack the skillset essential to his job but his total dishonesty and his narcissism make him profoundly dangerous.

If ever there was a man who was totally unqualified and unsuited for the job, Mound, it is Donald Trump. Yet there he sits.

Thanks for the link, !? The aging gorilla. Seems quite appropriate.