Some People Haven't Done Their Homework 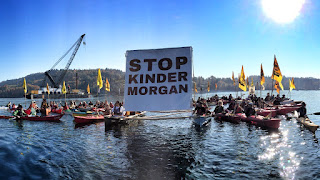 If Justin Trudeau is to be believed, the Canadian government is going to take an equity stake in Kinder Morgan's Trans Mountain Pipeline. Andrew Nikiforuk suggests that we should take a good look at Kinder-Morgan's history and balance sheet before making any such investment:

Kinder Morgan, which runs what founder and Texas billionaire Richard Kinder calls an “unsexy, dirty business,” started off as an offshoot of the U.S. corporate giant Enron in 1996. That’s when a pair of senior Enron executives, Richard Kinder and Bill Morgan, joined up to purchase a couple of pipelines from Enron. Kinder and Morgan parlayed that investment into a North American pipeline empire while Enron collapsed in a spectacular fraud scandal in 2001.

To this day Kinder rarely speaks about the Enron scandal even though Kinder Morgan’s senior management team includes many prominent Enron executives, including Jordan Mintz and Steve Kean.


Kinder-Morgan's balance sheet looks about as healthy as Enron's:

The company has been in the financial doldrums for years due to poor earnings (the smallest dividend yields in the industry) and high debt.

Due to high debt levels ($37 billion, or nearly a third of the value of the company) and low oil prices, the company has lost half of its stock value since 2015. Analysts credit the company’s poor stock performance to “poor business execution and way too much debt.”


On top of that, the company's legal and environmental record is appalling:

Kinder Morgan has a long and detailed record of violating both environmental and financial laws resulting in penalties of $162 million since 2000 in the United States. Key offences include environmental violations ($119 million) such as pipeline spills and explosions, energy market manipulation ($20 million fine), pipeline safety violations and repeated labour violations. In 2011 the U.S. Department of Labor sued Kinder Morgan for underpaying nearly 4,600 workers for overtime for at least two years. The company resolved the lawsuit by paying out $830,000 in back wages.


And we're thinking of investing billions in this white elephant? Some people haven't done their homework.

Image: Last Real Indians
Posted by Owen Gray at 9:06 am

At a time when governments should be weaning oil companies off their subsidies Trudeau and Nautley want to throw money at KM. That's just flushing it down a rat hole.

It seems pretty obvious that Trudeau doesn't represent the people who elected him.

The oil barons know whose buttons need to be pushed, Toby.

politicians know what gets them votes. if the current crop in office, don't do it, they could well be defeated at the polls in the next election and the other parties will do what K.M. wants. '

In my opinion, politicians who are opposed to the pipeline, need to be clear about the financial situation of K.M. of course the MSM might not want to publish that sort of information, given their "association" with other hedgefunds, investors, etc.

In B.C. we've heard Andrew Weaver, leader of the Green Party is opposed to the pipeline, but we haven't heard him and his get out there on the talk circuit and explain some of the "finer" points as you have in this post.

The only place I've read about the Enron connection and the debt is on blogs. Thank you for providing this information. Now if readers send this on to their family and friends perhaps the message will get out.

To be polite, the economic facts are overplayed. Actual numbers are never reported, only projections, projections that are made by companies like Kinder Morgan (https://thetyee.ca/Opinion/2018/03/21/Trudeau-Notley-Trans-Mountain/) No-one mentions the available statistics.

Stephen Harper did his best to cripple StatsCan, but looking at the available pre-crash numbers, tar-rock (aka oil-sands) production contributed about 2% to Canada’s GDP (conventional oil and gas were another 4%) Because even the most strident backers know how little real economic activity is actually generated, they turn to the holy-grail/shiny-squirrel of modern economics - investment.

It is possible that “investors” (people who play the markets, generally the same people who own the news papers and broadcasters) might make some money trading/hedging on “options”, “derivatives”, “tranches”, etc, but that money has no real effect on jobs, or the economy, as it is stored off-shore; the inevitable result of “bringing in investment” is “sending out profits”.

If you look at real world economic outcomes that affect Canadians and actual existing numbers from past statistics, where tar-rock extraction is concerned, Canada’s economy might hope to gain numbers that are effectively on the edge of statistical error. There are far better places for people and governments to be focusing economic efforts than on dilbit pipelines.

Trudeau's fiscal nonsense may be well-received in large parts of Alberta, Owen, where they regard the award the U of A is giving to David Suzuki as a massive betrayal of the public's trust: https://www.theglobeandmail.com/canada/alberta/article-debate-sparked-over-university-of-alberta-tribute-to-david-suzuki/

You're right, k. We could make much wiser investments than putting money into Kinder-Morgan. But, on this issue, wisdom seems to be in short supply.

I took note of that article, Lorne. In Alberta, Suzuki seems to be Public Enemy No.1.

From an economic and from a planetary perspective, this is all about making a quick buck, Mound -- and then getting out of town before the stuff hits the fan.

.. I have yet to hear back from a single politician
of how export of Alberta Dilbit
equals 'Energy Security For Canadians'
and thus In 'The National Interest'

I keep thinking storks or.. kindly angels
must be involved.. or a miracle from the lord above
or Donald Trump.. it just gets great again
or the house gets warm again
and the gas tank fills again

Then I remind myself
that horseshit salad minus the lettuce
is just pure unrefined horseshit..
(full disclosure, I a farm boy growed up

So we will ship dilbit to Washington State
who will refine and sell it back to us?
Is that the energy security?
I must be missing part of the equation..
Does the security fall from the sky?
A heavenly rain.. so to speak..
who had a wicked ass horse.. named Shamus)

For almost fifty years we haave been fed the lie that self interest is in the public interest, Sal. What's amazing is that we've bought the lie for so long.