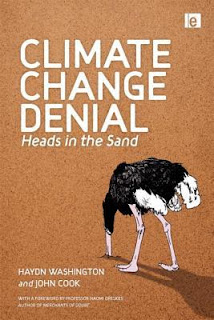 Elizabeth Shogren reports that a recently released report from The National Park Service in the United States has been edited to omit all references to human impacts on climate change:

National Park Service officials have deleted every mention of humans’ role in causing climate change in drafts of a long-awaited report on sea level rise and storm surge, contradicting Interior Secretary Ryan Zinke’s vow to Congress that his department is not censoring science.

The research for the first time projects the risks from rising seas and flooding at 118 coastal national park sites, including the National Mall, the original Jamestown settlement, and the Wright Brothers National Memorial. Originally drafted in the summer of 2016 yet still not released to the public, the National Park Service report is intended to inform officials and the public about how to protect park resources and visitors from climate change.

The 87-page report, which was written by a University of Colorado Boulder scientist, has been held up for at least 10 months.

The delay has prevented park managers from having access to the best data in situations such as reacting to hurricane forecasts, safeguarding artifacts from floodwaters or deciding where to locate new buildings.


The scientific community is outraged:

Critics say the National Park Service’s editing of the report reflects unprecedented political interference in government science at the Interior Department, which oversees the park service.

Jonathan Overpeck, a climate scientist and dean of the University of Michigan’s School for Environment and Sustainability, said the deletions are “shocking from a scientific point of view, but also from a policy point of view.”

“To remove a very critical part of the scientific understanding is nothing short of political censorship and has no place in science,” he said. “Censorship of this kind is something you’d see in Russia or some totalitarian regime. It has no place in America.”


Currently, Americans are in high dudgeon about Russian disinformation on Facebook. But consider the drivel produced by their own government agencies. It's perfectly Orwellian.

And thereby hangs a tale.

We've been there, done that, got the t-shirt. Next they'll destroy the historical data kept in libraries.

Yes, we've seen this movie before, Cap. What's surprising is that so many of us will vote for people who are dedicated to keeping us in the dark. Are we quite prepared to be treated like mushrooms?

I always think of something I read that a Russian woman once said, Owen: "Better a bitter truth than a sweet lie." Judging by the popular support given to the enablers of ignorance, many people, including countless Americans and Canadians, disagree.

There's comfort in a lie, Lorne, until a storm -- and there's always a storm -- washes it away.


Piece by piece, the fundamentals of liberal democracy are being dismantled.

It's beginning to look like Orwell's future is our own, Mound.

.. there is probably a Pulitzer Prize floating there.. for the intrepid journalist who is able to map or track how that process unfolded. Probably a chain of emails & memos.. and there will be a disgruntled mid level bureacrat horrified by the attack on reason.. who offloaded copies to a thumbdrive

This stuff fascinates me.. the forensics and the whistleblower

Looked at another way.. these criminal political thugs aint so smart.. they always leave tracks.. there is always a 'chain of command'. But we don't reward fine journalism anymore. They get sued. Or they signed non-disclosure agreements prior to actually getting hired. In Canada we can thank the thug sellouts like Paul Godfrey for this muting in mainstream media.. and suppression of actual investigative journalism

And a case history is Christy Clark & the Ken Boessenkool Affair. Nothing ever appeared in writing, the government failed and suppressed and Ken went back to Calgary after accompanying her to China.. 'to spend more time with his family'. He fondled a waitress after too much booze at a political golf tournament. He had been farmed out by the Harper Reformer gang to be her 'Liberal' staff management advisor. Media came up empty with FOI requests. The response was delayed and delayed.. and then told all investigation was conducted 'verbally'.. Really ? Post it notes ?

Paul Godfrey certainly didn't want this bizarre coverup 'covered' .. not by his rags. He was busy arranging glowing op-eds by the likes of Joe Oliver and Stockwell Day.. or Lord Black of flackamoore

We need to explore & develop ways to fund more investigate journos like Nikiforuk or Damien Gillis.. or Indy's who are accomplished... Mound for example. Political writer Juan Cole accepts donations but he also has tenure at University of Michigan if I am not mistaken. Andrew Derocher re polar bear and sea ice has stature via University of Alberta and grants.. All have taken to Twitter to expand readership or promote their writing

We need to form alliances, and invade the world of Mainstream Media. The schmucks like pseudo intellectual Ken Boessenkool who keeps surfacing (he signed the Alberta Firewall paper with Tom Flanagan and Stephen Harper) recently re-appeared to assist Patrick Brown.. or Alykhan Velshi who keeps being given plum jobs or floating into Andrew Scheer's campaign or Denise Batters who was gifted by Harper as a Senator are propped up by rotted cronyism.. an endless supply of ludicrous funding and job titles. Jenni Byrne is already cashing in.. and then being part of tv panels.. Really ?

We need to become renovators of democracy, pest exterminators. We need the money they are getting.. and they do not deserve it anyway. Batters of course in the news for meeting with Jeff Sessions re marijuana control.. What ? When did that become part of her job description as a Canadian Senator ? Order of Canada next for this dim partisan slug ?

Whilst Orwell coined the phrases Newspeak, Thought Police, Big Brother, Double Think and several other similar words many years ago it would seem that his words were indeed a presentiment of the future now upon us Owen.

These days, the hammer is always poised above the head of investigative journalists, sal. They need editors like Ben Bradlee -- who backed Woodward and Berstein. Real journalism takes extraordinary courage.