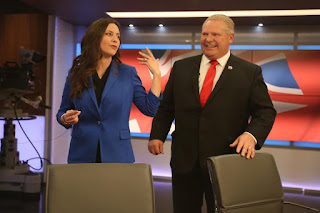 Lord knows, and Ford knows, the camp of Granic Allen — an anti-gay, anti-abortion, anti-Muslim, burka-baiting candidate — put him over the top in last month’s leadership vote. No Tanya, no Tory leadership triumph.

When Tanya speaks, Doug listens — as he did during the party’s leadership debates by enthusiastically endorsing her demands to “repeal” the sex-ed curriculum (and embracing her vows to rip out all wind turbines in the province).

When the kingmaker demands a seat at the table, the king makes way — allowing her to seek the party nomination in Mississauga Centre, then sending warm good wishes after her victory last weekend. Far from barring her as an outlier, Ford blessed his comrade in arms and partner in populism.


Who is Granic Allen?

She told Sun News in 2013, a decade after Ontario legalized same-sex marriage, that it was the “demise of society.” And yet society has survived.

She speaks of an “abortion holocaust,” comparing the founder of Planned Parenthood to the fomenter of the Holocaust, Adolf Hitler, according to the National Post.

In 2014, she retweeted an image of mayoral candidate Olivia Chow caricatured as the founder of Communist China, Mao Zedong, with a caption referring to socialist “parasites.”

In a 2013 blog, she mused, “The niqab and burka … are masks which cover the face. I don’t believe people should dress like ninjas … bank robbers.”


They both deal in vulgarities:

To be clear, Ford hasn’t publicly uttered all the words spoken by Granic Allen, notwithstanding his record of vulgarisms when denigrating people who annoyed or challenged him (calling a female reporter a “little bitch,” or complaining a home for autistic teens had “ruined” the community). The so-called straight shooter has played a double game of first embracing Granic Allen, and only later distancing himself — but never denouncing her hateful words.


Ford says she's going to bring change to Ontario. It's pretty clear -- to anyone who is only half concious -- what kind of change that will be.

Cynically, Owen, I have to ask: How many even half-conscious are there amongst today's electorate?


They're working from an old playbook formulated in Europe in the 30s. It has worked in Poland, Hungary, Turkey, even the United States and is challenging liberal democracy in France, Britain, the Netherlands and elsewhere. Fear and bigotry, properly inculcated in a population, can be wickedly powerful. To those not susceptible to their tactics it can be stomach-churning to observe yet we don't seem to know how to fight back and so give them too much of a free ride. It certainly doesn't help that your Ms. Wynne has created so much cause for disaffection. She has given Ford something of an open door to push on.

I've had a couple of conversations lately with peeople who claim that change is long overdue, Lorne. But I'm not at all sure that the people who clamour for change know what kind of change Ford will give them.

Quite true, Mound. None of the choices are stellar. But Ford's premiership would be a disaster.