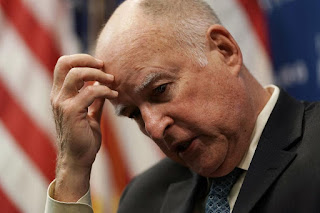 California Governor Jerry Brown visited Ontario this week. He's worried that the province will back track on its promise to fight climate change. Tom Walkom writes:

The governor has harnessed his power as a populist-environmentalist to lead the crusade against global warming — by pushing back against the climate-denier-in-chief in the White House. But he fears Donald Trump’s thinking is contaminating Ontario, just as the poison of carbon infects the province.

“It would be a tragedy if Ontario attempts to go backward,” Brown warns in an interview.

There is an obligation to “reduce carbon poison in the economy of Canada and the economy of the world — we’re all in it together,” he tells me, after inviting me to hop in his car for the ride to the legislature where he will meet Lt.-Gov. Elizabeth Dowdeswell (herself an expert on global warming).


That was the message he wanted to deliver to the Ontario Legislature. But he didn't get the chance:

In an unprecedented move, the opposition Progressive Conservatives refused to let Brown address the legislature.

Given that California boasts the world’s sixth largest economy and is a major trading partner at a time of NAFTA upheaval, the snub came as a surprise. Instead of addressing MPPs from all parties, Brown encountered a province poised to vote in a new premier, Doug Ford, who vows to dismantle Ontario’s cap and trade alliance with California and who has suspended his own Progressive Conservative Party’s recent promise of a carbon tax.


Brown knows something about populist politics -- both the good and the bad. Forty years ago he ran for president. He's now in his fourth term as governor of California. In California, they've reached a consensus on climate change:

He wants to get the message out that California is leading the charge against Trump, and that Canadians have joined hands with his state in a linked, market-based cap and trade program to lower greenhouse gas emissions at the lowest possible cost to the private sector. It was a Republican idea, embraced by his predecessor, Arnold Schwarzenegger, as the best way to achieve their bipartisan environmental goals.


Brown understands the existential threat. "“This isn’t for me,” the aging governor likes to say. “I’m going to be dead. It’s for you.”

Doug Ford will tell you that what he's doing, he's doing for you. Don't believe it.

Image: The Toronto Star
Posted by Owen Gray at 8:57 am

And yet despite the overwhelming evidence of climate change's rapid escalation, far too many are happy to listen to Doug Ford's promise to end the war on carbon, Owen. Some days it is hard to retain a measure of hope.

Self destruction is the price of stupidity, Lorne.