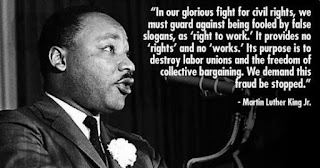 We just marked the 50th anniversary of Martin Luther King's assassination. We remember him as a crusader for racial justice. But, Michael K. Honey writes, we have forgotten that he was very much a crusader for economic justice:

One major failing in how we remember King “is our typing of him as a civil rights leader,” the activist and pastor James Lawson says. “We do not type him as a pastor, prophet, theologian, scholar, preacher … and that allows conventional minds across the country to thereby stereotype him and eliminate him from an overall analysis of our society.”

King early on described himself as a “profound advocate of the social gospel” who decried a capitalist system that put profits and property rights ahead of basic human rights. Beyond his dream of civil and voting rights lay a demand that every person have adequate food, education, housing, a decent job and income.

Ultimately, his was a more revolutionary quest for a nonviolent society beyond racism, poverty and war.


We tend to forget that when King was killed in Memphis, he was marching with striking garbage workers:

There is no intrinsic difference” between workers, King told the American Federation of Labor and Congress of Industrial Organizations (AFL-CIO), one of America’s most important trade unions, in 1963. Skin color and ethnicity should not divide those who work for a living, he said.

“Economic justice,” King went on, required “a land where men will not take necessities to give luxuries to the few,” and “where all our gifts and resources are held not for ourselves alone but as instruments of service for the rest of humanity.”

This agenda was not only about civil rights. The 28 August demonstration that culminated in King’s I Have a Dream speech was publicized as the March on Washington for Jobs and Freedom. It was the result of many years of organizing by black workers and their unions.


It's a safe bet that King would have been apoplectic about the Neo-liberal revolution. He would see it as a movement which sought to reinstate a new kind of slavery. The chains had been taken away. But workers were still slaves to their masters.

We still have a long way to go.

Image: Teamsters For A Democratic Union

King was a powerful voice for the downtrodden and disenfranchised, Owen, although I have read that he regretted not placing greater stress on the need for economic justice earlier in his life.

I've read that too, Lorne. But I've also read that, for him, racial and economic justice were inextricably linked.