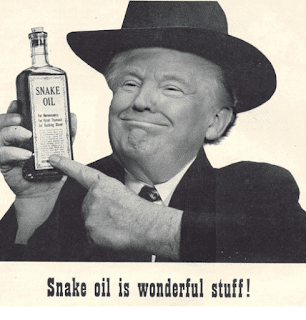 Paul Krugman writes that, in the United States, snake oil isn't selling like it used to. Exhibit A is Donald Trump's tax cuts. George Bush touted the same snake oil and Americans bought it:

In the past, deficit hypocrisy was an important weapon in the G.O.P. political arsenal. Both parties talked about fiscal responsibility, but only Democrats practiced it, actually paying for policy initiatives like Obamacare. Yet Democrats were punished for doing the right thing — remember “they’re taking $500 billion from Medicare”? — while Republicans seemingly paid no price for their cynicism. Voters focused on the extra money in their pockets, ignoring the long-run consequences of big tax cuts for the rich.


So what's different this time around?

For one thing, in 2000 the U.S. had a budget surplus, and debt had been falling relative to G.D.P., making concerns about long-run fiscal impacts seem remote. In fact, Alan Greenspan infamously argued that a tax cut was needed to keep America from paying off its debt too fast.

By contrast, the U.S. ran large deficits in the aftermath of the financial crisis, and the people who yelled loudest about an imminent debt crisis were the same people who pushed through a $1.5 trillion tax cut. And at least some voters seem to have noticed, and even made the connection between tax cuts and Republican attempts to undermine Medicare and Medicaid.


But there are other differences as well. The party of "family values" is an obvious fraud. And Americans have redefined families:

I mean, claims to be the defenders of family values have lost their punch partly because the public has become far more socially tolerant — Americans now support same-sex marriage by a two-to-one majority! — and partly because the current resident of the White House may be the worst family man in America. Flag-waving claims to be more patriotic than Democrats worked well for Reagan and Bush, but are much more problematic for a G.O.P. that looks more and more like the party of Putin.


Unfortunately, snake oil sales are way up in Ontario. We have yet to learn the lessons Americans are learning.


I don't know if Krugman is right, Owen. Trump's numbers this week were at 42% which, for him, is impressive. His base is hanging in which explains why GOP congressmen are still afraid to change course. McConnell wouldn't even let a bill to secure Mueller's job to come to the floor for a vote. That's very powerful cowardice.

I understand your concern, Mound. Trump's support from his base is troublesome and worrisome. In the end, I suspect Mueller will make a pretty impressive case against Trump. But it hangs on whether people like Cohen and Manafort will flip. In the end, it will take a smoking gun to bring Trump down -- and enough votes in the 2018 election to force the issue.

.. I have yet to see a credible Democrat candidate moving to the fore. We and I mean we North Americans may end up with more Trump or Mike Pence - both of whom are disasters for the Environment and for Democracy. Democrats need to get moving on this.

It's really imporatnat that the Dems choose an extraordinary candidate, Sal. The times and the danger Trump represents demand a stellar choice.