It Will Not Be Pretty 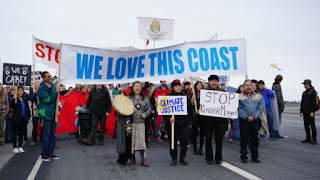 Michael Harris writes that it's approaching high noon in B.C:

This coming Saturday on Burnaby Mountain will be a little like Gary Cooper’s classic western High Noon.

It will be a reckoning with big-time consequences for both the federal government and First Nations in their continued collision over the Kinder Morgan pipeline.

There will be some star power attending the protest of the pipeline expansion that day, including 82-year-old David Suzuki. At noon, “bold action” is planned. That has usually been code for people getting arrested — which 200 of them have already been. The leading man of the show will be one of British Columbia’s most revered Indigenous leaders, Grand Chief Stewart Phillip.


Trudeau continues to claim that Canada can mine and ship bitumen while protecting the environment. British Columbians don't believe him:

First Nations people are not the only ones who reject Trudeau’s have-your-cake-and-eat-it-too approach to the conflicting realities of resource development and protection of the environment. The late Farley Mowat told me that a day would come when those two activities would collide, and that big government would always resolve doubts in favour of resource development.

Carl Rosenberg, who lives in the riding of Vancouver Granville, wrote a letter to PM Trudeau on one of the National Days of Action against Kinder Morgan’s project. It reflects Mowat’s view:

“You must decide whether your commitments are with Canada’s people (including its First Nations), with the environment, or with Canada’s oil industry.”

Internationally acclaimed writer, Ronald Wright, author of A Short History of Progress, is puzzled over how Trudeau has handled this file. As Wright told me at his home on Salt Spring Island, there is not much to be gained by his course of action politically speaking.

“Why is Trudeau spending so much political capital ramming through pipeline and tanker traffic? No matter what he does for Alberta, Alberta will never elect Liberals.”


This is an issue where you can't split the difference. But Trudeau continues to believe you can. When the two sides collide, it will not be pretty.

Image: National Observer
Posted by Owen Gray at 9:39 am

Email ThisBlogThis!Share to TwitterShare to FacebookShare to Pinterest
Labels: High Noon In B.C.

Trudeau and his Environment Minister keep telling us they have a plan to meet the The Paris climate goals. What they don't tell us how? At every opportunity McKenna tells us that they are right on plan to achieving their targets but won't give details. A carbon tax won't have any effect until it hurts deeply enough to persuade people to make changes. Does she plan that? Doubtful. Will she introduce carbon rationing? Of course not. Will she shut down the Tar Sands or put a stop to transporting dilbit anywhare? Nope. Will the government stop subsidizing carbon industries? Not a chance. So, What??? Details please!

And as Harris points out, it doesn't even make sense politically. The pipeline decision won't win any ridings in AB, but as a result the Libs stand to lose big in BC.

It was a stupid decision that could easily have been put off beyond the next election if Trudeau had simply kept his promise to dissolve the NEB and decide on the basis of scientific evidence.


Trudeau's attitude is "not in my back yard, no, in your back yard." I'm hoping that one or two forms of non-violent civil disobedience emerge, measures that people around the province can take to undermine this federal government. This reminds me of my undergrad days when some group, believed to be either the SDS or Weather Underground, torched the ROTC building on campus and burned it to the ground. Of course those guys weren't amateurs. They knew what they were doing. And they definitely did get their message across to the approval of most of the student body.

That's just the problem, Toby. The devil is in the details.

Justin wanted to have his cake and eat it, too, Cap. The tough decisions never work that way.

What's difficult here, Mound, is that Albertans are going to have to endure a substantial amount of pain. Once that fact is accepted, plans can be made to deal with a difficult transition away from the Tar Sands. At the moment, none of our political leaders is prepared to deliver the bad news.

.. ergh
Mound has paved a 4 lane highway over this tired topic.. of sellout zealot captured governments and of course Michael Harris, Lorne etc. as well. We really are having trouble 'following the money' as investigators tend to do. in this case is more like 'follow the votes' .. why our elected goverment is silent about Israel stealing Palestines offshore resources. Hell, you don't want to upset the Jewish vote.. that would be anti-semitic

So that's my vague analogy for the day.. it must be about the money & votes. The low hanging fruit so to speak, the donors. And of course the easy money from tiny royalty $ to offset the subsidy of foreign owned Big Energy. We know they will transfer ownership to shell companies, walk away and never repair the land, restore the waters or save the habitat of species.. Its what I now more and more call horseshit salad. Ms McKenna geting good at serving it, a horseshit salad .. her a handmaiden serving it up daily.. But wait ! There's more ! We gets Kenney and Scheer and the 'freedom for the guns'

April 20 we will see how many Canadian students walk out of school in solidarity with American students.. image that kind of horsepower hitched to environmental activism.. support of First Nations ! Political animals scurrying for cover or covering ass at the last moment. Trudeau Inc is basically Christy Clark and Stephen Harper on steroids.. and ms Notely needs to become an environmental advocate & forget about politics.. let Jason Kenney die on his twisted little hill. Harper a millionaire & he don't care

Never let any more of that dilbit head west or east. It aint 'energy security for Canadians' and never will be. Nor is fracking the be all and end all except of habitat, waters, species. Why are we trying to fuel Asia or Trump's Gulf Coast anyway? A fistful of dollars we never see a dime of ? What ? We just get to subsidize it? And the world class cleanup myth.. have a snort of pixie dust and a side order of unicorn stew with that.. ride a shiny pony, let the spinning wheel spin. We could feed the world, send them water.. but no.. we send them war wagons and dilbit.. and give away our lumber with the bark on and have closed our sawmills

That always happens when we try to do things on the cheap, Sal. There's a reason why the Bargain Basement is in the basement.

the latest article on cbc north about Canada dragging its feet on banning sludge oil for shipping ties in nicely with tankers full of bitumen in the inland waters of b.c. there can be no doubt now who runs this country.

The Oil Barons are still in charge, Bill.

that is what I mean't

Those with power fight to keep it, Bill.