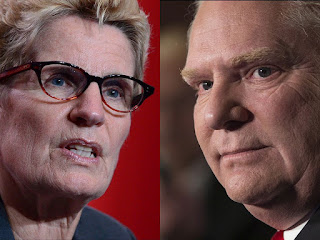 Jamie Watt is a Conservative strategist -- one of the gurus who guided Mike Harris' government in Ontario. I generally don't agree with what he has to say. But his take on the upcoming election bears some scrutiny. He writes:

The election is not going to be held today. It is, of course going to be held on June 7 after what I predict will be one of the most ruthless and cut-throat campaigns Ontario has ever seen.

We know that, when asked, about 8 in 10 Ontarians say it is time for a change. What we don’t know yet is exactly what they mean by that and therein lies the rub.

If they mean that after 15 years they have just had enough of the Liberals, then that’s a challenge for the premier. It’s a challenge because it means that the voters are done and, in the process of deciding they want change, they have stopped listening to what the government has on offer. In fact, they no longer care, they simply want something else. Think Mike Harris after Bob Rae. Justin Trudeau after Stephen Harper. Rob Ford after David Miller.

At these times, voters think things have gotten turned upside down; that the tail is wagging the dog, and that massive, even if disruptive, change is needed.


We may, indeed, be at one of those moments. But there is another possibility:

On the other hand, if voters want a change in the way government sets its priorities and delivers services to them, then change can mean a change in policies and programs and not a change in parties. In this case, think Alison Redford after Ed Stelmach. Redford skillfully moved her party to the left, embraced a new and changed Alberta and came back from a 22-point deficit to form a majority government.

And so the stage has been set. With Andrea Horwath inexplicably still on the sidelines, the Liberals and PCs are set for an epic grudge match.

If they are feeling left behind, that government is not working for them, that special interests have got the upper hand and that the elites are winning at their expense, then that’s advantage Ford.

If, on the other hand, they are feeling precarious, that daily life is getting harder, that enhanced entitlement programs make a difference for them, then that is advantage Wynne.


This election will be anything but dull.

Image: ottawasun.com
Posted by Owen Gray at 10:16 am

.. an election - 'anything but dull ..'
yes.. and an election not including Patrick Brown
or Rick Dykstra.. amazing
blown out of the water or on the rocks ?
Who knew ? And ms Whynne preserving her ammunition
Horvath lurking in the weeds ..
quite possibly with zero ammunition
At some point they start throwing rocks

As Watt suggests, Sal, this could get quite ugly before it comes to an end.