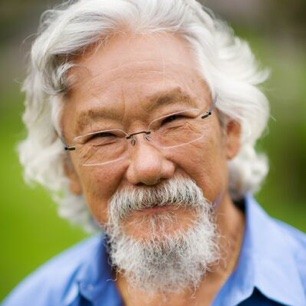 Albertans -- a good number of them anyway -- are making a lot of noise about the University of Alberta's decision to award David Suzuki an honorary degree. One of the loudest opponents of the university's decision is Conservative MP Matt Jeneroux. Michael Harris writes:

If more proof were needed that the Conservative Party of Canada has missed the boat on the most pressing issue of our times, it was recently supplied by Alberta MP Matt Jeneroux.

Consider the magnitude of Jeneroux’s stupidity and self-serving impudence. The university is not honouring Suzuki because of his stand on a single issue that is currently lighting up the news cycle. It’s giving him an honorary doctorate for a lifetime’s body of work in educating a popular audience about science. Suzuki has taken the arcane and made it approachable for millions of CBC viewers, surely one of the great triumphs of public television.

Besides the logical disconnect in Jeneroux’s irksome request of the university, there is another issue. What business does a federal MP have in trying to direct the decisions of an independent institution of higher learning?


Jeneroux's objection is yet another sign of modern conservatism's contempt for education. And Jeneroux is not alone:

This MP’s political blackmail of the University of Alberta is being matched by corporate blackmail touching the issue of financial contributions to the institution. It is nothing more than a naked manifestation of the power of the oil patch in Alberta, and now federal politics.

Donors like Moodys Gartner Tax Law are pulling their substantial contributions to the university because their clients are in the oil and gas industry. They say they are going to take their money and “make it speak” someplace else — whatever that may mean.

Dennis Erker has put it all on the barrel head. If the university doesn’t rescind Suzuki’s doctorate, the semi-retired Alberta businessman will end his fundraising and contributions to the university. Erker told the Edmonton Journal that the school could lose up to 50 per cent of its financial donations over an honorary doctorate conferred on the wrong person.


This is happening while the Chinese are "adding a 'London-sized' electric bus fleet every five weeks. That will displace 279,000 barrels of oil a day in 2018 alone."  And Toronto is currently deciding which of three types of electric buses it will use in the city.

For all it matters to those willing to accept the dominance of money in public affairs and the decision-making process, the plutocracy and its stooges have become refreshingly forthright.

I'm reminded of this one:

"My family is the largest single contributor of soft money to the national Republican party. I have decided, however, to stop taking offense at the suggestion that we are buying influence. Now, I simply concede the point. We expect a return on our investment."

Proud to be of service to ourselves: we'll assign the ignorance factor to the powerless losers in the audience who support us in all the little ways they do.

That's blunt enough for me.

Big money has always bred arrogance, John. Devos proves that ignorance is also no barrier to becoming Secretary of Education.


With the revelations of the past week from the National Observer, the Tyee, and DeSmogBlog, it is beyond evident that our governance, federal and in some cases provincial, has succumbed to corruption. It's not just the Tories. The Liberal government is corrupt, Justin Trudeau is corrupt. The rigging of the Trudeau government's remedial Trans Mountain review with a pre-ordained result is profoundly corrupt. Trudeau's breaking of his major election campaign promises on pipelines, social licence and First Nations consultation - all of those things were in furtherance of this corruption. Taking the federal chequebook to Texas to grease the wheels with Kinder Morgan - that can go onto the pile of a corrupt enterprise.

Harper made me ashamed of my country. Trudeau was supposed to erase that stain. Instead, he's perpetuated it.

Maybe I'm just getting grumpy in my old age. Maybe that damned sea lion whose faint but persistent barking roused me from my sleep at precisely 4:34 this morning has set me on a course for the day.

BTW, if you missed it, check out Greg Fingas' (Accidental Deliberations) column in the Regina Star-Leader.

These actions certainly reinforce the notion of Alberta as being quite benighted, Owen. Somehow, however, I guess those who are loudly proclaiming their threats regard them as a mark of deep pride and principle. The new solitude of the twenty-first century?

Thanks for the link, Mound.There hasn't been any real change. What we're getting is more of the same.

Maybe I'm just getting old and crochety, Lorne. But, more and more, it seems to me that we're blindly marching into the future.

Blindly marching into the future leaves us much less culpable than we are, Owen. The blind cannot be blamed for being unable to see.

The national crusade against Suzuki is a disgrace.
The action is quite comparable to racial or religious intolerance.

Would we accept removing such a honorary degree from a person because he or she is a Muslim or Hindu?
Perhaps ,in Alberta, they would do the same because of political affiliation?

On second thought ; maybe they would in Alberta!!

Things are getting prety irrational, TB. The argument has become unmoored from facts -- which even Ronald Reagan acknowledged are "stubborn things."