Out Of The Back End 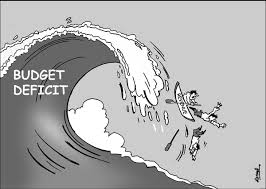 Nothing illustrates the utter hypocrisy of the Republican Party more than the tax cuts which were just passed in the United States. Republicans used to be classical economists. They officially believed in balanced budgets. That changed when Ronald Reagan and both George Bushes assumed the presidency. Jonathan Chait writes:

The official conservative party line during the Reagan era, when Republicans introduced the modern phenomenon of the large structural deficit, was that it was necessary to run the red ink in order to win the Cold War. Then, under George W. Bush, the response to the 9/11 attacks became the new rationale: don’t ya know there’s a war on terror? Notably, and in keeping with the anti-intellectual spirit of the times, conservatives have not even bothered formulating a rationale for increasing the deficit during the peak of an economic expansion. They’re doing it for the same reason they’re undertaking every other abuse of power during the Trump era: because they can.


According to the Congressional Budget Office, there is Republican red ink as far as the eye can see:

CBO now estimates the 2018 deficit will be $242 billion higher than it had estimated last June, before the tax cuts. And the tax cut is the major reason: “Accounting for most of that difference is a $194 billion reduction in projected revenues, mainly because the 2017 tax act is expected to reduce collections of individual and corporate income taxes.”

The deficit is expected to grow to more than 5 percent of gross domestic product. That would make sense if the country was spending to counteract a serious but temporary emergency, like a recession or perhaps a major war. There is no such emergency, though.


When there was an emergency, and Barack Obama ran deficits in response to the Great Recession, the Republican line was that Obama's deficits had put Western Civilization on the edge of oblivion:

Republicans treated deficits of this scale as dangerous portents of civilizational collapse during Barack Obama’s first term, when the economy was recovering from the greatest financial crisis in three-quarters of a century.


Their theory is simple and the ugliest of lies: When Democrats run deficits it's a sign of their evil intent. When we do it, we're -- as we always have been -- on the side of the angels.

It's the same stuff that comes out of the back end of a cow.

Image: bankersadda.com
Posted by Owen Gray at 9:16 am


What is the foundational problem? Can it be laid at the feet of the parties and their legislators or does some of the blame belong to an electorate that has become their marks? This has been going on for decades and yet the voting public, or a significant segment of it, has accepted every straw man raised, every whipping boy put in their path. Again and again and again they have been willing dupes ready to vote directly contrary to their own and their countrymen's best interests. Civic consciousness has not been this low, certainly not in my lifetime. Trump's "birther" campaign against Obama demonstrated the appetite of the masses for conspiracy theories. In this semi-addled state it's child's play to strip them of their political power, individual and collective and that is a net sum game, the power lost by the masses migrating to another, narrower interest.

It would seem, Mound, that the voting public is simply stupider than they were two generations ago. As Neil Postman wrote back in the 1980's, they are "entertaining themselves to death" -- oblivious to what is going on all around them.

This has been engineered. It is difficult to manipulate happy, contented people. It is easy to manipulate angry, fearful people. We have had two generations of angry talk radio hosts, a steady diet of explosive cop shows and news media telling fibs, anything to make us angry and fearful.