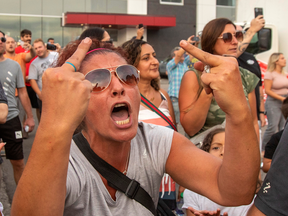 There's a bad mood in the air. Susan Delacourt writes:

This election campaign, soon to be over, has essentially been a bad mood looking for a place to land.

For Trudeau and Conservative Leader Erin O’Toole, all the roiling, negative emotions running loose in this campaign may make the difference between victory and defeat on Monday. The sheer closeness of that red-blue contest, in fact, would seem a testament to a lack of widespread enthusiasm for either option.

Trudeau’s biggest problem isn’t the ugly mob anger he’s denounced so frequently along the trail. It is anger’s close relation — disappointment — and the prospect of disillusioned former Liberals flocking to the New Democrats and other parties.

O’Toole’s biggest problem, on the other hand, is anger that threatens to weaken his party from either side.

Both of the main contenders are deeply distrusted by certain voters:

Some disaffected Conservatives don’t find O’Toole sufficiently aggrieved and are drifting to the People’s Party, the outlet for white hot resentment of everything from pandemic restrictions to Trudeau. Other potential voters — those disappointed Liberals, for instance — may be worried that the face of the Conservative party remains too angry and negative, even after all O’Toole’s efforts to put a confident, smiling face on the campaign.

“Look, I will tell you I’m blown away by the number of prominent former Liberals, current Liberals voting for us in this election,” O’Toole said. “There are dozens that talk to me personally and some may even talk about it this week.”

He says he likes to see himself as a leader who “is not showing contempt for people that haven’t voted for us in the past.” One wonders whether this memo has gone out to MPs who have made their mark casting Liberals as evil over the past few years — Pierre Poilievre, for instance, or Michelle Rempel.

Justin claims that the other parties are selling cynicism:

The Liberal leader is accusing the other progressive parties — whether that’s the NDP, the Greens or the Bloc — of fuelling a lot of this disappointment, to the point of outright cynicism. Rather than accuse the Liberals of not doing enough, Trudeau says, their strategy in this campaign has been to say that the government has done absolutely nothing — on reconciliation, on income inequality or child care.

We're not happy campers. One wonders how happy we'll be when this election is over.

The anger we're seeing and the threats of violence and increasingly the use of violence such as stone throwing have little to do with the pandemic despite all the anti-vax signs. This is what happens when a country begins the transition from being a democratic and generally polite society into one that embraces authoritarianism.

The anger and resentment always starts from the top down, with leadership setting the initial tone. It's no secret that O'Toole and Bernier, and their surrogates, have been stoking personal animosity towards Trudeau for years. Their supporters are simply acting that out on the campaign trail and over social media. While Canada is not as far down the road to authoritarian government as our US friends, this is nevertheless a worrying development.

Sometimes a minority government is a blessing.

The news from Alberta could be this elections' "October surprise".

Kenney's latest confusing capitulation only goes hallway on vaccine passports and makes the biz owners the 'bad guy' to either the vaxxed or the anti-vaxxed. Kenney's sorry/not sorry and the rumours that he broke a deal he had made with O'fool (to wait till after the election) could be toxic. The timing of this health crises eruption in Alberta means the execrable pollsters won't likely catch its effect before Monday but lets hope it drives blue votes to the purple, red and orange parties on Monday!

And. last night, old Brown-Bags-of-Cash let slip about the 'tough and deep structural changes' that are the CONs real agenda . This of course, pisses all over the fuzzy, warm return-to-the-fifties O'fool message that the media has been assisting with.

If the reported hurt-feelings-Bloc-surge is real we could have a real dog's-breakfast Parliament, so splintered that it leads right to pro-rep.

If the Bloc surge is bs (what I suspect) then Jr. might just get his undeserved majority.

The anger should tell us that we're not immune from the Trumpian virus, Cap.

I agree, TB. That's essentially why proportional representation is a good idea.

I was struck by the line in Delacourt's article about how many Conservatives don't find O'Toole sufficiently aggrieved. That certainly manages to capture the zeitgeist of the extreme right, in my view, Owen.

"This election is still utterly unpredictable, PoV."
Yes and no, imho.

Lib minority is likely, Lib majority is second most likely. End of unpredictability!

If O'fool squeaks through, I'll quadruple my donation to the Rainforest Flying Squad*. ;-)

*An excellent cause that I can recommend to you all:
https://fundrazr.com/last_stand_for_forests?ref=ab_1OAgDNey3bK1OAgDNey3bK

Thanks for the link, PoV. I'll wait to see what happens.

It seems to me that the cognitive dissonance between O'Toole and his party is loud and undeniable, Lorne.

Oh my! There's no question that Mr. O'Toole has brought a much friendlier tone and a smiling face to this election than previous CPC reps have, but I tend to think that if the Cons do manage to pull off a minority and get the PM seat, it won't take long for a CPC coup to occur that will see a more Reform based Con take over. The hand of Harper has never been off the tiller! and that scares the H--- out of me. I keep wondering where Jason, he of Alberta, was hiding for those 4 weeks he disappeared while the pandemic was wringing its hands with glee.

Spent a few days on Van Island recently and driving around was really surprised to see the number of PPC signs in yards as well as at every major intersection. This could drain some votes from the Con candidate, altho with Paul Manly, who is well known as well as well liked is still running for the Green and could even end up being the only Green in Parliament.

Its anybody's guess in some areas/regions, Owen, so I guess we just wait until Monday night? Wish us all good luck.....

Let's hope we're wise enough to choose the best way out of this mess, Lulymay.

There is so much confusion over the latest restrictions announced by Tinkle Toes last evening, people are asking if they will be able to vote on Monday. Imagine having to make sure one can vote. It looks as if it will be necessary to stay over night to keep your place due to masking and distancing wether vaccinated or not and all due to the disgusting attitude of Kenney. Then again, is this an attempt to disrupt Federal voting? Kenney literally “hates” Trudeau. Anyong

You folks in Alberta are really having a tough time, Anyong.

At the end of the day O Toole , Kenny and their ilk have fallen for the Trump syndrome of promising one thing to one group in the morning and promising another to another group in the afternoon..
Catering to the masses does not make for good government.
Leadership of the masses is difficult.

I agree, TB. Leadership in a big, diverse, and divided country like Canada is difficult.