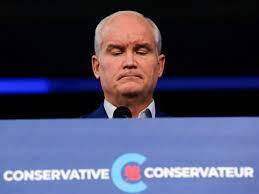 The rumblings against Erin O'Toole began on the day after he failed to become prime minister. But, Chantal Hebert writes, the Conservatives should keep O'Toole as their leader:

It is certainly possible to find someone liable to comfort the Conservative base in the long-held convictions O’Toole’s campaign has challenged. But before the CPC refights internal battles over issues like carbon pricing or vaccine-related measures, its members might want to consider that the first will have become a time-tested federal policy and the second will have been put to rest by the time the next election comes around.

Fiscal and economic policy — areas that once played to Tory strengths and could still in the future — will inevitably loom larger once the pandemic is resolved.

And then, if there ever was a time when the conservative movement could ill afford to be dragged into a civil war over its federal leadership, it is probably the coming year. The Conservatives are about to have other fish to fry on the provincial scene.

In the provinces, all hell could break loose:

That starts with Ontario and the upcoming spring provincial election. And then there is the fractious situation in Alberta where the fate of Jason Kenney as premier and the party’s place in government both look like they hang by a thread.

It's always been hard to hold the Conservatives together. It's worth remembering that both the Bloc and the Peoples Party splintered from the Conservative Party. Fighting among yourselves is not the way to win elections. Just ask Anime Paul.

The line: "Fiscal and economic policy — areas that once played to Tory strengths and could still in the future" ... is indicative of why I can only agree with Chantal Hebert on a limited basis.

The fact of the matter is that conservative economic policy is based on a simplistic ideology with the only innovations being to provide whatever short-term benefits some influential capitalist sector short-sightedly desires. Their policies fail and impoverish more than they ever succeed. To say otherwise is delusional.

The historical record is pretty clear, thwap. With few exceptions, the economy does better under progressive governments.

Losers used to quit on election night, saving themselves the disgrace of being shown the door. O'Toole was losing party support going into the election and it's absurd to hang around hoping for a second chance. I suspect he'll be around just long enough to line up some cushy directorship.

Andrew Scheer tries to hang around, Cap. It didn't take long for him to change his mind.

It's difficult being a conservative today. Ask any Republican. The radical fringe has become mainstream. Even Mitch McConnell soils himself at their approach. Trump's brown shirts, a.k.a. the Treason Caucus, are most successful intimidating moderate Republicans and sowing chaos in Congress.

The far right seems to be stalling out in Europe, France and Germany in particular.

In the States, Tucker Carlson is now reviving the "replacement theory" - a work of sheer anti-Semitism spawned by white supremists. He's even invoked the term "legacy Americans" to enshrine white Christian Americans. Rupert Murdoch is silent, perhaps fearing his top-rated bigot will join Hannity and defect to the One America network.

Has Hannity defected, Mound? I wasn't aware of that. If so, good riddance.

I just checked and there's an official One America News Network Canada. So far it seems to be little more than a mirror of the US site. Maybe it will be the next home of Ezra.

As usual, Mound, it must be all about the money.

Let's hope its fate is the same as Sun News, Mound.