Pearson On The Election 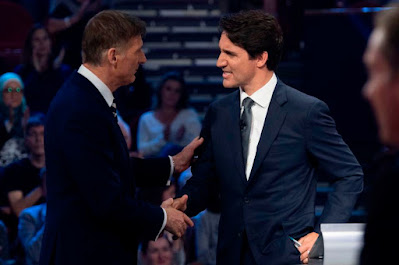 I read Glen Pearson's commentary regularly. His take on the election is insightful:

Many have delighted in telling whoever will listen that this country is moving steadily along a progressive path.  It’s hard to argue with such statements.  Everyone seems to have an opinion on Justin Trudeau, many of them unnecessarily extreme, but his record is a progressive tour de force.  Though only in power for six years, he has refined the NAFTA agreement, developed a somewhat credible plan on carbon reduction, welcomed a successful share of global refugees, centred indigenous reconciliation in national policy, at least in words and sometimes in deeds.  Essential to people working in the anti-poverty movement, Trudeau has reduced child poverty to levels unseen in many years.  His failure to commit to his electoral reform commitment in his first mandate will remain a deep stain on his legacy. Still, his years in power have left some impressive accomplishments for all the negatives aimed at Justin Trudeau.

So, yes, given the reality that the country has returned him to power, for now, the third term, speaking of a “progressive” age, is a credible claim.  But little of this has happened in a vacuum.  While the election extended the progressive wing of Canadian politics for another two or three years, the polarization it manifested drove opposition forces as they became ever more profound in their angst.

That angst was most apparent in the People's Party of Canada:

The depth of that change was perhaps best displayed by the rise in popularity of the People’s Party of Canada.  Some never saw that coming, yet it created such an effect that many worried about the rise of the angry right.  And with many Conservatives concerning with O’toole’s move to the middle, some might drift further right. Pollster Eric Grenier, in his credible assessment of the just concluded political contest, saw evidence of this troubling trend.

“The People’s Party made some significant gains but still didn’t quite meet the level of support they had in the polls. But they were up five points in both Alberta and Saskatchewan and six points in Manitoba. They gained four points in Ontario and New Brunswick and three in B.C. and Nova Scotia. They were only up 1.3 points in Quebec.

While it appears that the progressive movement in federal politics has found success three elections in a row, it is creating its own opposition as it attempts to forge a new future for Canada.  The pandemic response only exacerbated that growing division, ensuring that hatred of Trudeau will remain a political staple for the near future.

The Liberal minority provides Trudeau with some stability. No political party wants an election for at least two years -- perhaps three. But those three years won't be without high tension.

If Pearson is right and Trudeau has achieved a "progressive tour de force," (which I question) then a reactionary pushback can be expected. Unlike the cash-strapped Greens who managed only 252 candidates in the 338 ridings, the PPC ran a full slate. That takes money, lots of it. A lot more than what a lunatic fringe of anti-vaxxers can provide.

As always, follow the money. Whose ox have the Libs gored? Judging by the radio ads and the signs among the anti-Trudeau protestors, Big Tobacco is upset about restrictions on its flavoured vaping products. Motive, opportunity, history of earning money by killing people - not hard to see them funding Bernier's crew. Maybe some reporters should look into it.

If the Liberals represent 'the progressive movement in federal politics,' that's small comfort to progressives. But, then again, he's making a relative comparison between just two parties, Conservative and Liberal. Curious that Pearson omits the New Democrats as progressives but hey.

People will argue about Trudeau's progressive credentials, Cap. But there is plenty of non-progressive blowback.

That's a glaring omission, Mound. But what concerns me more is the non-progressive opposition.

One could say Trudeau is progressive, but it depends upon who you compare him to. He might be much more progressive if he had a clear majority and wanted a "signature" piece of legislation, but that may not be possible. He has made major changes in the country and the one I like best is the child cheques which are sent out every month. they reduced the number of children living below poverty by 250K. That is progressive. It would have been better if the provincial governments didn't claw it back, but it demonstrates how little provincial governments care about child poverty.

I've always voted NDP, but I'm not unhappy that Trudeau is P.M. I'd prefer Singh, but at least I got two out of three as the song says. There were improvements in Indigenous clean water programs.

Very happy O'Toole isn't P.M. Just can't trust the federal Conservatives to not raise the issue of the right to abortions and remove gun controls. They also aren't that impressive when it comes to child poverty. They're big on tax credits, but that benefits the middle class.

Bernier is a joke, but then some of his actions aren't so funny, i.e. advising his followers on twitter to not be nice to reporters. He was banned from twitter for 12 hours for his comments because it had a huge ugly impact on some reporters. One reporter received a tweet suggesting she be raped and murdered. Bernier is an idiot and cares nothing for the people of this country. He has tapped into the "angry" people and sees them as his ticket to somewhere or something. It feeds his ego I'm sure.

There are degrees of progressivism, e.a.f.