Someone Has To Go 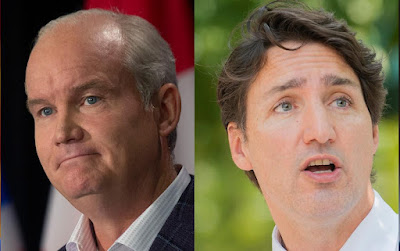 When this election is over, Chantal Hebert writes, either Justin Trudeau or Erin O'Toole will have to go. In Trudeau's case, the calculation is simple:

Trudeau made the call that put his top job and the Liberals’ hold on federal power on the line more than two years early. If the Liberal ship goes down on Monday night, he will be widely expected to walk the plank.

In similar circumstances, most outgoing government leaders tend to not wait for the morning after the vote to announce their resignation. But things could play out differently in this instance.

Win or lose, the party has exceeded pre-writ expectations. Few, even within Conservative ranks, believed O’Toole would manage to run as competitive a campaign.

The problem is that, when it comes to policy, O'Toole has been all over the place:

Since his leadership bid a year ago, O’Toole has gone from promising to scrap the tax to proposing to weaken it to looking to the provinces for guidance.

The road to Damascus O’Toole has chosen to take on gun control, the future of the CBC or that of the child care agreements Trudeau has struck with seven provinces is equally foggy.

And then there was the decision to propel Brian Mulroney to the centre stage of the Conservative campaign.

Make no mistake, the former Tory prime minister is a well-respected figure in his home province of Quebec. And he has a nostalgic following within what is left of the progressive wing of the Conservative party.

But his name is also anathema to much of the Conservative base west of Quebec. While O’Toole and his campaign revelled in Mulroney’s aura, Stephen Harper has remained unnamed and unseen. This is not a development many of the Conservatives who supported O’Toole for the leadership could have seen coming.

And then there was O'Toole's claim that Jason Kenney had handled the pandemic better than Trudeau. Those could wind up being O'Toole's famous last words.

Soon we'll know who will be heading to the exits.

I can't fathom the process whereby someone who can tie their own shoelaces would even consider voting Conservative.

The one silver lining if Trudeau loses this gamble is that we may "finally" well at least since 1993 with Kim Campbell's brief tenure, shatter the glass ceiling and break up the good ole boys club at the top in Ottawa. We are long overdue for a female Prime Minister and there are many women worthy of the title. so let O'Toole take have his wrecking ball to Canada and make it great again, and cadre of idiot deranged MP's for a couple of years and then we pass the torch to a competent female Prime Minister and stellar diverse cabinet. That's my wish for Canada. BC Waterboy

A pox on them both. Neither party, however, seems to have a natural successor in the wings.

Freeland has no great following. I can't see Canadians warming to her. Garneau is too self-absorbed.

As for the Tories, they're deeply divided - west v. east, moderates v. hardliners. There are too many hot button issues. They don't have a lot of depth in their front or backbenches. Poilievre would take his shot but even Tories think of him as an opportunistic weasel. My veteran Tory friend from Ottawa doesn't see him going anywhere.

My political friends seem to agree that the talent pool, Conservative and Liberal, is awfully shallow. It's mainly B-list talent. You could say much the same of Trudeau, Scheer and O'Toole. They're not the leadership material we need for the difficult and possibly dangerous challenges facing our nation. The A-listers appear to be steering clear of both parties.

O'Toole is safe as long as he does reasonably well and Trudeau doesn't win a majority and better yet loses seats.

It's Tredeau who most likely to get booted even if he wind based on expectations. Trudeau was expecting and planning to win a Majority, heck even the Tories were expecting a Liberal Majority so expectations for O'Toole (and Singh) were very low, Trudeau they were very high and this has been truly humiliating for the Liberals.

So I expect with Freeland's encouragement Trudeau will take a "walk in the snow".

It's long past time for a female prime minister, waterboy. But I still have no idea how long it will take before a woman heads one of the three national parties.

I don't buy Hebert's reasoning for O'Toole possibly staying on after a Con defeat. Under Scheer, the Cons won the popular vote and reduced the Libs to a minority, but that wasn't enough to secure Scheer's leadership. In O'Toole's case, the knives were already out for him heading into the election. Only a win will save his bacon.

As for Trudeau, another minority government will likely be his last. The Libs kept the FPTP system because it offers unearned majorities. If you keep getting minorities, you're out.

Why go into politics, Mound, when you have to survive in a swamp?

Another Trudeau did just that, Gyor.

Like athletic coaches, Cap, the parties choose you to deliver the big prize. When you fail to do so, they send you to the showers.

1) As a BC resident, I'll know that it is a Lib win before the ballots are counted here.
Kenney's bomb, PPC strength and Green washout (esp where they have no candidates) has made a Lib majority a possibility. BC may have some happy Orange upsets that wrecks that.

2) Trudeau will be safe but happily hand off the baton to Freeland or Carney before the next election. He and his family will launch a reality TV show with Harry & Megan. A lot of travel and cosplay, errr cultural exploration will be involved.

3) O'fool? who knows, who cares. A bad enough defeat could open the doors for Mad Max's return.

4) Jagmeet stays for one more round.

.. aside from the actual results of the election,
winner loser etc & what it all means blah blah

This all within a Federal Election
to hold off on informing citizens, a dreadful update..
and intense required Healthcare restriction levels
from Alberta's 'Best Summer Ever' wreckage

That is/was Alberta
running a pipeline of partisan data, mouth running noyz
Held up as the gold standard for emulation (& votes)
by the brain trust and mouthpiece of THE PARTY
the one, the only.. Erin O'Toole

Alberta should provide all of us with a cautionary tale, sal.

Interesting speculation, PoV -- some of it pretty wild.

What a cringing bore of a campaign. The skirmish between small minds. Voting for either of these people is surely merely the difference between choosing to put butter or margarine on your slice of Dempsters inorganic air-blown fluffy ersatz 12 grain looks-like bread, toasted. Yech. Fake cooked bread with natural topping or fake cooked bread with hydrogenated vegetable oil byproduct topping. Only the butter's any good but it's just slathered gloss on top of a slice of toasted BS.

I make my own real bread, got some undergoing second rise in pans right now. An hour maybe an hour and 15 minutes from now, and mmm, mmm. Any resemblance between real bread and machine-made factory baked doughy fluff is in the looks department. The substance is entirely different.

Fire them both, those two. I can't even stand to listen to either of them blathering away on a news clip. It's embarassing to the country and me personally to listen to their fakery. So I don't. My mind is a precious thing to me, so why torture it?

I suspect a lot of people feel as you do, Bill.

I actually am beginning to wonder if the Libs may pull off a small majority. With O'Toole's distinguished press conference performance the other day, Kenny's horrible Covid fiasco and O'Toole's flip-floping on all sorts of issues I wonder if we might see enough defections to the PPC on one hand and the NDP on the other to cost the Cons some marginal seats that likely would end up Liberal. Some might even go NDP but probably not enough to upset a small Lib majority.

Did Trump change politics around the world or was it so screwed up before.

I have no idea how the last votes will break jrk. It all depends on how angry people are -- and who they are angry with.

The anger in this country is evidence that the Trump virus has come across the border, TB.