The March Of The Misinformed 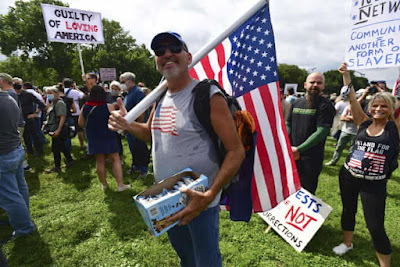 Yesterday's protest in Washington was a dud. Chris McGreal writes in The Guardian:

As a protest, it was a flop.

Turnout was at best half of the 700 predicted by organisers, which in itself fell well short of the many thousands who stormed Congress in January. The event organiser, Matt Braynard, a former Trump campaign operative, blamed the poor attendance on government intimidation and press scaremongering.

A woman who identified herself as the girlfriend of Jonathan Mellis, a man charged with crimes including assault, said he was being held in solitary confinement. She read a letter in which he claimed: “This reminds me of how the Jews were treated by the Nazis.”

A man who identified himself as Adam from Florida [was] holding an American flag with the Roman numeral III in the corner. That, said [organizer Matt] Braynard, was a symbol for a far-right militia, the Three Percenters.

“It’s an outside group and it makes the optics look bad,” he said, telling Adam to put the flag away. “Anyone who doesn’t agree to take it down we have to assume is an infiltrator.”

Adam professed ignorance of the association – but rolled the flag up.

Anders Bruce, a 30 year-old organiser with Look Ahead America, said he was there to seek justice for “prisoners of conscience” subject to political persecution.

But who is responsible for that persecution when the prosecutions began under the Trump administration?

“It shows that it’s a problem with the government under both political parties,” he said.

And where was their hero? He was in New Jersey playing golf.

The March Of The Misinformed continues.

Email ThisBlogThis!Share to TwitterShare to FacebookShare to Pinterest
Labels: The Washington Protest

They're like a recurrent rash or herpes. The afflicted never can predict the next outbreak but there's no cure.

I read somewhere that the journalists outnumbered the protestors. The media's hardwired for Trump and miss him badly.

From a Trumpian perspective, Cap, this went horribly wrong.

The line about the flag reminded me of one of the flags at the Dec 6 attempted coup. A man was carrying the flag of Georgia as he stormed the Capitol. The Georgia that is just a bit south of Russia not he one that is a bit south of Washington.

I hadn't heard that anecdote, jrk. More evidence that these folks are swimming in the shallow end of the gene pool.