Not What They Used To Be 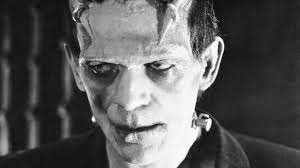 Maureen Dowd writes that monsters are not what they used to be:

I’m reading “Frankenstein” by Mary Shelley for school and the monster is magnificent. He starts out with an elegance of mind and sweetness of temperament, reading Goethe’s “The Sorrows of Young Werther” and gathering firewood for a poor family. But his creator, Victor Frankenstein, abandons him and refuses him a mate to calm his loneliness. The creature finds no one who does not recoil in fear and disgust from his stitched-together appearance, his yellow skin and eyes, and black lips. Embittered, he seeks revenge on his creator and the world.

“Every where I see bliss, from which I alone am irrevocably excluded,” he laments. “I was benevolent and good; misery made me a fiend.”

Before he disappears into the Arctic at the end of the book, he muses that once he had “high thoughts of honour,” until his “frightful catalogue” of malignant deeds piled up.

Like Shelley's creation, Donald Trump is also a monster. But

Shelley’s monster, unlike ours, has self-awareness, and a reason to wreak havoc. He knows how to feel guilty and when to leave the stage. Our monster’s malignity stems from pure narcissistic psychopathy — and he refuses to leave the stage or cease his vile mendacity.

It never for a moment crossed Donald Trump’s mind that an American president committing sedition would be a debilitating, corrosive thing for the country. It was just another way for the Emperor of Chaos to burnish his title.

The House Jan. 6 committee’s prime-time hearing was not about Trump as a bloviating buffoon who stumbled into the presidency. It was about Trump as a callous monster, and many will come away convinced that he should be criminally charged and put in jail.

The hearing drove home the fact that Trump was deadly serious about overthrowing the government. If his onetime lap dog Mike Pence was strung up on the gallows outside the Capitol for refusing to help Trump hold onto his office illegitimately, Trump said, so be it. “Maybe our supporters have the right idea,” he remarked that day, chillingly, noting that his vice president “deserves it.”

Boris Karloff's monster scared generations of moviegoers. But he was just a shadow on a screen. Trump is the real thing. And the damage and chaos he has caused -- and continues to cause -- is real.

Email ThisBlogThis!Share to TwitterShare to FacebookShare to Pinterest
Labels: Trump The Monster

The monster is us. Trump is just the pus-filled yellow head.

There is truth in what you say, PoV. Frankenstein created the monster that destroyed his world.