The Government Must Protect Her 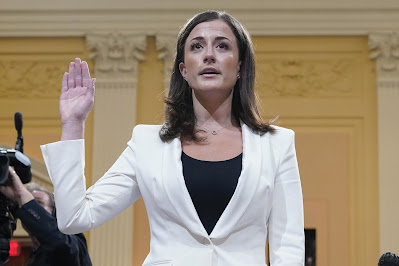 The testimony in Washington yesterday was explosive. Ruth Marcus writes:

An out-of-control president lunging for the wheel of his limousine to have it take him to the Capitol on Jan. 6, insisting that he did not care whether his armed supporters were subjected to security screening because “they’re not here to hurt me.” An ineffectual, overwhelmed White House chief of staff who understood that “things might get real, real bad on Jan. 6” — and did nothing to prevent it. An alarmed White House counsel who warned of the president’s inaction, “Something needs to be done or people are going to die and the blood’s going to be on [his] f---ing hands.”

Never in American history has there been a portrayal of a president so unfit for office or so willing to betray his oath in a desperate bid to retain power. Never have so many people in such positions of immense authority stayed so shamefully silent for so long about the horrifying behavior they witnessed, on Jan. 6, 2021, and before.

And never has the nation witnessed the drama of a staffer so young, composed and resolute describe witnessing a constitutional disaster that she was unable to prevent — “a bad car accident that was about to happen, where you can’t stop it but you want to do something.”

Donald Trump suffers from more than a personality disorder. He's mentally ill. Yet there are so many who are willing to kiss his ring. Cassidy Hutchinson isn't one of them:

In an administration of enablers, in a crowd of sycophants unwilling even now to stand up to Donald Trump and speak publicly about his unhinged conduct, 25-year-old Cassidy Hutchinson, a former assistant to White House chief of staff Mark Meadows, emerged from obscurity Tuesday, an unlikely — and lonely — truth-teller.

Hutchinson was the perfect witness to testify to the dereliction of duty she observed in the final days of the Trump White House, a Trump believer turned reluctant informant. Her GOP bona fides, including internships for House Republican Whip Steve Scalise (La.) and Sen. Ted Cruz (Tex.), could not have been more impeccable, nor her demeanor — calm and sorrowful — more convincing. She was John Dean in a white blazer and diamond necklace, reciting a similarly damning cavalcade of facts.

She had literally cleaned up after the president — helping the White House valet scrub ketchup off the wall after he threw a plate in fury over his attorney general’s conclusion that voter fraud had not caused his election loss. But her breaking point arrived on Jan. 6 — and in the end, she was willing to abandon the code of complicit silence that still prevails among too many of her former colleagues.

The MAGA mob will threaten her safety. The government must protect her -- twenty-four hours a day.

All this shows just what people think of themselves when they reach the heights of power so called. We the people coined by an ancestor of mine, is where the attention of any Prime Minister or President ought to be at all times. When that is seen to be absent, the LAW ought to be solicited immediately. We knew before Trump became President he did not possess a full deck. The truth teller needs to be protected without fail. My hope is she will be. Anyong

Truth has a very difficult time these days, Anyong.

The feds won't be able to protect Hutchinson, or anyone else, if Trump gets back into power. The best thing they could do is to indict Trump and send him to prison. Yet despite mountains of evidence, much of it on video, of crimes worse than Nixon, all we hear from the DOJ is crickets. The shot clock on US democracy is running out.

I can only imagine how terrible the life of this brave young woman is about become, Owen. No doubt an avalanche of hate and death threats has already commenced.

Clearly, Cap, there is enough evidence to bring Trump to trial on several counts. The problem is going to be finding a jury of twelve people who will convict him.

She's only twenty-five years old, Lorne. And a mountain of hate is about to come down on her.

Yes Owen, truth does have a difficult time these days but that does not mean, we cannot do every thing to fight for “Truth”. Anyong

11:34……Then they ought to be putting out a call across the US to find twelve people to sit on a jury. Anyong

If Trump goes to trial, maybe a move to another jurisdiction, perhaps Puerto Rico, might be in order? :)

And, if they jail him there, jrk, they can throw paper towels into his cell.