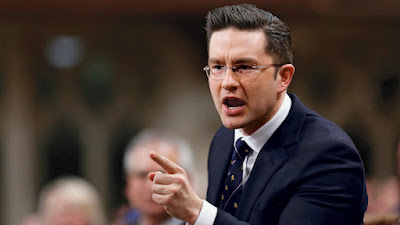 Michael Harris writes that Pierre Poilievre is an anger merchant. The Conservative Party appears to believe that he will be their ticket to power:

The CPC has managed to convince itself that retreads from the old Harper government can take them back to power—even though the record shows that the two times the party has tried that, it has lost at the polls.

And no wonder every mildly progressive Conservative leadership candidate is reviled by the party establishment with a zeal normally reserved for attacking the government. If the party wanted “reasonable” candidates, it would not have dumped Patrick Brown, and Jean Charest would not be looking at Poilievre’s tail-lights in the leadership polling.

But the CPC doesn’t want reasonable, it wants aggrieved. It wants the new leader to steer away from policy ideas of the kind Charest has injected into the contest in order to reflect the anger that is bubbling up in this country and the United States. Widespread public anger is their ticket to ride—or at least they think so. And maybe it is. There is certainly a lot to be angry about.

And there's a lot to be aggrieved about these days:

Gas, home heating, houses, groceries, travel (if you call being put in storage at airports travel), have all skyrocketed in price. Inflation is pushing ominously close to ten per cent year-over-year. Everyone is feeling the pain.

Central banks are raising interest rates to cool off the economy, which will put a lot of debt-laden homeowners underwater. Every time the rates go up, it feels to regular people the way it does when their dentist hits a nerve while drilling a tooth. And there is no guarantee that this tricky game of tightening the monetary belt won’t lead to a recession or worse.

And then there is the loss of faith in political leaders and institutions. Recent polling from Angus Reid showed massive dissatisfaction in Atlantic Canada with the health care system—a system that will be further ravaged this fall and winter, when the folly of reopening during an ongoing pandemic will be exposed by new and far more infectious sub variants of the virus.

Political leaders have been whistling past the graveyard on this one, hoping it will go away. It will not. When the seventh and eighth waves of the virus start rolling and restrictions have to be reintroduced, there will be hell to pay.

But beware. Our southern neighbours should remind us of what happens when anger takes centre stage:

It works by transforming anger into hatred, and then training that hatred onto individual people. Policy becomes an afterthought, unless you think firing the head of the Bank of Canada or cryptocurrency as the answer to inflation are policies.

Politics at that point becomes irrational and extreme. That’s when the “lock-her-up” chants carry the day, and the “Fuck Trudeau” signs appear. That’s when a Hillary Clinton gets demonized and a Donald Trump gets elected, and maybe re-elected, despite mounting and damning evidence that if anyone tried to steal the 2020 election it was Trump.

Canadians should beware of Pierre Poilievre:

But before backing Poilievre’s sneering and cynical brand of politics, Canadians should keep in mind that a vote cast in hate is a wound on the country. And they should also remember that Poilievre’s idea of peace, order and good government was the Truckers’ Convoy.

As always, Harris hits the nail on the head.

I wonder how much under-the-table American money is pumping up Poilievre's campaign. Canada is ripe for the plucking and the vultures are circling. Health care is high on the list of targets. We have several Premiers who want to privatize health care and are doing whatever they can to frustrate the public system. I'm sure Poilievre would put an end to public health care.

Given the American money that poured into the truckers, Toby, I wouldn't be surprised to find that he's vacuuming up lots of American money.

I see Skippy as the pissant Jack Hunter yelling "kill the pig" to Charest's Ralph.

Not a bad analogy zppmbats.

Anonymous Toby said...the vultures are circling. Health care is high on the list of targets.

here In BC, Dr Day is once again challenging the courts to open up BC to private health care.

The wolves are already at the door.

There is an army of the wealthy who are quite prepared to take down medicare, TB.