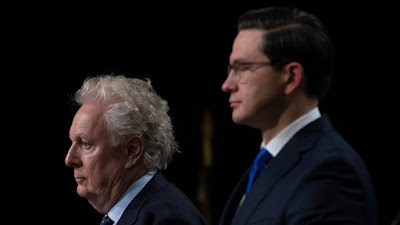 Konrad Kakabuski speculates that we may soon see a rebooted Progressive-Conservative Party of Canada:

The party looks set to embrace the grievance politics of U.S. Republicans and the European far right, just as Prime Minister Justin Trudeau and his fellow Liberals always hoped it would. They know that, faced with a Conservative Party leader who gives succour to misguided anti-vaxxers, angry truckers and right-wing conspiracy theorists, mainstream Canadian voters will opt for the comparatively safe Liberals, no matter how irritatingly woke the party’s leadership becomes.

Some supporters of Poilievre rival Jean Charest have concluded as much and are already musing about the creation of a new centre-right political party that would look, well, a lot like the old Progressive Conservative Party Mr. Charest led between 1993 and 1998.

Oddly enough, the possibility of creating a new-old political home for Red Tories has even been publicly evoked by the co-chairperson of Mr. Charest’s current leadership campaign, political consultant Tasha Kheiriddin. That has only further fuelled charges that the former Liberal premier of Quebec is not a real Conservative.

Speculation that a new political party could be launched once Mr. Poilievre has officially locked up the leadership is also being stoked by a group that calls itself Centre Ice Conservatives. It is holding a conference in Edmonton next month to provide a platform for political orphans. Ms. Kheiriddin is slated to speak at the event, along with former Liberal British Columbia premier Christy Clark.

The union of the old Progressive-Conservatives and Stephen Harper's Reform Party was never really a marriage. It was a hostile takeover and Red Tories were never welcome in the new party:

It is not for nothing that former PC prime minister Brian Mulroney, who once considered party loyalty sacrosanct, recently said he does not recognize himself in the current Conservative Party. The only alternative left for Red Tories like Mr. Charest, Ms. Kheiriddin and Mr. Peterson is to start anew.

La Presse columnist Yves Boisvert wrote this week that a person close to the Charest campaign had suggested that Mr. Charest might seek to emulate French President Emmanuel Macron, who created his own political party to launch his 2017 bid for the Élysée Palace.

Even if a new centre-right political party were to emerge in the wake of a Poilievre victory on Sept. 10, it is not clear if Mr. Charest, at 64, would be the obvious person to lead it. Mr. Macron was not yet 40 when he founded La République en Marche. And Mr. Charest’s current leadership campaign, while solid and principled, has not exactly caught on with the broader Canadian electorate.

Still, if only to restore some sanity to federal politics, no one should discourage Mr. Charest from trying.

Who knows what will happen? But it was always true that the Reformers were always a fringe. They may choose to be so again.

Email ThisBlogThis!Share to TwitterShare to FacebookShare to Pinterest
Labels: A New Political Party?

There probable is some moderate reform type folks out there but for the most part I think it’s the Rabid Reformers now.
Not only have they chosen to go fringe they are wholeheartedly embracing it. Poilievre, like trump, gets the rabid ones riled up on purpose and of course they need little encouragement. I find them to be an extremely nasty bunch who seem to latch on to all sorts of Qnon type stuff and have little understanding of our parliamentary process or world affairs. I have been saying for a couple years now that the progressive members of the party need to dump the reform contingent, or form a new party.
Lastly, why are they getting Christy f’ing Clarke to speak at their function? What an absolutely horrible politician and a questionable human being. As I’m from BC I don’t see how she can have any advice or wisdom to give that would be of help. The vacuum inside her cranium rivals that of deep space but unlike space there are no wondrous sights there to make up for the complete lack of life.

So what happens if Poilievre is blown out of the water by Secrets revealed, leaked, hacked, unravelled.. that were dormant, slumbering & hissing.. down down down .. his immediate & older whitewashed backtrail ? What then ? Riddle me that !

Wondrous Revelations.. of Secret Squirrel Skippy.. the MultiMillionaire World Champion of Service to Those Low On Freedoms, Long on Flag Waving.. and wearing the Maple Leaf as Caped.. uh.. Truckers or whatnot.. Cuppa Coffee in Every Truck eh !

… can prevent a historic LEAK .. one that goes NUCLEAR.. not merely VIRAL ..

I don't know much about, Clarke, Graham, but she doesn't strike me as a moderate. When placed alongside Poilievre, however, perhaps she is.

It's going to be interesting to see what skeletons fall out of Poilievre's closet, sal.

The Con party has always been a con. Back when Parson Manning first tried to hide Reform behind the unintentionally truthful name CCRAP, PC leader Joe Clark didn't challenge the new party's use of "Conservative" in its official title because he believed voters wouldn't be fooled by the Reform party using a different name. As Clark rightly observed, "This is a party of smoke and mirrors. They're trying to persuade people they're something other than they are, and it just won't wash."

Twenty-two years later, they're still trying to persuade people that they're really not just a party for Bundy-style western separatists and prosperity-gospel Christofascists. Slapping on a coat of Tory blue worked for a while, but the paint's faded and peeled, and the old Reform green's showing through. Time for other options.

Well, Owen, let me tell you what Christy Clark (no e at the end of her name) once said at an oil man's meeting in Texas. When asked how we can compete with Russia to supply oil to China due to the transport distances involved, Clark replied that Russia is a long ways away from China too. In fact. Russia and China share a border. I actually felt embarrassed for her...but only momentarily.

I have a view that likely would be anathema to the CPC, but I really think, beyond the splitting of the right, that a new party would be good for democracy. I have long felt that the extremism represented by the current drift of the CPC will only enable the Liberals by default. Unlike some, I do not see Trudeau et al. as Canada's natural governing party, Owen.

I agree, Cap. This pig can't take any more lipstick.

Sounds like she has the same mental horsepower as Sarah Palin, Gordie.

I've had a feeling for some time that we're in for more political fracturing, Lorne. Parties would have to deal with each other in order to get anything done.

Who knows who could walk out onto the stage, zoombats?

Like Trump Poilievre, offers simplistic solutions to complicated questions.
This is in line with today's voters making decisions from social media or two sentence news reports by the main street media.
Until our attention span increases our knowledge and decision making will suffer.

Palin may not be a Nobel contender but her geography beats Clark's.

I did a quick check a few days ago on Palin's notorious "see Russia" statement and apparently what she actually said (quick paraphrase) " We can see Russia from an island in Alaska'. Given that the strait between Russia (Big Diomede Island) and the USA (Diomede Island) is about 3.5km wide she probably was right---barring fog. The Russian Federation is the USA's closest non-contiguous neighour.

Clark is closer to Liz Truss---Rostov-on-Don is in Russia?---or that brilliant US senator, I forget his name, who suggested that the US navy should blockade Krasnoyarsk, which is only ~3,000km inland.

Unfortunately, TB, I don't hold out a lot of hope for increased attention spans.

I took Palin at her word about Russia, jrk. But everything else that came out of her mouth was hot air.

Amazing who we vote into high places , isn't it?
That any of them receive such high praise especially when they are dead is unfathomable.

Barbara Tuchman called it the March of Folly, TB.