Living Next To An Elephant 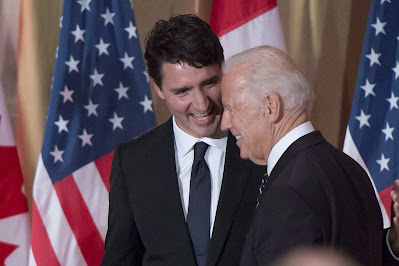 In a surprising turn of events this week, West Virginia Senator Joe Manchin reached a deal with Chuck Schumer to support most of Joe Biden's agenda -- particularly his proposals on climate change. And there was a surprise within the surprise. When it comes to electric vehicles, Biden's focus has gone from Buy American to Buy North American. Susan Delacourt writes:

This is no small thing in the Canada-U.S. relationship. It is no small thing either to the Canadian auto industry, which feared that giving Americans incentives to buy electric vehicles made solely in the U.S. would have spelled disaster for Canadian car manufacturers.

It was exactly what Canada had been seeking, through an intense lobbying effort at all levels in the United States — very similar to the lobbying that took place to save the North American Free Trade Agreement when Donald Trump was threatening it a few years ago.

“Relentless” was how Canada’s ambassador to the United States, Kirsten Hillman, described her team’s efforts to fight the buy-American provision in her celebratory statement on the compromise. “Non-stop” was how International Trade Minister Mary Ng described the advocacy, in an interview on Thursday.

The sheer number of meetings and interventions on this issue by the Canadian government are almost impossible to count.

Delacourt writes about one particular meeting:

One significant meeting, in the eyes of the Canadians, at least, took place last November when Trudeau arrived in Washington to meet with President Joe Biden. The night before Trudeau and Biden were due to meet, Canada decided to hold a reception and invite only the most senior members of the Biden White House. It was a risk, especially if they didn’t show up, but Canada calculated that if this country was going to do a full-out lobbying effort against the tax credit, it had to be focused on senior people around Biden.

The reception was held outdoors at Hillman’s official residence in Washington, to be respectful of strict COVID-19 protocols. Canadians and Americans could warm their hands over outdoor fires. Among the attendees were John Kerry, the president’s special adviser on climate; Transportation Secretary Pete Buttigieg and Energy Secretary Jennifer Granholm.

Apparently, the message got through. When Biden met Trudeau the next day, one of the first things he mentioned was how clear — possibly annoyingly clear — the Canadians had been about the electric-vehicle tax credit the night before.

It's not easy living next to an elephant. You have to calculate your every move. But it can be done.

Well! Something good for a little change. Where does this lead? Anyong

That's how governments should deal with each other, Anyong.

It really is refreshing when people can act responsibly and considerate of others. One is almost shocked at people being "diplomatic"and agreeing to pursue mutually beneficial action. We are after all North Americans and neighbours. Could you imagine how it would have gone with the orange oaf?

The Great Orange Oaf views everything as a zero-sum game, zoombats. There is no such thing as a win-win. For him there's only one winner -- and it can only be him.

I'll print your comment if you initial it, Anon.