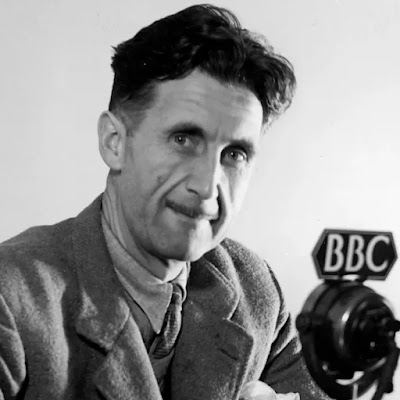 Bob Rae writes that these days he has turned once again to the works of George Orwell to understand what is happening:

I began reading the works of George Orwell in my early teens, starting with the allegorical novella Animal Farm and the dystopian science fiction of 1984. I was hooked, and bought every red Penguin paperback edition of Orwell I could find. I have been reading his works, and reading about him, ever since.

Working at the United Nations has me thinking of Orwell and his observations more frequently these days, (I took note of what would have been his 119th birthday in late June). The UN at its best can be an institution that serves the greater good, but it has also, especially in recent months, been a place where words are twisted and lies abound. As certain state actors attempt to rewrite history and facts are turned on their heads, I often look to Orwell for guidance and wisdom.

Russian President Vladimir Putin’s ongoing “special military operation” to “destroy Nazism” by attempting to annex eastern Ukraine is a case in point. At the UN we’ve also become accustomed to constant attempts by the Chinese government to insert President Xi Jinping’s thoughts into official resolutions, compromising and qualifying commitments to human rights, democracy and the rule of law by making them subject to the “spirit” of the “equality of nations” and “mutual respect.” (Translation: Stay out of our business).

When it came to disinformation and its corrosive effects, Orwell knew his stuff:

In 1946, Orwell wrote: “We are all capable of believing things which we know to be untrue, and then, when we are finally proved wrong, impudently twisting the facts so as to show we were right. Intellectually, it is possible to carry on this process for an indefinite time: The only check on it is that sooner or later, a false belief bumps up against a solid reality, usually on a battlefield.”

The limits of what is now called “confirmation bias” were never so well described.

Orwell’s writings put him at odds with the prevailing political correctness of his time. He warned of the dangers of the growing reality of totalitarianism, with his instinct proven correct in the decades that followed. In the macabre alliance of the Soviets and the Nazis in the Molotov-Ribbentrop non-aggression pact in 1939, he saw a display of contempt for the spirit of democracy. The prevailing themes of Orwell’s best-known works reflect his deep anger over the presence of tyranny all around him – lies and deceit, propaganda and mass surveillance, the rewriting of history, the curbing of personal freedoms; themes that still resonate today, often in terrifying ways.

In the darkness, though, Orwell still found faith in humanity. In one of his poems, he described an encounter with a fellow soldier in Spain: “But the thing that I saw in your face/ No power can disinherit./ No bomb that ever burst/ Shatters the crystal spirit.”

These days I'm bewildered by everything that is happening. We live in very dark times. Orwell looked unflinchingly into the darkness and was not overwhelmed by it.

Rae is an articulate politician who lost his way, long ago, and became part of the very Orwellian snafu he decries.

Also the sheer bleakness of much of what Orwell presents has a background of pleasure and joy, hightlighted in Rebecca Solnit's Orwell's Roses. She is adept at reinforcing the dark nature of our current Orwellian situation, but also at exhorting us not to forget the beauty and love that serves as a counterpoint to a deep understanding of society's misdirection and chaotic upset. The book is a fine way to revisit thoughts on Orwell and events both past and contemporaneous. Also consider Malraux's Man's Fate and Man's Hope, takes on China and Spain in the '30s.

One finds meaning in darkness by looking for light, Danneau.

That's a bit harsh, PoV. Rae made mistakes -- which he acknowledges. On the other hand, he has remained true to certain core principles.

Orwell said, "Intellectual honesty is a crime in any totalitarian country, but even in England it is not exactly profitable to speak and write the truth." This applies, of course, to much of what passes for news here in Canada, too. Critical reading is an important skill. Unfortunately, it's difficult to practice consistently.

That's because critical thinking can be painful, Cap. It demands that we acknowledge inconsistencies that we hold dear.

.. Off Topic & On Topic - a new & interesting ‘reading challenge’ for me

This comment is more about the ‘physical, mental & social mechanics’ of my recent reading & what it might mean, Owen.
An average day’s reading for me (when unemployed) may be essentially 10-12 hours. The ‘reading’ categories may be mixed, entwined, even random.

I start at approx 4-4:30 AM.. visiting Progressive Bloggers, browsing the various titles/authors. I will return later, mid or late morning & again sometime in the evening. That may include submitting a comment, or re-reading one or several. I may post a link to one of them via Twitter or Facebook in the process.

Now, consider that I may be of ‘different mind’ when I do those return visits, possibly just to catch up on the growing comments regarding a topical blog ‘essay’. Why ? By 2:00 PM I’ve seen mebbe 1,000 Tweets. Confirming, questioning, outraged, sad, happy Tweets. I may have been very briefly side tracked by a funny video clip or disastrous news, a mass murder or a cute puppy, a plea for donations, an alarming update on Covid, or one of the never ceasing daily ‘Polls’ (which I consider insidious Vote Suppression 101 Propaganda)

I may have read or reread 2 or more chapters of Fiction or Fact by then, glanced through my pile of books, caught up on Sports news, More Twitter, more news re Canadian political failures (there’s never any successes)

Here’s where it gets interesting.. I now realize when reading a crucial book, such as The Premonition - A Covid Story - by Michael Lewis or revisiting The Upside Of Down - Thomas Homer Dixon or a totally fascinating 1st novel such as The Silence Of Bonaventure Arrow or revisiting Neuromancer .. that I am having trouble ‘reading & tracking’ said book’s Characters, Themes, Focus ie the thread & flow of the book & writing.. ie what it is adding up to - for me !

By 8 or 9 PM.. I have probably myself ‘been writing’ - whether Tweets (i have posted some 75,000 tweets) quick notes celebrating birthdays on Facebook etc etc, may have sketched in another of my ‘Memoir Stylings’, and/or edited several (I have almost 300 of them) I may also have posted 1-2 of my latest photographs or an old fave related to someone else’s comment or question. someone may inquire re Monarch Butterflies (i has photos) or someone curious about my harsh comments re Poilievre (i has links & screen grabs)

Bottom line these days is - I may run ‘hard aground’ suddenly when just reading a book, hard cover or paperback. This when I suddenly realize I am speed scanning.. or losing focus, losing track.. wasting fine writing by being sloppy.. letting tricky Bad reading Habits creep in. It’s like my ‘reading powers’ are diminished.

I finally have noted & admitted to this. My solution is to park the book, return later & back up to the chapter(s) or section where I lost my absorption & retention. As an orphan & a bit of a strange young kid with surprising reading & latent visual skills, much of my fundamental character was shaped & nourished by reading.. and by National Geographic, or Sports Illustrated, Aviation Weekly & Space Technology magazine, Harrowsmith, Mad Magazine (haha !) I may have read part of a page of the Holy Bible in my entire life btw.

Perhaps ‘it’s not all me’ - Is the Internet & Social Media crowding my thinking & cognition, my focus. Have I truly become as McLuhan predicted.. “an artist manning the outposts of Culture & Technology” - a ‘Generalist’ ?

in summary.. I am currently installing a new ‘tool’ - the tool reminds me as I flit like a butterfly.. to ask myself ‘Are you ready to read ?’ Am I going to read usefully.. or just service a fading talent & accept poor or sloppy reading habits ?’

my eyes & brain will be clearly physically fading by 9ish tonight - will sleep like a rock.. try again tomorrow - the salamander

McLuhan realized that the medium had become more important than the message, sal -- something we have forgotten. He knew that "the media" controlled our access to information -- and that some mediums were simply exhausting.