They Now Own The Conservative Party 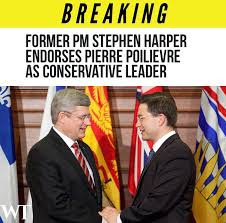 After all, who knows more about winning elections than Stephen Harper: the leader who took a certain Conservative victory in 2004 – the year of the sponsorship scandal – and turned it into a Liberal minority; who in 2006 turned a certain Conservative majority into a Conservative minority; who eked out another minority in 2008 against the historically inept Stéphane Dion; and who, after finally winning a potentially realigning majority in 2011 threw it away over the next four years.

At the end of which – after nearly 10 years in power – he departed with next to nothing in the way of a policy footprint: at least, of a conservative policy footprint. The Harper Conservatives jettisoned every principle that he or they had ever stood for, from democratic accountability to a strong defence to balanced budgets to free markets. And they still won but a single majority in five attempts. They sold their souls, and got nothing in return; swung for the lowest common denominator, and missed. All that remains of Mr. Harper’s legacy, the sole basis for his reputation as an unbending conservative, is his scowl: a petulant Cheshire cat.

So Mr. Harper’s endorsement of Mr. Poilievre is a big deal, especially among those who think Mr. Harper’s example is to be emulated or his judgment is to be trusted. Still, the supposition, apparently widespread, that the most unpopular minister in a deeply unpopular government has now become an unstoppable political phenomenon, based solely on his ability to turn out the anti-vaccine vote, seems to have emerged from the same strange universe in which Mr. Harper is a master strategist and principled conservative.

The vast majority seem to have been attracted by Mr. Poilievre’s message – that the government, in league with the Bank of Canada and the World Economic Forum, is watching your every move, and is preparing still greater terrors to come – there is ample reason to doubt it. The party has not expanded its appeal to a broader section of the electorate. It has simply burrowed deeper into a narrow and highly excitable vein of it.

Coyne doesn't mince his words. What Poilievre's ascension shows is that the Conservative Party has

engineered its own takeover by a fringe movement. The convoy supporters and single-issue zealots to whom Mr. Poilievre has successfully marketed himself may be sufficient in number to overwhelm a three-time-loser opposition party, but it is far from clear they offer the kind of base from which to take the country. That’s borne out by recent polling from Angus Reid, among others. Mr. Poilievre does better than his more mainstream rival, Jean Charest, among Conservative and People’s Party voters. He does worse among centrist and Liberal voters: increasingly up for grabs, amid rising discontent with the government, and crucial to the party’s hopes of winning a majority.

Loonies took over the Republican Party a decade ago. They now control the Conservative Party of Canada.

Email ThisBlogThis!Share to TwitterShare to FacebookShare to Pinterest
Labels: Harper's Endorsement Of Poilievre

Here's hoping Coyne has this 'right', eh? Freeland is a terrible campaigner.

If it's Freedland vs Lil'PP vs the ghost-of-Jack (or some equally popular charlatan) it could be 2011 all over again.

PP pawliver has a strategy with the anti-vaxers I'm sure.
Covid dulls the senses of smell and taste
In this way cons around here can vote for him
Without having to be undignified by holding their nose.
In my area
19 out of 20 political comments start with dissing Trudeau
My standard comment has become
I hate Trudeau as much as the next guy
but time after time
You want me to trade down
Harper. Scheer. O'Toole. Some insurrectionist truckers and now this abomination.
Fun Times.

I couldn’t agree with Mr. Coyne more. He says it much better than I with a far better use of language than myself but pretty much this is what I have been saying. I think things may get worse for awhile, especially if, IF, pp wins the leadership AND then the next election. If that happens hopefully, as with harper, it’s enough for people to see and to wake up to the fact this reform run party doesn’t represent the conservatives and certainly doesn’t reflect Canadian values.

I always had the impression that Harper was 'in it' to effect social change in matters such as religion and sexual persuasion.
He arrived on the scene with a bible hidden in one pocket and a cross in the other.
How soon will it be before Poilievre starts praising the Lord as he looks for votes?

I suspect that most Canadians don't want to go back to 2011, PoV.

There will be no fun for anyone, lungta, if Poilievre becomes the next leader of the Conservative Party.

That's really the point, Graham. The so-called Conservative Party is not conservative at all.

I suspect that Poilievre has the support of Bible thumpers, TB -- even when he doesn't ask for their support.

The Con MO hasn't changed since the Harper years. Stir up enough fear and hatred among Canadians to get elected, then cut taxes and regulations for your wealthy patrons and privatize chunks of government for them.

Harper sees Poilievre as the only one with any talent for this, and he's probably right. It's a sabotage mission, that's why there's never any talk about important issues like climate change, inequality and healthcare.

I'll publish your comment, Anon, if you initial it.

🦎.. an aside.. re PawLiver.. (love that spelling !)
I’ve spotted a reality that Zero Mainstream Media comment on.. probably because I have a track record of connecting ‘disparate facts’ with fair success. In Farm Life, this is a developed & necessary skill - as it is in Media

As a freelance photographer, darkroom & PhotoShop expert I ‘look’ at photos, images.. as a web surfer it’s also just an automatic, unconscious habit.. but I can & will recall those impressions when another impulse strikes me..

I was exposed to photos of ‘massive crowds’ (David Akin) at Poilievre rallies across Canada. I have seen photos of almost all the rallies.. that’s natural.. because the Campaign in ensuring we see ‘the massive crowds. It’s child’s play for me to estimate visually the scale & size of School gyms, auditoriums etc.. where such events are held. Next it’s child’s play to divide crowds in photos & count heads. To cut to the chase, indeed, some crowds are ‘massive’ some are 250 peeps, some have 500 or 1,500 or 5,000.. amen, one they claim was 10,000 !

But this photog picks up when one that I count is a person of colour.. why would that be ? Because any person of colour at a Poilievre rally jumps out at me while counting.. Some rallies have ZERO, some have 2, some have one placed for background of Video Camera shots !

Why is this ? Again, disparate factoids. Jenni Byrne ! Eureka ! Who else has a digital rolodex with the Contact Info of EVERY CHAIR OF THE EDA (Electoral District Associations) Board of Directors ? Across Canada. Would dear Jenni not utilize, indeed plan to ‘Get Out The Crowds’ via Conservative Riding Associations, DEDICATED to ensuring only Evangelical Candidates are nominated to run for MP ? Did anyone see posters at street level re ‘UPCOMING RALLY !’ No.. TV or Newspaper ads ? No.. so why did the fans come ?

The Rallies are planned & designed to optimize Media Coverage - News - & one would think Mainstream Journalists would twig to this.. BUT.. What if the Majority of Mainstream Media in Canada is Foreign Controlled by Conservative Vested Interests ? And won’t venture into such stuff. All they want anyway.. is Whipped Conservative MP’s.. ideally forming Majority Government

Think on that Owen .. and if that is just the tip of the iceberg we are seeing.. it’s no wonder the phenomena of Poilievre, Jordan Peterson, Jason Kenney, Rex Murphy, NewsTalk 1010, Brian Lilley / Sun / Breaking News blah blah should be seen as the penultimate signpost of ‘captured Democracy’ and the Modern coup d’état - ‘capture the Media & the Palace is Yours’

You have to give Poilievre credit for at least one thing, sal. He's a master manipulator of social media. For me, that's a huge caveat emptor.

Sabotage, indeed, Cap. In the end, that's the goal -- sabotage the system.