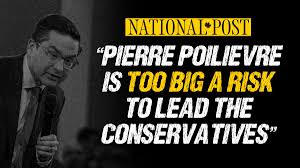 It appears, Tom Walkom writes, that the Conservative Party has lost its mind:

Conservatives, it seems, are no longer content with those who promise them good and limited government — they want more. That more can take many forms. It can be a fascination with conspiracy theories. It can be an enchantment with cryptocurrency. It may have no connection with what most people would view as traditional conservative economic policy.

Whatever happened to the old “sensible shoes” party known as the Conservatives?

As Pierre Poilievre, a radical populist, prepares to become the party’s new leader, it’s a question that has taken on new urgency.

Poilievre was already the odds-on favourite for winning his party’s leadership in a race that concludes next month. But his candidacy received a new boost this week, when he won the endorsement of former prime minister Stephen Harper.

Not all of Harper's ministers agree with their former boss:

In particular, they took issue with Poilievre’s unorthodox approach to monetary policy — he would fire the governor of the Bank of Canada, and give more weight to cryptocurrencies.

Cannon and Kent both support Jean Charest in the Conservative leadership race. In a more normal time, that would have counted for much. In these times, however, it seems Conservatives care little for the real track record of those who would lead them, and more for their adherence to the rules of trendiness.

Email ThisBlogThis!Share to TwitterShare to FacebookShare to Pinterest
Labels: The Conservative Leadership Campaign 2022

Is Skippy promising to hike taxes on the rich, bring in pharmacare, reduce obscene mobile phone prices and seriously address climate change? Poling shows
these policies have broad popular support and you'd expect a "radical populist" to be promising at least some of them.

But Skippy is no populist, he's an authoritarian leader, who speaks for the 20% to 25% of the population that wants authoritarian rule. It's time the media dropped the word "populist" as a euphemism for "authoritarian" or "fascist."

I'll publish your comment, Anon, if you initial it.