Off The Radar Screen 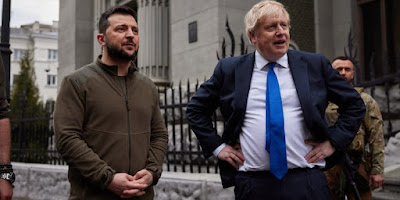 Michael Harris writes that The West is forgetting about Ukraine. It's off our radar screens -- a victim of our short attention spans. Consider what has happened in the United States -- the chief ally of the Ukrainians:

Nearly four months into the war, Ukraine no longer routinely leads the nightly news. On the crowded clothesline of the U.S. media, other stories have captured the public’s attention.

Americans now aim their outrage at gasoline prices, over five bucks a gallon to see the U.S.A. in your Chevrolet.

Uvalde, Texas, showed that Ukraine doesn’t have the monopoly on atrocities, as 19 fourth graders gunned down along with two teachers in a school.

Then there is the national melodrama playing out on television screens across the country, as congressional investigators lay bare just how ruthlessly the Trump White House tried to hold on to power after losing the 2020 election. It’s sedition by any other name, and judging by the recent testimony of White House aide Cassidy Hutchinson, an unhinged president.

And now the U.S. Supreme Court with Conservative judges put there by Trump has plunged the country into chaos by overturning Rowe vs. Wade, stripping millions of American women of their legal right to a safe and accessible abortion.

Yes, European leaders like Boris Johnson and Olaf Scholz occasionally make the trip to Kyiv for the obligatory photo op with him.  And yes, NATO and the G-7 still have the rhetoric right.

But the political winds are shifting. Some reports have characterized that change as “fatigue” with the war in certain quarters. Some people want the war to end, raising the question; is it Ukraine they are thinking about, or the prospect of a European winter without Russian gas and oil?

There is talk in the American military of withdrawing from Ukraine:

There have already been reports that some members of the military think it is highly unlikely that Ukraine will ever be able to recover territory lost to the Russians in the Donbas. Together with the view that the war must end, it is not hard to imagine that the day may soon come when President Zelensky will be pressured to agree to a peace that would cede Ukrainian territory to the Russian invaders.

When I taught school, ADD -- Attention Deficit Disorder -- was deemed a "Learning Disability." Students with ADD could not concentrate long enough to learn something. Now ADD is no longer an individual issue. It's a societal issue.

It seems we can no longer focus on a problem long enough to fix it.

Email ThisBlogThis!Share to TwitterShare to FacebookShare to Pinterest
Labels: Forgetting About Ukraine

This isn’t anything new! We in the West and mostly Americans, have been doing this for years. ADD is every where. Anyong

When you are losing a proxy war then it is prudent to exit that conflict.

NATO's tin soldiers lost a 20 year war against the Taliban, they are no match for Russia, fighting an existential battle on its borders.

Not a good record, PoV.

Full of sound and fury, Anyong, signifying nothing.

The US seems to keep having distractions. A friend was remarking to me this morning that the rate of mass shootings seems to be increasing there.

And it may be spreading. I did not like hearing about that shooting in Denmark yesterday.

Insanity is a social disease, jrk.

The reason the ukraine is off my radar screen ...
There is no moral high ground
take Zelensky
2016 tv comedian playing a piano naked with no hands on tv ... no net worth
2019 played comedy role of ukraine president on tv for 3 years ... net worth 1.5 million
2022 4 years of being in position of ukrainiane president ... estimated net worth 850 million
The war will make him a multibillionaire
Please give to the ukraine.
Watch the movie "Hatred"
The movies background is the slaughter of 80 - 100 thousand poles by the Ukrainians because ...land.

Unfortunately, lungta, most of the victims of war are the innocent.