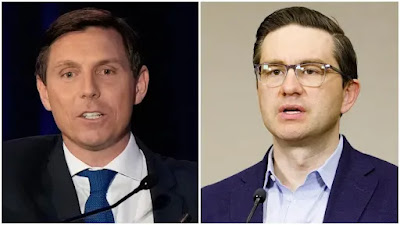 Althia Raj writes that there are several theories circulating about why Patrick Brown was booted out of the Conservative leadership race:

“Based on the single, untested word of a longtime party operative, Brown was given the heave-ho,” wrote Mulcair, who was a Charest cabinet minister in Quebec’s National Assembly.

The party, based on an undisclosed number of allegations and complaints — whose nature is also shrouded in secrecy — chose to remove an approved candidate, who’d spent $300,000 to enter the race and may have raised about $2.25 million for the party (the cost of a one-year membership multiplied by the 150,000 memberships Brown claimed he sold), without, it appears, fully investigating the matter itself.

Ian Brodie, the chair of the Election Organizing Committee claims that Brown broke "sections 363 and 367, which prevent anyone other than an individual from donating to a leadership candidate and caps donations at $1,675."

But the act also says that if a leadership contestant receives a contribution from an ineligible contributor, they can return it to the contributor or pay the amount of it to the chief electoral officer within 30 days after becoming aware of the ineligibility. Brown’s campaign said it was prepared to do this. On Friday, it said it repaid $7,410.83 to the company that hired Jodoin and informed Elections Canada of the payment. The agency, however, said it had no such information.

In an email to members, Brodie said the Brown campaign was informed on June 29 of the allegations against it. On June 30, the party asked for a detailed and complete response. The Brown campaign provided a response on July 1 that Brodie wrote was unsatisfactory.

They continued to talk between July 2 and 5, in what Brodie described as an attempt to “find a path for the Patrick Brown campaign to be in compliance with our rules and federal law.” Later that day, most of LEOC’s 20 appointees decided to disqualify Brown by a vote of 11 to six.

Brodie praised them for doing “the right thing” to protect the “long-term interests” of the party. “LEOC could not afford the risk of having a leadership candidate under the investigation of Elections Canada for breaking federal law.”

Because the party referred the matter to the commissioner of Elections Canada, it says it can’t answer detailed questions about the allegations.

Brodie is a long-time ally of Stephen Harper, who said at the beginning of the race that he wanted a "true Conservative" to win. The suspicion is that Brown was not true enough for Stephen Haper.

Email ThisBlogThis!Share to TwitterShare to FacebookShare to Pinterest
Labels: The Demise Of Patrick Brown

So much for open honest and open decisions in deciding a leader of the Conservative Party. The system these people use to decide who runs and who does not is as corrupt as corruption gets. Anyong

It's like the Wizard of Oz, Anyong. You have to find the man behind the curtain.

Con leadership races have always been like Thunderdome: "Two men enter, one man leave!" Cheating, lying, backstabbing are all allowed, it's a contest to find the meanest SOB. They then treat the general election the same way, resulting in Harper's Cons becoming the only party in the Commonwealth convicted of electoral fraud. Party of law 'n' order my ass!

The rule is the meanest guy will win, Cap. That's what "true Conservative" means.

Say what ! !
Is it all scripted, choreographed & staged like WWF ?

The WWF reference is not far off the mark, sal.