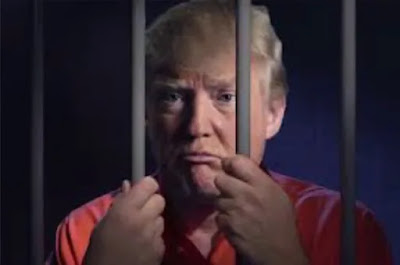 Yesterday, I stumbled across an article in The Atlantic titled "What Donald Trump Got Out Of His Divorce From Ivana." The New York City tabloids were full of salacious details. If there's one thing Trump produces, it's salacious details. Molly Jong-Fast writes:

Donald gave away a lot in the divorce—precipitated, after all, by his highly publicized affair with Marla Maples. Ivana’s divorce lawyer was Michael Kennedy, a crusading attorney (and friend of my parents) known for representing members of the Weather Underground and the United Farm Workers. With his help, Ivana got: $14 million for herself; $650,000 a year in alimony and child support to raise Donald Jr., Ivanka, and Eric; a mansion in Greenwich, Connecticut; and an apartment on the Upper East Side.

But what Donald got from the divorce from Ivana was a realization that making a shameless spectacle of yourself could be boffo. As his biographer, the journalist Tim O’Brien, told me: “The lesson Trump drew from it was that he could endure a grotesque personal debacle, which he set in motion by his cheating on Ivana, and come out the other side even more an object of interest than he was before.”

The headlines that the divorce generated made the gauche Trump brand gold-plated. The spectacle of their marital disintegration was a kind of lurid but victimless crime, involving two people who fed off the media attention while dragging each other through Page Six. “The Trumps were just another bloated float in the ’80s parade of showy New York money-grubbers,” Tina Brown’s successor as Vanity Fair editor, Graydon Carter, told me. “Their divorce—fought more in the pages of the Post and the News than in the courts—elevated them to grand-marshal status.”

But there were others who saw more than that:

“I’ve never known anybody who is as dependent on attention as he is,” the writer Kurt Andersen told me. “But to me, it is in his case a jones like I’ve never seen. His obsession with fame is truly pathological. It’s not figurative; it’s not a metaphoric addiction. He had a real addiction.” Andersen, along with Carter, was a co-founder of the satirical magazine Spy, which famously traded on mocking Donald. But it was a two-way trade.

Anderson says that Trump is addicted to fame. That's an important insight. For Trump, attaining the presidency was the ultimate high. And losing it is the ultimate bad trip. It explains why he worked so hard to undermine the election -- and why he refuses to let the presidency go.

There is no rehabilitation for Trump's addiction. The only antidote is to institutionalize him -- behind bars.

I don’t believe Donald Trump will ever see prison..
I never believed Jeffrey Epstein would be convicted either ..
I don’t believe Pierre Poilievre will ever be Prime Minister..
I do believe Alex Jones will be justly, criminally convicted 🦎

It's possible that Trump will avoid prison, sal. He's done it so far.

The emptier the soul, the greater the need to fill the void, Owen. It is no doubt a Sisyphean task.

Like Conrad's Mr. Kurtz, Lorne, Trump is a weapon of mass destruction.

Lock him up! Ironically, if that were to happen it would ensure his fame as the first jailed president.

My hunch is that Al Capone would tell Trump that fame, while you're behind bars, can't compete with the good old days, Cap.