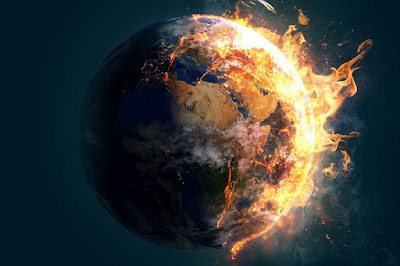 On Saturday, we lost power here for nine hours. There was an explosion and fire at an Ontario Hydro station up the road on a very hot day. There will be more such incidents in our future. Michael Harris writes:

While politicians obsess about inflation and the next electoral cycle, the planet is stewing in its own juices. Triple-digit temperatures in the United States and Europe are killing people because they don’t have air-conditioning, or they can’t reach a “cooling centre.”

Just one per cent of Europeans have air conditioning. And even though the U.S. is what author Henry Miller once called “the air-conditioned nightmare,” American authorities are predicting massive power outages across the U.S. this summer due to increased demand.

The power outages are reminders that we don't have the infrastructure we need to deal with climate change:

The so-called advanced societies don’t have the infrastructure to deal with deadly heat waves. With London surrounded by a ring of grass fires, the government has ordered people to shelter in place—a nice trick if the house is on fire. British firefighters say that this is the busiest they have been since the bombing of London in World War II. An apt observation. Unchecked, climate change will be World War II to the power of 10.

The situation is almost unforgivable when it comes to how political leaders have been caught with their pants down on climate change.

That’s because there has been no shortage of scientific Cassandras raising the alarm about what will happen to the dear, dirty planet if we dither on reducing CO2 emissions. The UN climate panel has repeatedly warned that the point of no return for the planet is a heartbeat away in historical time: less than 10 years. Even the U.S. military has defined global warming as the highest threat of all. China, they say, may be the geopolitical threat of this century, assuming we’re still around to deal with it. But the existential threat is climate change. Take it from the generals.

In politics, though, science gets only a tip of the hat when it gets in the way of the economy. Political leaders around the world have been tipping their hats to science for years, then ignoring it in everything but their speeches.

The Liberals claim they're tuned into the problem. But they refuse to act:

How could they believe in climate action and then green light the gigantic Bay du Nord oil project? Nor have they yet been able to meet any of the aspirational emission targets they have set.

The Conservatives don't see the problem:

When in power, the Harper government wouldn’t even agree to regulate the energy sector, let alone take proactive steps to reduce carbon emissions. Their position on carbon tax has turned them into a political flat-Earth society, with more of the same on the way if Pierre “Stephen” Poilievre becomes the new leader.

The story is the same in the U.S. President Joe Biden talked a good climate action plan, but then slinked off to Saudi Arabia to beg for more gas from a tyrannical state he once vowed to turn into a pariah. But the president didn’t get any gas, he just gave Saudi Prince Mohamed bin Salman a chance to publicly wipe a little of Jamal Khasoggi’s blood off his hands in a fist pump with the U.S. president; so much for U.S. moral authority in the world. A world-class disgrace by the president who is sitting at 31 per cent approval rating in the United States.

And we the people have been asleep:

Climate change has been pushed to the back of the agenda as though it were just another pain-in-the-ass issue in a world suddenly filled with unpleasant truths.  Enter the ostrich reflex. Instead of holding politicians’ feet to the fire on real climate action,  most of the public obsesses about the price of gas, the first pick in the NHL draft, the quality of the Governor General’s French, or who’s on the cover of Vanity Fair.

Harris writes that Nero fiddled while Rome burned: "It didn’t work then, and it won’t work now."

There are more last Saturdays in our future.

Email ThisBlogThis!Share to TwitterShare to FacebookShare to Pinterest
Labels: Harris On Climate Change

A potent post, Owen, one that makes clear we have no more get-out-of-jail-free cards left.

There's no wiggle room left, Lorne. Like the little boys in Lord of the Flies, we're burning down the island.

If our power plants are blowing up now, imagine what's going to happen after more people switch to EVs. Currently, most people's overnight power use amounts to running the AC/furnace, the fridge and charging some phones. Charging an EV will about double that power draw, triple in the case of two-car families.

I've yet to hear about all the upgrades we're doing to handle this anticipated new load. Like just about everything to do with global warming, pretending that we don't need to change is easier than taking action today.

We should have taken action yesterday, Cap. We're our own worst enemies.

I have stopped accepting guilt for the mess we are in. As noted above, there have been abundant warnings. Somehow our political system has been corrupted to the point that it no longer matters who sits in which chairs. Our political class does not exist for our benefit and will do nothing to stop this juggernaut.

Those whose interest is the continued use of fossil fuels have got the government they paid for, Toby.

Most people really don't understand climate warming since most of us are science illiterates, including me. But I am updating the little science I remember from high school with online courses. It's a tough slog.

A lot of people think a warmer climate will be rather pleasant. Thinking done, change the subject. Science is boring.

We are really in the infancy of modern science and popular culture has not kept up. Most people would really be much more comfortable in a prescience world, so much cozier and people centered.

The culture needs to change fast but I don't see it happening. Until then all this verbiage about global warming might as well be proclaimed in ancient Sumerian. Politicians will react to this lack of interest as they do now.

All true, ffd. But, as always, ignorance comes at a terrible cost.

What, I thought ignorance is bliss!
But bliss takes a hike when shit hits the fan, as, metaphorically speaking, it will. Our problem will be the collapse of society, after which will be a living hell for a lot of us. Denace the Mennis.

Most people really don't understand climate warming since most of us are science illiterates, including me.

Well,I am pretty much a science illiterate too but I do understand simple messages such as:
Climate change will kill you, your family, and the family cat.

I think we need to keep the message fairly simple. :)

Unfortunately, that's what will happen, Dennis.

From a recent Monbiot column:

"Can we talk about it now? I mean the subject most of the media and most of the political class has been avoiding for so long. You know, the only subject that ultimately counts – the survival of life on Earth. Everyone knows, however carefully they avoid the topic, that, beside it, all the topics filling the front pages and obsessing the pundits are dust. Even the Times editors still publishing columns denying climate science know it. Even the candidates for the Tory leadership, ignoring or downplaying the issue, know it. Never has a silence been so loud or so resonant.We have seen nothing yet. The dangerous heat England is suffering at the moment is already becoming normal in southern Europe, and would be counted among the cooler days during hot periods in parts of the Middle East, Africa and South Asia, where heat is becoming a regular threat to life. It cannot now be long, unless immediate and comprehensive measures are taken, before these days of rage become the norm even in our once-temperate climatic zone.

Silence becomes consent, Mound. We are consenting to our own destruction.

Somewhere along the line, they've been miseducated, Anyong.