They're Focused On Trump 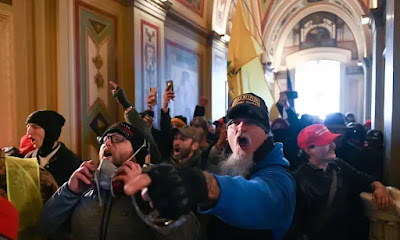 After yesterday's hearings, it's now clear that the January 6 Committee is focused on Donald Trump. Eugene Robinson writes:

It was Donald Trump, and Donald Trump alone, who summoned and loosed the mob that sacked the Capitol, threatened Congress and the vice president and imperiled our democracy. That is the powerful message that emerged from Tuesday’s televised hearing of the Jan. 6 select committee. And these hearings make clear just how dangerous it would be for the former president to be elected again.

On the night of December 18th, a cast of crazies met with Trump at the White House:

Witnesses told the committee, Trump presided over a rancorous, hours-long screaming match between the Crazy and Normal camps that ended after midnight with no real resolution. At 1:42 a.m. that night, Trump embarked on a third, radically different course of action: He posted the infamous tweet telling supporters to come to Washington on Jan. 6, ending it with what MAGA extremists understood as a call to arms: “Be there, will be wild!”

A former member of the Oath Keepers militia group and a onetime sympathizer who joined the Capitol mob told the committee what happened next. Trump’s Jan. 6 tweets galvanized not just random MAGA acolytes but also more-established violent groups. And some leaders of the insurrection somehow learned in advance that Trump would call on the crowd to march on the Capitol.

There are still dots left for the committee to connect. But the emerging picture is of one man who made the horrific events of Jan. 6 happen. His name is Donald Trump. Trump can’t be let anywhere near power again, now that we know exactly how he will use it.

It's true that Trump isn't very bright. But his most singular talent is that he can summon the worst in and of humanity. And the carnage he can inflict -- with the help of his followers -- is horrifying.

That the GOP continues to defend Trump, conceal and justify his acts shows that the larger problem lies with the party. Everyone involved with Jan 6 needs to be criminally charged, whether they're the president, a Supreme Court justice or a shlub wearing a MAGA shirt and wielding a flagpole. The US won't avoid fascism without it.

I agree, Cap. The larger problem is Trump's enablers. Even if he goes to prison, the Trump Mob -- in its largest sense -- won't go away.

The DEMs are focused on tRump instead of ending foreign wars and defending rights at home and dealing with the economy and eco-crisis...

(ex: Biden's milquetoast abortion pushback came two weeks after the law dropped, even though they had two months to get ready.)

My version of 'both sides':

There's a lot going on in the world, PoV. But, if the Americans don't deal with Trump, they're doomed.

Without indicting Trump, Americans are sleepwalking into electoral disaster, which could begin just a few short months from now with the November midterms. Effectively then, the Biden presidency is over. Whether it's trump himself, or some of the wannabes out there, his brand of grievance politics has polluted the political spectrum for years to come, and we could be in for our own dose of it in 2025. BC Waterboy

The disease that spawned Trump is alive and well in the Conservative Party of Canada, waterboy.