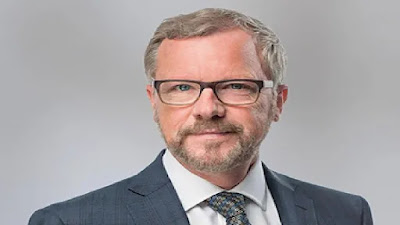 CTV News reports that former Saskatchewan premier Brad Wall was in contact with one of the organizers of the Truckers' Convey:

Former Saskatchewan premier Brad Wall was in contact with a key organizer of the Freedom Convoy anti-mandate protest, providing strategic advice before and after the Ottawa occupation began.

“Your group will likely be provoked by counter protesters and it is so important that they don't take the bait,” Wall said in a text message he sent Saskatchewan truck driver Chris Barber on February 2, according to court records.

“Also it is really important that any of those who are trying to hitch their wagon to this convoy with ulterior motives and off messages - especially racist stuff be openly and roundly condemned by the organizers.”

Wall cited as an example another protest organizer who was later criminally charged, Pat King, who commented in a Facebook video about Anglo Saxon replacement theory.

Email ThisBlogThis!Share to TwitterShare to FacebookShare to Pinterest
Labels: The Truckers' Convey

We're fools if we don't see who the driving forces are behind modern conservatism, Cap.

I have a hard time putting the two words "modern" and "conservatism" together in the same sentence, Owen. Once Mr. Harper brought his Reform thinking into the old Progressive Conservative party, all bets were off as this move was intended to bring in a rabid evangelical base (which still exists) as well as take us back, socially, to the 1950's.

Its interesting to look back re my family history and realize that although both sets of grandparents (one evangelical and the other military/police) voted ONLY Conservative, my parents voted Liberal - they were entering adulthood during what they referred to the "dirty thirties" - and it was after WWII when Dad came back from overseas, they gravitated toward the old CCF and liked Tommy Douglas' thinking.

Given that everything is cyclical, it seems that right now, most voters are wanting a more moderate form of government and that seems to have manifested itself in leaving the current Cons in difficult circumstances. We're living in different circumstances right now and given those "cornbreads" that invaded Ottawa to change our leadership over to an unelected Governor-General, your guess is as good as anyone's as to where this nonsense will take us.

When the Conservatives ditched the adjective "Progressive," Lulymay, they stopped being modern.

Now that conservatism as explained by Edmund Burke has given way to the Alex Jones, Jim Jordan, Rand Paul and Louie Ghomert radicalism, tribalism reigns.

Fly the Canadian Maple Leaf
but please do write
"NOT the CONvoy" across the bottom .

They're not patriots, lungta -- no matter how vigorously they wave the flag.

Pierre Poilievre is a sign of our times where attention seeking individuals compete to provide the most outlandish quotes of the day.
It's Facebook on steroids , it's selfies on steroids.
We are entering an unnatural world perhaps ' matrix' of deeds and decisions devoid of the realities of the world!
To be Zombie is becoming a reality!