It May Not Survive 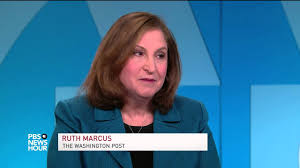 Ruth Marcus -- who writes a column in The Washington Post -- holds a law degree from Harvard. She admits that she was skeptical about prosecuting Donald Trump:

Not so long ago, I was squeamish — nervous about the consequences, immediate and long-term, of having any administration prosecute its predecessor and chief political rival.

Prosecuting Trump threatened to further divide an already polarized nation; a conviction, even if secured, would be deemed illegitimate by a substantial portion of the population. If acquitted, Trump could be emboldened and empowered, a martyr to a seeming Democratic vendetta.

And whatever the outcome, the fateful step of bringing charges against a former president based on his conduct in office could unleash a dangerous cycle of tit-for-tat political prosecutions and revenge prosecutions. This is the stuff of banana republics, not the American system of justice.

But she has changed her mind:

My squeamishness and doubts have yielded — if not to the absolute conviction that Trump should be prosecuted, then to the increasing belief that charges are warranted, and that failing to bring them would be more damaging to the nation than turning a blind eye to his effort to subvert democracy and prevent the peaceful transfer of power.

What changed my mind? The evidence. The facts amassed by the House select committee are damning, morally and legally. To understand their weight and import, think back to the second impeachment trial and wonder: What if we knew then what we know now?

We know now that Trump could have harbored no doubt that he lost the election, and resoundingly. This unwelcome fact was driven home to him by his attorney general, senior Justice Department officials, White House lawyers and his own campaign team.

We know now how extensively Trump pressured state officials to support his scheme to overturn the election. It wasn’t just the infamous call to Georgia Secretary of State Brad Raffensperger to “find” the necessary number of phantom votes but also his pressure on Arizona House Speaker Russell “Rusty” Bowers to support a slate of phony electors.

We know now that Trump’s exhortation to come to Washington on Jan. 6, 2021 — “Be there, will be wild” — was merely the desperate culmination of his frustrated attempts to forestall the vote-counting by other means.

We know now that Trump was secretly plotting all along to urge his supporters to march on the Capitol that day — that this was no off-the-cuff, ad-libbed exhortation but a premeditated, closely held plan.

We know now that Trump wanted to join the mob in marching on the Capitol — that this was his plan all along; that his lawyers believed this would be “legally a terrible idea for us,” according to Hutchinson; and that he was enraged when he was prevented from following through.

All of this blatant disregard for the law must be prosecuted. The nation may not survive the prosecution of Donald Trump. But it surely won't survive not prosecuting him.

Email ThisBlogThis!Share to TwitterShare to FacebookShare to Pinterest
Labels: The Prosecution Of Donald Trump

Not so long ago, I was squeamish — nervous about the consequences, immediate and long-term, of having any administration prosecute its predecessor and chief political rival.

If Biden had been elected 160 years ago...
-- "Sir, some people aren't happy with your presidential victory and don't consider the vote legitimate. Now they've attacked Ft. Sumpter."
-- "That's terrible. Well, we don't want to further antagonize them. It's only been a month since my inauguration, I'm sure i can win them over. Let's pretend it didn't happen and give up on my campaign promise to abolish slavery. I doubt we have the votes anyway."

Of course tRump is worthy of prosecution. But it should be second page or below-the-fold news.

We can walk and chew gum at the same time.

The big headlines should be supreme-court-expansion, ending (rather than provoking) foreign wars, climate action, the end of gerrymandering and a direct election of the President etc. etc.

Instead, the DEMs basically invented Russia-gate and now think that going after tRump will distract from the malaise that the voter are living in.

This will not end well.

Exactly, jrk. If other countries have been able to prosecute their former heads of state, the United States should be able to do the same.

What matters is the character of the man and the government he heads, Cap. It's always been that way.

It may indeed end badly, PoV. But they can't ignore what Trump has done.

This should not be a doubting Thomas moment. What-cha-ma-call-it needs to be charge under the letter of the law under the wonderful American law called the law of the Republic law. Then the UN needs to charge what-cha-ma-call-it with sedition against the rest of the world.. Anyong

I'm not sure how far the UN would get, Anyong. But prosecutors in the U.S. have more than enough to put him in jail. Their problem will be finding a jury that will do the same.

Their problem will be finding a jury that will do the same.
In a moment of relaxation we watched "Runaway Jury ' last night.
The movie could be a parody of any Trump trial.

Like other political pariahs in recent history; GW Bush, Tony Blair, Trump will likely walk away from this and likely profit; for that is the western system!

If that happens, TB, there will be no hope left for the United States.

There is little hope left for the West if we continue to mimic the ways of wayward nations we ceaselessly continue to condemn.
Monkey see, monkey do.

A vice principal I used to work with was fond of saying that "Stupidity is its own curse," TB.