The Real Face Of The Conservative Party 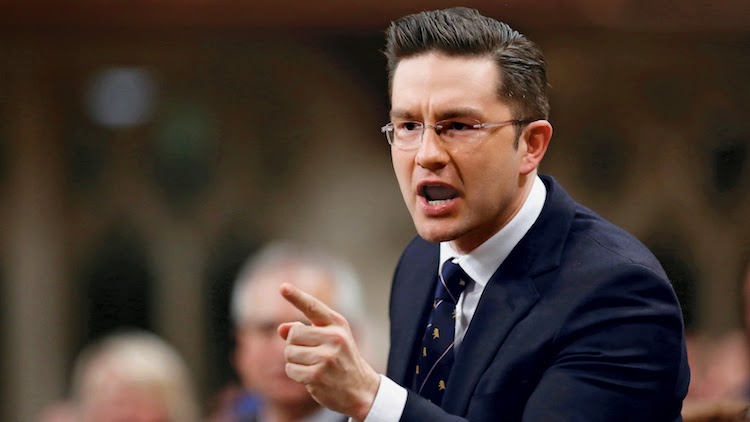 In his eulogy for Jim Flaherty, Stephen Harper said, "It is a fact that Jim, as fiercely partisan as he was, was also genuinely liked and respected by his opponents, liked by his enemies. That’s something in this business, something I envy – I can’t even get my friends to like me.”

It was Harper's pathetic attempt at humour. But, like his handlers' attempts to dress him in blue sweaters, or his own rendition of old Beatles songs, there's always something off key or flat when Harper performs.

As with any movement  built on the cult of personality, the leader wears a false face. With this prime minister, you know when you're getting the false face. If you're searching for the real face of the Conservative Party, you need look no further than Pierre Poilievre. Gerry Caplan writes:

This is a government passionately committed to not reaching out, to not seeking consensus. This is a government that scorns fairness and honour. In Lawrence Martin’s words, Mr. Harper is “known more for his classless smear campaigns against opponents than any degree of soft-heartedness.” You have to wonder how and why Jim Flaherty tolerated it for so long.


With Poilievre you get the real thing without the blue sweater -- and without the lame attempts at humour. Poilievre is all vengeance all the time. He is what the Harper Party is all about.

Exactly, Dana. But no one in the Conservative Party is going to slap his face.

What a pathetic people we are that we tolerate this shit.

It's arrogance personified, thwap. And we live with it.

"I can’t even get my friends to like me.”
Perhaps one of the few times that he was close to telling the truth, Humor can often be self depreciating but in this case it was not funny but perhaps accurate?

It was supposed to be funny, Rural. But it was one of those lines that cut to the quick. The man called attention to his his prime weakness.

Before Poilievre first ran for federal office in 2004, Pierre was co-founder of 3D Contact Inc., an Alberta polling and campaign management company that also offered automated calling *[ROBO - CALLS]* to its stable of conservative candidates. This gives him the best qualifications to run the Pierre Poutine scam, his alter ego. I know full well this is circumstantial but when you destroy Election Canada's ability to expose yourself and your robo-call scheme as they are closing in, I see it as less of a coincidence and more as a battle plan to continue using the robo-calls scam to steal elections.

Vengeance is right Owen that is exactly what Pierre Poilievre is using his unfair elections act for. He almost got caught and the robo-call mystery could have been unraveled had either the conservatives cooperated or if Elections Canada had more power. The conservatives have not had a serious crack - yet, but Pierre Poilievre-Poutine (my belief) made damn well sure that EC will never touch him while he is politically alive. This I believe is the true purpose behind the 'act' to limit EC's powers for two reasons; so Pierre wouldn't be caught and to capitalize on robo-call crimes for future elections.

Let's look at the facts; Harper has in fact a minority government as far as vote count vs. eligible voters goes around 20% this is not a comfortable majority government. This means Harper's crowd has to be uneasy about future job prospects. They say you can tell allot about a person by the company he keeps; although Harper has not been implicated personally yet in anything that can stick (Duffy claims Harper was directly involved in the senate scandal) he has surrounded himself with people who are willing to break the law so he does not have to.

Harper has an uneasy majority and the liberals under Trudeau could easily topple his government all the conservative know this and that is why Trudeau is under round the clock surveillance for any faux pox he may or may not commit. Harper only came to power because of the dissolution of the liberals.

Pierre Poilievre Poutine veteran robo-caller back with a vengeance.

An interesting theory about the identity of Pierre Poutine, Mogs. You can bet that the Harperites are doing everything they can to shut down Elections Canada.

Its good that Harper, the so called chess player is sacrificing a pawn like Poilievre.. that's his 'royal' trench warfare style. Send a junior officer over the top to lead a useless charge.. and get taken out by grapeshot or a musket ball or a machine gun. Heroic !

Its becoming incredibly evident that there are far more sociopaths and outright cowards and sellouts in the apparatus that has taken over our federal government.. than we could have believed possible.

Will Canadians recognize them for what they are? Its hard to believe a majority of Canadians will fail to take notice.. much less reward malice, failure, fraud, secrecy, cowardice, greed, omnipotence, entitlement and arrogance.

It is remarkable that so much rot has manage to congregate in the same place under one man, salamander.