The Rich Get Richer -- But Nobody Else Does 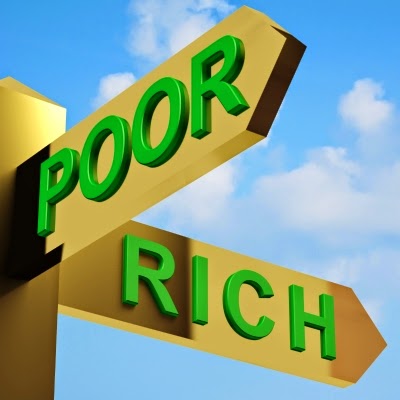 That's the conclusion of a report which was recently released by the Canadian Centre For Policy Alternatives. According to the Canadian Press:

The country's 86 richest individuals and families — or 0.002 per cent of the total population — are getting exponentially richer and now have accumulated as much wealth as the country's poorest 11.4 million.

That's more than in 1999, when the richest 86 had as much money as the poorest 10.1 million and enough to buy up everything in New Brunswick and still have about $40 billion left over, according to the report, to be released Thursday.


It looks like wealth inequality will be an issue in 2015:

Statistics Canada also showed wealth gravitating to the top. While median net worth rose almost 80 per cent since 1999 to $243,800 per family unit, the top 40 per cent possessed 88.9 per cent of total net worth, leaving the bottom 60 per cent with a mere 11.1 per cent of the pie.

Eye-opening was the data that showed the poorest 20 per cent of family units had more debts than assets.


The Harper government will continue to talk about averages. But it's clear that wealth in Canada is increasingly skewed -- and that doesn't bother the Harperites in the least.

For them, the present state of affairs is simply the way of the world.

The divergence is accelerating you can hear the sound of the dollars being sucked upwards by the Harpernado...


Ah at last its the bottom of the barrel, now what?

Now the economy collapses from the bottom, Anon. Strange. That's exactly what happened in 2008.

They missed that memo.

Hi, Owen. I wonder how Trudeau or Mulcair can hope to redress inequality without resorting to progressive taxation solutions. If they're to be honest with the public they'll have to admit that most inequality is neither merit-based nor market-driven but a function of government tax policy, subsidies, privileges, grants and deferrals.

Pricing natural capital and recouping its value from commercial consumers would be a fine start. So too would be levying realistic royalties on resources and cancelling deferrals for costs of environmental remediation. Still, at the end of the day, you have to tax income and wealth.

Who has the courage for such things?

With thousands of jobs vanishing and TFW taking resource and other jobs, the situation will only become worse. Many Canadians have given up searching for jobs.

A working economy is a healthy economy. Harper as a so called economic wizard, doesn't know this? Giving jobs to foreigners who, send all of their money back home. That money isn't even spent in Canada. How does that benefit this country?

The myth of a shortage of labor in this country is just that, a myth.

One evening, trying to order in a pizza? After 10 minutes of speaking with a foreign worker, I had to give up. I couldn't understand a word she was saying. I don't order my pizza, from there anymore.

The cost of living is going through the roof. Wages have no where near kept up. An older lady was looking at a roast of beef, for $67.00. She said her parents didn't get that much, for an entire cow.

Citizens have no money to spare, to purchase anything. When you see such as hydro, going up to a 60% increase? Hydro in BC, just went up another 9%. There are more increases coming.

Hi, Mound. Paul Krugman has an interesting column today about how low inflation serves the oligarchs.

After World War II, controlled inflation eliminated debt. It's true that inflation went wild in the '70's; but that was a result of the oil shocks -- which benefited the world's most powerful oligarchy.

All that money going to the top sits in banks, Anon. It doesn't circulate and the economy fails. That's Economics 101.

I'm pretty sure Harper takes every curse that comes his way, Owen. :-)

"For them, the present state of affairs is simply the way of the world."

A world which they have at this time the limited power to change for the better for all and they refuse to use it. It is a wonder that there would be any support whatsoever for Harper and his pit crew among average Canadians. Harpers swollen pride loves to pontificate on how he represents the majority of Canadians, nothing could be farther than the truth. He was elected with less than 24% of the popular vote and based on his performance in doing everything possible to increase the rich poor divide he is alienating masses of Canadians.

Harper as analogy is operating a locomotive full seeped ahead called Canada's economic train. The tracks ahead were removed some time ago when it became obvious to most economists the theories that drove western economic policy were just that flawed theory. Harper blindfolds himself to this in his ineptitude to real world that requires attention and feedback to change in a timely manner;

"The Harper government has managed to convince many Canadians that it is a "steady hand" when it comes to the economy. This, of course, is a falsehood.

The Conservatives have deployed a well-oiled communications plan using catch phrases like "we're focused on jobs, growth and long term prosperity" or branding the federal budget as the "Economic Action Plan."

The Conservatives spend tens of millions of dollars of your money each year on partisan advertising -- selling Canadians a very tall tale.

Here are actual facts you will never see in one of those Conservative "Economic Action Plan" ads this coming fall and beyond -- usually during a hockey game.

• Stephen Harper has the worst record of economic growth of any Prime Minister since RB Bennett and the great depression.

• Under Stephen Harper, household debt has exploded. The average household debt-to-income ratio (i.e., the amount of debt the average Canadian household owes for every dollar of their annual disposable income) has risen from $1.31 to $1.64 -- which is where the United States was before the housing market crashed.

Although he has since reversed himself completely on this policy, it was too late to avoid the damage he caused."

Yes the "Economic Action Plan" ads, there are giant billboards advertising supposed projects here in rural BC on the western slope of the continental divide. They are situated on the Crow's-nest Highway # 3 a major secondary east-west transportation corridor second to the TCH Highway # 1, the southern route. Those billboards sit at junctions with rural roads claiming 'action' when the side roads are followed attempting to find these 'projects' none are found. The "Economic Action Plan" is simply wool pulled over the eyes of the passerby traffic on the main road. Harper infatuated with his "Economic Action Plan" ads did not tell us the employment to advertising agencies and executives; billboard makers and of course the billboard installation company, yessiree over a million related jobs were created across Canada by this billboard placement 'action plan.' Whoopee now I understand Mr. Prime Minister!

An early look at our "economist" PM;
"Harper studied philosophy and read Adam Smith, the 18th-century thinker who wrote of the “invisible hand” of the marketplace. He soaked up the work of ... Edmund Burke.... Harper ...pored through the work of Friedrich Hayek, whose “Austrian school” of economics promoted the benefits of a free market. ..studied the success of British prime minister Margaret Thatcher..... He was 28 years old — in the political world, just a kid. Yet here, in 277 words, was the foundation for a principled philosophy he hoped would shake up politics. Among the proposals:
1. Offer strong “conservative principles” as an alternative to the “NDP-Liberal-Red Tory philosophy” so that Canada would be a democracy of “real debate, not ‘sacred trusts.’ ”
2. Create a party controlled by “private citizens, independent of its politicians and political insiders.”
3. Replace the “carnival atmosphere of political conventions” with “solid candidates” and policy — “not image and personality.”
4. Unveil the “mysteries of party solidarity” by publicly revealing how MPs voted in caucus before a unanimous position is taken in the Commons.
5. Ensure the “termination of patronage appointments and positions, as well as of the public funding of special interest groups.”
6. Implement a “new economics” of “smaller government, regional diversification … privatization (and) fair trade.”
http://o.canada.com/news/national/stephen_harper_day2/
Snap shot 2006;
"A Brief Summary of Stephen Harper the Amateur PM:
During the 2006 Canadian Federal Election, Stephen Harper and the Conservative Party of Canada had a 5 point platform:
1. Political Accountability.
2. Tax reduction (the GST rebate.)
3. Crime Crackdown.
4. Wait-time Guarantees
5. $100 a month for child-care.
Prime Minister Harper picked Jim Flaherty to be his finance minister. After a $6 Billion hidden deficit in Ontario...
Stephen Harper has his Master’s Degree in economics. The Harper conservatives love to repeat this bit of trivia. Even though his degree is from 1993, he has written no scholarly papers on the economy and a little bit has changed since the early 90s..."

"The theories that said that markets work perfectly were all based on very simplistic models of perfect competition and perfect information. My own work we show that the reason that when there is asymmetric information, the reason that the invisible hand often seemed invisible, was that it wasn't there. And I don't think today anybody would claim that the pursuit of self-interest by bankers, which is sometimes called greed has led to the well-being of all of society. And yet this was the central notion taught in almost every graduate school in the country." -Joe Stiglitz - Joe Stiglitz Slaps The Invisible Hand

Including Harper he appointed Mr invisible hand himself Jim Flaherty former finance minister who left a $6 Billion hidden deficit in Ontario and;
"Speaking of Debt
• Fact: Between 1996-97 and 2005-06, the Liberal government paid $81.4-billion against the national debt.
• Fact: The federal debt in the fiscal year 1996-97 was $562.9-billion. By the time the Liberals left office in 2006, it was reduced to $481.5-billion
• In contrast, by the year 2014-15, the Conservatives will have added $176,400,000,000 to the national debt. Let me say that again, Stephen Harper has added and will add $176,400,000,000 to our debt.
• Fact: The Conservative federal debt in 2008-09 = $457.6-billion.
• Fact: The expected Conservative debt in 2014-15 = $634.0-billion (forecasted).
• Fact: 24% of the total accumulated debt since Confederation was amassed under Stephen Harper, this just since 2008. This is the real and true economic and fiscal record of the Harper era." http://www.huffingtonpost.ca/sean-casey/harper-debt-economy_b_3976972.html
Today? Blame it not on Harper but the 'invisible hands' cons-piracy. Wait until a real world audit is done on Harper, as far as political accountability, it will have to wait until after Harper leaves office.

Thanks for the link, Dana. The book sounds like a good read. As the review says, "economic trends are not acts of God."

It serves the oligarchs purposes to float the idea that they are the modern equivalents of Noah's Flood.

Your point about Harper reversing the annual Martin surpluses into annual deficits is most important, Mogs.

As in so many other areas, he makes consistently bad choices.

Owen, I really wonder about the behind the scenes; are they are having a party back there in Ottawa. How can they keep straight faces while in public?

Nothing the man or his government says is true yet they repeat it like a mantra over and over.

They're selling snake oil, Anon. And they truly believe that most Canadians are rubes.

Unfortunately, there are a significant number of Canadians who are rubes.