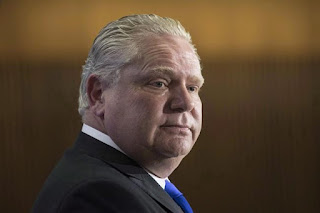 The Canadian Press reports this morning that Doug Ford's campaign to be the premier of Ontario will not include a bus for the media:

Ontario's newly minted Progressive Conservative leader will not bring journalists with him on the campaign trail this spring, a rare move experts say suggests the Tories are keen to keep the unpredictable populist politician out of the hot seat as he takes on two more seasoned rivals.

Doug Ford's team said Wednesday the former Toronto city councillor will not have a media bus following him as he criss-crosses the province ahead of the June election, an accommodation traditionally offered by Ontario's party leaders to facilitate coverage while they hold multiple daily events in different cities.


This is not a new strategy. It reeks of Stephen Harper's vetting of people who showed up at his campaign rallies. And, of course, it's utterly Trumpian. Ford sees the media as his enemy; and he's going to limit his contact with them. His spokeswoman -- are you surprized? -- is spinning another line:

Spokeswoman Melissa Lantsman said Ford's campaign events will be broadcast online and his itinerary will be released for media interested in covering them in person.

"Most media outlets have shifted to covering events from their office and relying on live feeds. It is in our interest to have as much media coverage as possible and will do everything we can to ensure our events are streamed online to assist in that," she said in an email.


No one should be fooled:

And while this approach may prove effective politically, it's concerning for democracy, they say.

"He is attempting to bypass the accountability function of the free press by limiting access to his campaign. This will not prevent coverage, but it alters the degree of access and creates a different, more opaque degree of transparency in the campaign," said Tim Abray, a former journalist and current teaching fellow in political science at Queen's University.


Ford's handlers are well aware of his ignorance. And they are trying to keep it under wraps. Mark Twain wrote,"If you keep your mouth shut, people will only think you're stupid. Open it and you remove all doubt."

The reporters on the bus would remove all doubt.

Image: ipolitics.ca
Posted by Owen Gray at 9:20 am

Email ThisBlogThis!Share to TwitterShare to FacebookShare to Pinterest
Labels: Ford And The Media

When you've got an inexperienced candidate with a shady past, you keep him as far away from the media as you can. That goes double when he's an intellectual lightweight with a short fuse facing an election that's his to lose.

Martin Regg Cohn has a rather damning indictment of Ford in his column today, Owen: https://www.thestar.com/opinion/star-columnists/2018/04/04/why-doug-trump-and-donald-ford-are-cut-the-from-the-same-froth.html

Precisely, Cap. Ford's handlers know that their man could easily blow himself up.

Thanks for the link, Lorne. The parallels between the two men are frightening. Cohn is right to ask, "Can we tell them apart?"

.. someone who shall remain not or ever named, has a term for one of my worst dietary failures.. she or he describes it as processed mystery meats.. and it fits Doug Ford like a rubber glove. Apologies re the mixed metaphoring.. I have met the beast and trust me, he is a master of bonnhomie and glib.. excudes friendly n neighborly.. and 'here is my private cel number' call anytime, I am on your side.. blah n blah

Sliced salami, liverworst.. baked chameleon au toast
an order of raw rattlesnake on the side please
(apologies to all snakes who slither)

I bear mystery meat Doug no malice.. no worse or better than Ray Novak, Nigel or his late brother Rob, or Joe Oliver. Career political animals like Jason Kenney or Andrew Scheer.. get a paycheck and pension .. but its to laugh that anyone might embrace these political droogs (please excuse the Clockwork Orange reference) They have to play for some team and thus wear the team sweater.. sit on the bench or slash at opposing partisans..

.. a 2nd thought ..
Imagine these droogs as librarians
or teachers in classrooms
Driving a bus or truck
or operating an elevator even
or a nurse in an old age home
or a police officer

These folks are the 'defectives'.. the twisted
people you want nowhere near you

You, who can probably recognize & fend the fluckers off, OK
but much less, can never allow them near your family or friends
who may not see such dangerous cretins coming
or worse, even believe it possible
the malice is deeply embedded in them.. sadly

Doogy's announced he's ditching on the first candidates debate. I guess rough, tough Ford's too chicken to go head-to-head with the ladies. Not a promising start in my view.

I wonder if we're losing our street smarts, Sal. It used to be pretty easy to identify a thug when you met one.

It seems pretty obvious that Doug's afraid to open his mouth, Cap. Not a good sign.

... oh they aint hard to spot
they like lamprey eels on a troutling
or warble fly on our cattle..
large parasites..
a clinging

Then a number of us must have developed a tolerance for thugs, Sal. Surely, that can't be a good sign.


You guys make me grateful there are 2,500 miles and three (or is it four) mountain ranges plus a stretch of ocean between me and your man Ford. My sincere condolences to you and to all the people of Ontario except for the folks who would actually vote for this loon.

Doug calls his supporters "Ford Nation," Mound. They're not a nation. They're a cult.

It's a bit like the 2016 presidential election. Among all the possible options, the Americans had to pick Trump and Hillary, possibly the two least liked candidates imaginable. Now you've got Wynne and Ford and the recycled option, Horwath. Sounds like slim pickings which often translates into lousy turnouts at the polls. It sounds as though, should Ford prevail, he'll sail into office on the back of Wynne's unpopularity. Harper played a big role in Trudeau's win.

That's why a vote in Ontario has to be a strategic vote, Mound. Idealism has nothing to do with one's choice.

The National Post’s London Free Press has an editorial today (4/6) that explains why Ford’s decision is just so right! “Ford can’t put brakes on media coverage”. Worth a read; spin at it’s best. Sorry I couldn’t link. The opinion piece is by Adrienne Batra, Mac

The story is also in the Toronto Sun, Mac. The way the Sun tells it, Ford is doing the media a favour. He's saving them money. That fits with Ford's pitch. He's saving everyone money.