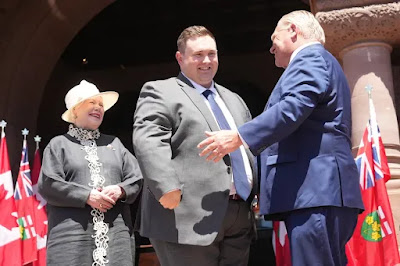 A week ago, Doug Ford introduced his new cabinet. And, lo and behold, his nephew, Michael has a seat at the table. Marcus Gee writes:

Mr. Ford and his nephew, Michael Ford, insist there is nothing untoward in this. No, no, no. All perfectly fine. Though Michael has just been elected to the legislature for the first time, at the ripe age of 28, he is eminently qualified to sit at the cabinet table with his uncle and all the others. After all, he was a Toronto city councillor and a school trustee before that.

“I think he’ll do an extremely good job,” the Premier said.

Asked by reporters if this might just possibly be a case of nepotism, Michael himself said: “I completely dismiss that.” His experience representing one of the most diverse communities in one of the world’s most diverse cities made him well equipped to serve as Minister of Citizenship and Multiculturalism. Family ties had nothing to do with it.

Mr. Ford came to office accusing the former premier, Kathleen Wynne, of riding the gravy train and dishing out goodies to her friends. But Ford insists there's no gravy here:

This is a whopper of gargantuan proportions, designed to be so big and so bold that it will blind the audience to its essential untruth. Michael Ford owes this appointment – no, his whole political career – entirely to his family connection. He would not be in cabinet if he were a Young or a Romano. In fact, he would never have been elected to any position at all without the Ford name.

Michael is fortunate enough to be a member of Ontario’s best known political dynasty. He followed in the footsteps of his grandfather, Doug Sr., who was a Progressive Conservative MPP in the 1990s; his uncle, Rob, Toronto’s most notorious mayor; and another uncle, Doug, who was a city councillor and a candidate for mayor himself before becoming leader of the PCs.

The Fords’ home turf in North Etobicoke, a suburb in Toronto’s northwest corner, is the closest thing to a family fief in Canadian politics. A Labrador retriever named Ford could get elected there.

From Michael Ford's entry in Wikipedia: "In 2014, Ford changed his surname from Stirpe to Ford, and removed Aldo from his given name.[3] His father was convicted of manslaughter in 2009 and convicted of attempted murder in 2012. He is currently incarcerated and serving an 18-year prison term for attempted murder.[4]"

I'm sure Michael's high school diploma make him eminently qualified for any cabinet spot. The only surprise is that Doug didn't make him education minister. He's at least a qualified as Snobelen.

I understand, Gyor. But putting a high school dropout in charge of the Ministry of Education sends a message about how much the government values education.

It reminds me of when Harper made Kellie Leitch the Minister for the Status of Women, and she argued vehemently against removing the tax on menstrual products because it's not fair that women should get something extra that men don't get!! Being female didn't make her remotely qualified for a job advancing women, definitely, but it would have been even worse had he put a man in that position. Being part of a group that has a lived understanding should be a necessary condition of a ministerial job, even though it's clearly not a sufficient condition. A white guy running the multicultural portfolio and a private school and homeschool team running the education portfolio further illuminates Ford's willful incompetence as a leader.

It seems that the chief qualification for a ministry these days, Marie, is to know nothing about it.